Each August at the University of Oregon, Eugene, you will find a devoted group of conference attendees learning a critical thinking skill to bring back for
use in their everyday lives. The Skeptic’s Toolbox began in 1992, the brainchild of then-psychology professor Ray Hyman. His goal, both then and now, was
to give skeptics the tools to become better critical thinkers. His approach is different than a traditional conference; he uses hands-on participation,
splitting the attendees into teams that are able to spend quality time discussing the readings and lectures. This year’s topic was “Case Based
Skepticism—Using Model Cases to Deal with Dubious Claims.” 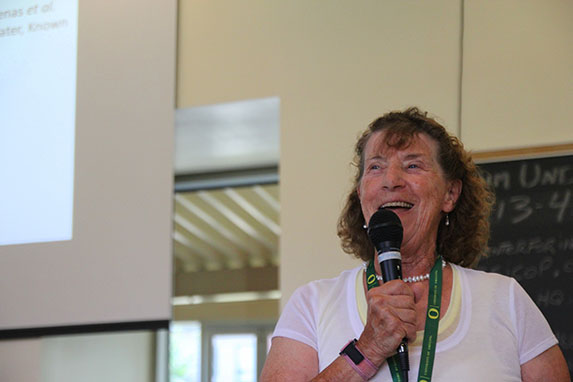 All photography by Susan Gerbic.

Assigned to the attendees this year were several journal articles on various topics: blood pressure changes using chiropractic, acupuncture and asthma,
homeopathy, Rhine’s investigation of a mind-reading horse, and other readings pertaining to the ideomotor effect, which included table-turning, Ouija
boards, and pendulums. Plus one of my favorite investigations, Clever Hans.

Each year participants are divided into groups and are assigned specific papers to present on during the last day of the conference. Throughout the
Thursday–Sunday conference the faculty lectures on their expertize concerning case-based learning. Breakouts are scheduled in between lectures for teams to
discuss and work on their presentations. The faculty sits in on these discussions to act as resources. 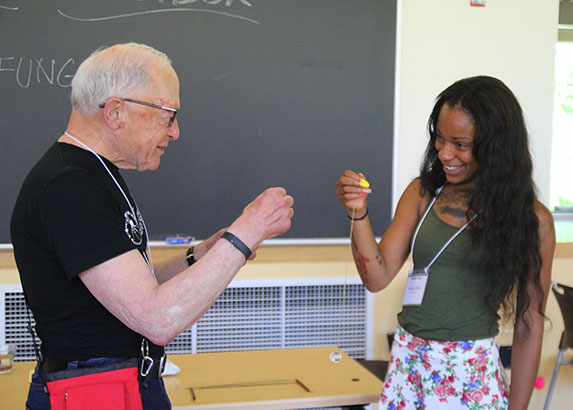 The presentations on Sunday show that the audience received much more than they would from a typical “sit and listen” conference. It was obvious that they
understood the readings and were able to present their knowledge back to the attendees often in a comical, creative way. A byproduct of their interaction
was that participants bonded with each other; even first time attendees felt like old friends by the end of the event.

The Toolbox faculty centers their lectures around the conference theme…

Ray Hyman—The last holder of Stanford University’s “spook chair” has investigated many parapsychology “events.” He is probably best known for his research
into the Ganzfeld experiment, University of Arizona’s Professor Gary Schwartz and the Stanford Research Institute’s interest in Uri Geller. At this year’s
Toolbox, Hyman used Oskar Pfungst’s Investigation of Clever Hans to show attendees how detailed and exhaustive some investigators are in studying claims.

Harriet Hall—Retired family physician from the U.S. Air Force, Hall writes about medical quackery on the Science Based Medicine blog, Skeptical Inquirer, and Skeptic magazines as the SkepDoc.

Jim Alcock—Professor of psychology at York University (Canada) and a member of the Editorial Board for the Skeptical Inquirer magazine, to which
he frequently contributes. Alcock has investigated several parapsychology cases, including Robert Jahn and the Bem experiments.

Lindsay Beyerstein—attended the Skeptic’s Toolbox when she was fourteen because her father Barry Beyerstein was on the Toolbox faculty from 1992 until his
death in 2007. Lindsay is a writer and a host of CFI’s Point of Inquiry podcast.

This year’s keynote address was from Loren Pankratz whose lecture “Going Back to the Ancient Greek Oracles for Lessons on Coping with Dubious Claims” set
the theme of case based skeptical investigations. Pankratz has been involved in many investigations, Posttraumatic Stress Disorder and patient deception,
related to his work as a psychologist at the Portland, Oregon, VA Medical Hospital. He is also an expert on Munchausen syndrome by proxy.

Guest lectures were presented by Richard Wackrow and Jerry Schwarz, and a “How to Fake UFO Photos” lecture was presented by CFI–LA Executive Director James
Underdown. 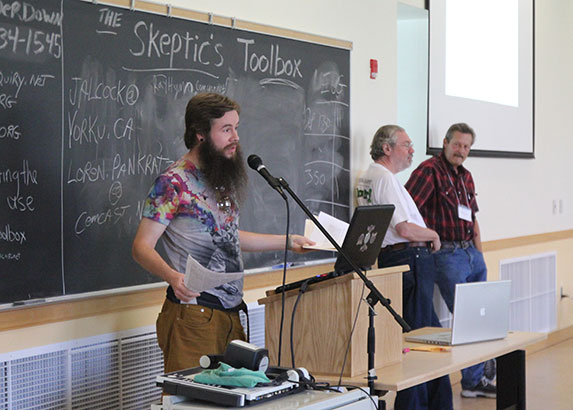 This year’s In the Trenches Award was given to Jerry Schwarz for his work with the San Francisco Bay Area Independent Investigative Group (IIG). The IIG
offers a $100K prize to anyone proving under test conditions evidence of paranormal ability. Schwarz is a lead investigator working with applicants to
write a testable protocol. Schwarz is also a longtime Toolbox attendee and has been active in the S.F. Bay area skeptical movement for many years.

Each year the Oregonians for Science and Reason organizes the Master’s Challenge (named for Herb Masters who is a long-time attendee) and offer
scholarships. This year four students were able to attend because of the scholarships, one of whom works as a “explainer” at the San Francisco
Exploratorium. 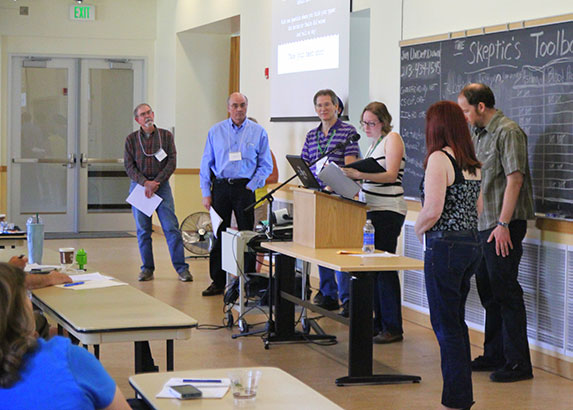 Readers who have been following my work as a skeptical activist using social media and crowd-sourcing may not understand why I consider attending
conferences an act of activism, and strongly advocate attending your local skeptic’s in the pub or SkeptiCamp events. Over and over people tell me they
originally went to the conference to listen and learn from the lectures. By the end of the conference they tell me that they will return because of the
people they met. It’s like a “rationality vacation.”

We need these face-to-face gatherings to reignite the flame, kick the embers a bit and get us thinking and networking with other people. Meeting
like-minded people oftentimes is the first step to activism. Some days it might appear that critical thinkers are outnumbered in the real world, but we
know our best asset is our people. And armed with current technology and sharpened critical thinking skills, if we focus we can educate and enlighten.

Visit the Toolbox page for downloadable readings—videos and photos available here at Lanyrd.