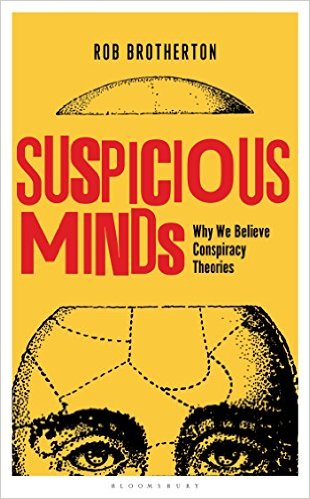 Rob Brotherton’s Suspicious Minds: Why We Believe Conspiracy Theories (2015) follows a trend in the literature on conspiracism that has increasingly moved away from seeing conspiracy as being a feature of one side of the political spectrum and toward viewing it as a capacity within everyone with a human brain. Brotherton, an academic psychologist and science writer, places a lot of the recent scholarship on conspiracy theory in context, especially the growing body of relevant research in psychology.

Brotherton’s focus on the research moves away from a tendency started by Richard Hofstadter, who wrote about right-wing conspiracist movements in his classic essay, “The Paranoid Style in American Politics” (1964). In doing so, however Brotherton goes back and defines, for the purposes of his discussion, the conspiracist “style” and what separates theories from conspiracy theories. He identifies six features that are common (though not always diagnostic) of conspiracy theory:

These points are pretty straightforward, and Brotherton’s description of the conspiracist style, I think, builds on points made by Michael Barkun that in conspiracy thinking, “nothing is as it seems, nothing happens by accident, and everything is connected, with no room for accident or coincidence.”

Whereas Barkun looks at the history and development of specific conspiracist narratives, Brotherton focuses on why such narratives arise in the first place and looks to psychology for those answers. In part, Brotherton seems to be providing a follow up to the work of Joseph Uscinski and Joseph Parent, whose American Conspiracy Theories (2014) looked at evidence that suggests that a constant drumbeat of conspiracism is always at work in American popular consciousness, as evidenced by decades’ worth of letters to the editor published in major American newspapers. Parent and Uscinski’s study indicates that conspiracy theory is not an aberration in American political thought, as would be suggested by Hofstadter’s use of the word paranoid in the title of his seminal essay.

Brotherton takes the next step and ascribes the tendency to psychological factors that operate on everyone. Conspiracy theory is not the domain of a partisan far-right fringe in this formulation, but an inevitable outgrowth of normal human psychology and predispositions. He illustrates this point with new studies that illuminate psychological principles all skeptics should be familiar with. He then shows how these principles are at work in a variety of conspiracy theories.

Rob Brotherton’s Suspicious Minds: Why We Believe in Conspiracy Theories is an easy, fun read and provides a valuable synthesis of the growing body of scholarship on conspiracy theory.