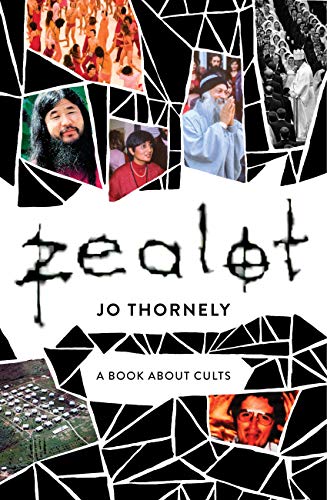 Why would anyone join a cult? Maybe they’re unhappy with their current religion, want to change the world, are disappointed with their lives … or maybe they’re just trying to make sense of what’s going on around them. Perhaps they just want to give themselves the chance to have sex with aliens.

Once they’re in, however, it’s very difficult to leave, and that’s what led Jo Thornley to write the new book Zealot: A Book About Cults.

Jo Thornley: I’ve always been into, until now, the separate topics of true crime and religion. I used to be religious and then sort of backed away from that calmly and respectfully but then became interested in different types of religion and the way people believe things, so the combination is quite obvious, then, when you look at cults.

Coming from writing all sorts of different things, I thought the stories involved with cults were also just absolutely fascinating and I wanted to research them and then write about them and discuss them with my friends, so I figured if I gave them a cheese platter and a microphone, they’d be more willing to.

Kylie Sturgess: What are your thoughts about the difficulty of narrowing down the definition of cults as you do at the start of the book? Are there any particular guides that helped you?

Thornley: None at all because nobody wants to commit to one! I mean, I looked at some of the red flags, and it’s extremely difficult to define a cult without also describing a religion, so I think that’s why it’s generally been avoided. There’s no law against being in a cult I think for the same reason that it would be very, very difficult to draw the line between established mainstream religions and cults, so legally and theologically and psychologically and philosophically there’s no clear definition.

But I’d say some of the red flags are things like the amount of control that cult members are subjected to and the perception of how bad it will be when they leave, and also I think how much—aside from their autonomy—how much they’re expected to contribute either in work or money or virginity or other things.

Sturgess: Do you think with advances in technology it’s easier for people to find out about and avoid cults, or do you think there are still elements that lead us to join these groups regardless?

Thornley: Yes and no. I think that good information and factual information is much more broadly dispersed, but by the same token, so is false information and dogma and conspiracy theories. They’re more freely and easily distributed as well, so I think it depends on what you’re looking for, the kind of information you’re looking for. Cults in their heyday (particularly in the ’60s through the ’80s) were isolating themselves in compounds. Now people are already self-isolating—often in front of their computers and with their groups that they find online—so there’s still an “us and a them,” but now it’s more of a theoretical border or fence than an actual one, so people will still seek out the information they need and be influenced strongly by others in small online communities.

Sturgess: How difficult is the balance between being fascinated and horrified, as you put it, when telling the tales of cults and their behavior?

Thornley: Disturbingly easy, I’m afraid to say! Partly because of the stories that I have always been interested in. I was quite interested in reading about serial killers but also about how religion and belief can sometimes go wrong that I … well, I do find joy when people are caught out, and in a small way I might like it when someone I know is caught out in a lie because I have a quite spiky sense of justice and I like it when justice is done.

I am dissatisfied by stories about groups such as NXIVM, a group in the U.S. that up until recently was semi-untouchable because they were so litigious. There are other large American groups that I won’t even mention in the public forum, generally speaking, because they’re litigious, but it’s so frustrating and leaves me feeling icky when they’re not caught.

But it does make me feel good when they’re unraveling and caught out in lies or power exploitation, so I think that’s probably how I surf the line between horror and satisfaction and, I suppose, in an awful way, entertainment. I like seeing the bad guys get done.

Sturgess: It’s interesting how many cults have moved out of the public eye and have been mostly lost to time. I mean, the Raëlians might be familiar to those of us into UFOs, but I personally have never heard of Colonia Dignidad. Was it difficult narrowing down which cults you were going to deal with for the book?

Thornley: I picked the ones that made my mouth fall open the hardest, I think, but narrowing it down … because I’ve covered, now, I think twenty-six cults on the Zealot podcast and only ten in the book. But I’ve read about more than that, so I had to pick some criteria for inclusion in the book. One of the big ones was whether or not they had any ties at all to Australia.

The two you mentioned, the Raëlians and Colonia Dignidad, didn’t have a connection to Australia, but I thought on the one hand the Raëlians were some nice upbeat relief in the book, and there’s not many cults you can say that about; they haven’t really done that many bad things. Colonia Dignidad I think I included because it’s not well known but it’s so heinous. I mean, you’ve got violence, Nazi torture. … It’s kind of like the pick and mix of horrible qualities.

But others in the book, most of them have an Australian connection in some way. Aum Shinrikyo tested their sarin gas on a remote sheep farm in Western Australia. The Branch Davidians, David Koresh, came out to this country to recruit and got a number of Australian members and, of course, The Family—the cult that was based in the state of Victoria.So having to choose which ones went in the book was, I think, based on the most unbelievable and those with an Australian connection.

Sturgess: Should we be discussing these groups in educational settings, kind of like consumer rights but focusing on spiritual and emotional health?

So, I think any teachers that do choose to include discussing cults in their lessons about critical thinking would have a rapt audience. and the students would probably keep talking about them through lunchtime! But it always comes down to critical thinking and just being aware of how information is disseminated and how it’s made to seem important when it might be misleading or just plain false.

Zealot: A Book About Cults by Jo Thornley is now available in bookstores and online.

This interview has been lightly edited for clarity.