The promotion of science and reason is not without its challenges.

are being sued by the wealthy evangelical preacher and “witch hunter” Helen Ukpabio who has dubbed herself a “Lady Apostle.” Mrs. Ukpabio claims to
have expertise in identifying children and adults who are possessed with witchcraft spirits and in how they can be “delivered” from those spirits.


The BHA has called for Ukpabio and others like her to be banned from coming to the UK on the grounds that they are a threat to child welfare and their
practices are not conducive to the public good. For this interview, I spoke to Pavan Dhaliwal. 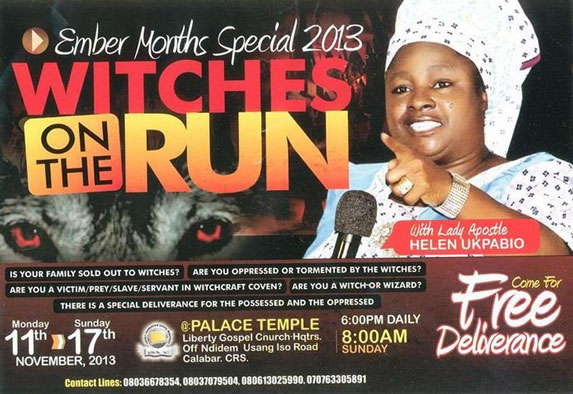 Pavan Dhaliwal: I’m Pavan Dhaliwal, and I’m the head of public affairs at the British Humanist Association, and the vice president of the European Humanist Federation.

Kylie: What kind of work does the British Humanists Association do?

Pavan: There are three strands to our work. We operate for those people who reject superstition and want to live their lives based on reason and humanity.
That’s about 50 percent of the population here in the UK.

We have our policy and lobbying arm, which is what I run. We lobby in Westminster, and the European Parliament, and the United Nations. We have an
education department, which is more about the promotion of humanism and a humanist life stance. Then we also conduct humanist ceremonies, so weddings,
namings, funerals.

Kylie: What’s the current situation that the British Humanists are facing?

Pavan: It’s quite an unusual situation, not one that I thought that we would find ourselves in. We’re currently being threatened with litigation by a Nigerian
witch-hunter, Helen Ukpabio. She is threatening to sue the British Humanist Association for £500 million.

She’s trying to do it on two counts, on both human rights and defamation. She’s quite notorious, she is quite well known. She claims to be a former witch
herself, and she claims that she is able to exorcise children and adults of demonic possession.

Kylie: What’s the claim that she has got against the British Humanists?

Pavan: The claim is, in 2009 we published an article, along with our partners in Nigeria, the Nigerian Humanists, quoting from a book of hers. In the book she
was basically saying something along the lines of, “If your child wakes up in the night crying, and showing these particular symptoms,” we had said that
the quote said that the child is possessed by Satan.

What the book actually says is, “If your child wakes up at night and is displaying these behaviors, the child is possessed by vampires.” The difference is
between Satan and vampires.

Kylie: What are the difficulties defending human rights when it comes to paranormal and pseudo-scientific beliefs? Obviously, people like Ukpabio have many
followers…

Pavan: With her, it’s quite a simple case. This is something, which poses child safeguarding issues. The reason that this has come to light now, because like I
said, the original article was published in 2009, so it’s outside of the scope of defamation laws here in the UK now. They were changed after the Simon
Singh case. That only has an 18-month period in which you can claim defamation. Obviously from 2009, that’s now up.

She came to the UK a few months ago, and we wrote to the Home Secretary saying that her being here is not conducive to the public good, and it does pose
child safeguarding issues. She was advertising that if your children are possessed by witches, gnomes, mermaids, vampires, that she can exorcise them. It
becomes an issue of children’s rights there.

Obviously, everyone has the right to freedom of religion or belief. No one’s disputing that, but when those rights then begin to impinge upon other rights,
and also pose child safeguarding issues, that’s when it becomes a problem. That’s when we called upon the Home Secretary to revoke her visa, and from her
holding ministries here in the UK.

Kylie: Do you come across cases like this often?

Pavan: Not so much here in the UK. Our partners in Nigeria are working on this sort of stuff every single day. It’s their bread-and-butter work, trying to go
into villages in mainly rural areas to try and counter these sorts of superstitious beliefs.

I’m not entirely sure whether I could say it was a growing community here, but certainly there is a demand for these sorts of ministries here. Otherwise,
people like Ukpabio, because there are others like her, wouldn’t have a need to come to the UK to hold ministries here.

It is, of course, worrying. It’s something that now, I think, more and more is being brought to the attention of the authorities. Because there’s been a
few high-profile cases here in the UK, in the past, of child abuse, which have actually been quite clearly linked to these types of witchcraft practices.

Kylie: What are the British Humanists doing next about the Ukpabio case?

Pavan: We’re trying to put pressure on the government to make a statement that people like her would not be allowed entry into the UK if their intention was to
hold these type of ministries.

The reason that she came to the £500 million mark is that the article that we wrote got some publicity in Nigeria. She’s saying that this harmed her
reputation. Obviously, if we can do more of that, then that’s actually quite good.

She’s a very litigious woman. What she normally does is file these claims against very small grass-roots organizations working on the ground, so the effect
will be, effectively, to chill free speech, and to silence her critics. It’s obviously worked in the past, but of course we’re not going to fall foul of
those threats, which is why I decided that we should publish what she was doing against us.

Kylie: How can people help out?

Pavan: People can help out by going onto the British Humanist Association website, humanism.org.uk, and looking into
the work that we’re doing, but also by supporting these grass-roots organizations, who are the actually the people on the ground going into villages, going
into communities to try and dispel these myths.

It’s about awareness-raising, knowing that these things are going on, and not being afraid to actually talk about them.


The British Humanist’s site can be found at https://humanism.org.uk.