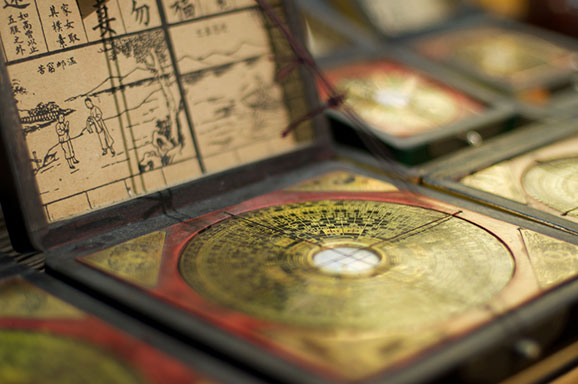 Dick Van Dyke’s home had terrible feng shui. Improper positioning had him stumbling, fumbling, and tumbling all over the house. The futon in the living
room had a particularly negative qi about it. To think of all the slapstick sitcoms we would be deprived of if feng shui were true…

If feng shui were true, already unbearable construction delays in major cities would be dwarfed by the demands of magnetism. The magnetic compass—built
specifically for the practice of feng shui—guides modern feng shui application, and would dictate giant, regular shifts in the world’s architecture. The
true magnetic north of our planet moves around like a cosmic stir stick in coffee, meaning that the proper alignment of a desk, room, or building moves as
well.

To optimize the flow of qi, whole cities would need to shift every so often. Counties that could not afford the grand re-alignments would undergo
terrible consequences. As magnetic poles wobbled, people would begin to feel sick and uneasy in their own homes. Others would experience piercingly odd
feelings of “oneness.” Culture would begin to adapt accordingly. Certain months of the year would bring a general “lack of wellness” to a society. Alerts
of shifting alignments would go out like air quality warnings. A neighbor’s house, now negatively positioned relative to your own, would affect you
personally. Like accusations of witchcraft in the middle ages, a world where feng shui was true makes condemnation of a neighbor as simple as “they make me
feel sick.”

With a reliance on the Earth’s magnetic field, true feng shui would drive a demand for consumer compasses. Smart phones would be outfitted with sensors.
Dinner guests would have ample reason to avoid a tour of your home if the compass said so. But compass reliance also makes certain parts of the world
uninhabitable. Building a positively positioned home at either of our planet’s poles, for example, would be impossible. With magnetic north so close, even
walking a few feet to the right or left in such a home would drastically change the relative alignments of the structures within.

If feng shui worked, the optimal layouts for buildings would enter “best practices” manuals in architecture. Schools would have desks and hallways oriented
in such a way as to promote learning. Hospitals would do the same with staircases, beds, and surgical theaters to promote healing. Feng shui masters would
descend regularly to houses expecting children, ensuring the proper environment. “Energetic” layouts would be on every bachelor’s mind.

The DMV would get a radical overhaul to reduce the stress within its walls.

Along with developing a handful of layouts for use in all architecture, true feng shui would redefine zoning laws for cities. Based on yin and yang polarities, certain districts would be placed in close proximity. Hospitals would be constructed near boxing rings. Gyms would be kiddy
corner to candy stores. Prisons would be opposite police stations.

Personal warfare gets nasty in a world were feng shui theory is true. Angry with Johnson from accounting? Move his stapler two-inches to the left. At home,
artificial emotion becomes dinner talk. Are you and your spouse actually fighting, or is the planter in the corner not properly aligned with the Dark
Turtle trigram? Do you really think he never opens up to you, or did you forget to find the correct astrological constellation to
turn the couch toward?

If feng shui worked, it would be simple enough to verify. Like testing a new mattress to see how it feels, a freelancing feng shui master could demonstrate
his or her services to a homeowner. The master would first blindfold the homeowner, and then proceed to rearrange furniture and knickknacks around the
home. Each variation would produce different emotions and senses of well-being. The blindfolded homeowner would of course be able to tell the difference,
stopping the master when the home felt “just right.”

But despite all the western decorators and stylists who advocate for it and preach its functionality, feng shui has no empirical support. The only real
flavor of feng shui that widely exists today is a western one, without any historical backing and relying on New Age “feelings” rather than an actual
device or astrological constellation. Even in the country of its origin, China, feng shui has been largely discouraged or banned outright as a “feudalistic
superstitious practice” after the People’s Republic of China was founded in 1949.

What could be more absurd than their imagining that the safety of a family, honors, and their entire existence must depend upon such trifles as a door
being opened from one side or another, as rain falling into a courtyard from the right or from the left, a window opened here or there, or one roof being
higher than another?

Yes, what could be more absurd?

Kyle Hill is a science writer who specializes in finding the secret science in your favorite fandom. He writes for the Scientific American Blog Network at his blog, But Not Simpler. Hill also contributes to Slate, Wired, Nature Education, Popular Science, and io9. He manages Nature Education's Student Voices blog, is a contributor to Al Jazeera America’s science show TechKnow, and you can follow him on Twitter under @Sci_Phile.

Other Articles from Reductio ad Absurdum

Billions and Billions of Planets and Stars, Twelve Personalities