Haunted or not, Bonaventure Cemetery can certainly lay claim to being a famous cemetery. In its stateliness, it’s the Père Lachaise Cemetery of the United States; the grand final resting place of Jim Morrison and Oscar Wilde. Bonaventure’s residents aren’t nearly as famous, although Wilde once visited there, praising the place as “incomparable”. The cemetery’s permanent population still includes many celebrated citizens; songwriter Johnny Mercer, novelist Conrad Aiken, numerous town dignitaries, and veterans from the American Revolution and Civil War. 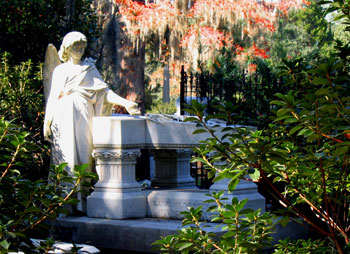 Bonaventure Cemetery is also famous for its beauty. Resting in peace beside the Wilmington River, some claim this view was the inspiration for Mercer’s Moon River. The atmospheric cemetery is a sculpture garden of towering obelisks, elaborate crypts covered in ivy, intricate headstones carved with poetic epitaphs, and strikingly realistic statues.

The cemetery is a tranquil park of pink azaleas and roses, and avenues of Savannah’s ubiquitous live oaks, draped with swaying tentacles of Spanish Moss. The grounds are teeming with birds and butterflies (and mosquitoes and snakes). During his “Thousand Mile Walk” naturalist John Muir visited Bonaventure Cemetery. He wrote passionately about its flora and fauna in his Chapter “Camping Among the Tombs”.

Bonaventure is called a graveyard, a town of the dead, but the few graves are powerless in such a depth of life. The rippling of living waters, the song of birds, the joyous confidence of flowers, the calm, undisturbable grandeur of the oaks, mark this place of graves as one of the Lord’s most favored abodes of life and light1. 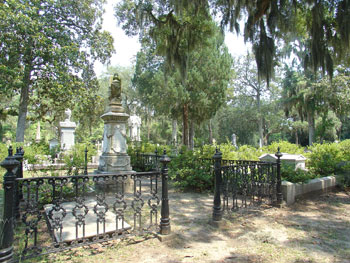 Awaiting a parcel of money, Muir lodged in the cemetery for a week, sleeping upon a grave at night. Unafraid of the local legends, he found the cemetery “an ideal place for a penniless wanderer. There, no superstitious prowling mischief maker dares venture for fear of haunting ghosts, while for me there will be God’s rest and peace.”

But Bonaventure Cemetery is most famous as the “Garden” in the murder mystery Midnight in the Garden of Good and Evil, and Clint Eastwood film of the same name. This non-fiction book with fictional elements recounts some folklore, and creates some too…

The Garden of Fact and Fiction

The cover of the book features a statue of a young girl. Little Wendy, also known as the “Bird Girl”, wears a long dress and a contemplative expression; her head titled to the left as she holds a bowl in each outstretched hand. This ethereal girl is synonymous with the book. The statue was selected as a subject by the photographer Jack Leigh, although she is otherwise irrelevant to the plot. This hasn’t stopped the statue from becoming “haunted” by the ghost of Lorraine Greenman, the little girl who posed for the artist, Sylvia Shaw Judson. Little Wendy once stood sentinel over the Trosdal family plot, but she is so idolized that the owners donated the statue to Savannah’s Telfair Museum of Art to avoid her destruction.

Inside the book, the author asserts that Bonaventure Cemetery stands on the grounds of a former plantation. According to the story, the main house caught fire sometime during the late 1700s. Inconveniently, the blaze occurred during a dinner party; but this was no good cause for a party to end, so they took it outside. “The servants carried the table and chairs after them, and the dinner party continued by the light of the raging fire.”2 The host graciously continues to entertain his guests who raise their glasses to him, the house, and the glowing fire. At the conclusion of the toast, the host dramatically smashes his crystal glass against an oak tree, and the guests follow suit. This event echoes across time…

Tradition has it that if you listen closely on quiet nights you can still hear the laughter and the shattering of crystal glasses. I like to think of this place as the scene of the Eternal Party. What better place, in Savannah, to rest in peace for all time–where the party goes on and on. 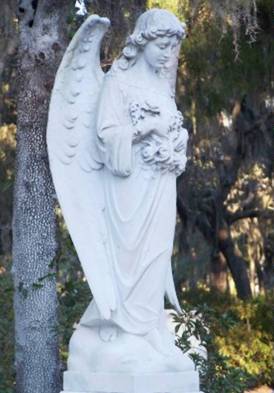 The Bonaventure Historical Society confirms that the cemetery was indeed a former plantation, and that the mansion on the estate caught fire twice; once in 1771, and again in 1800.3 However, there is no evidence that either fire interrupted a party that resumed blithely as the house continued to burn. This is either poetic license, or the retelling of a ripping yarn.

In another section of the book, the narrator and a character known as Minerva the Voodoo Priestess arrive at the cemetery by boat at night. The grounds are closed, the visitors are trespassing, and the narrator expresses concern that there could be guard dogs on the premises. This reference seems to have created the myth that Bonaventure is haunted by ghostly dogs. Second-hand sources report that visitors hear the barking of phantom dogs, that some have actually seen these dogs, or even been chased out of the cemetery by the snarling, snapping animals.4 The simplest explanation is that the phantom dogs are mortal dogs. Below is a reference to the fact that the cemetery lies in a residential zone, and there are neighbors, with pet dogs, who enjoy the grounds as a park.

We live down the street from this cemetery. And we have voted it the best Sunday morning walk in Savannah! Bring the dogs5. 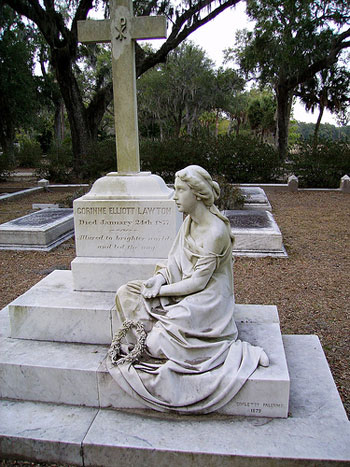 The strangest part of this story is that Minerva the Voodoo Priestess did exist, as Savannah resident Valerie Fennel Aiken Boles. Boles has since died, but she is immortalized in the book, casting spells and hexes, and collecting cemetery dirt for use in her rituals. This has led to the practice of visitors collecting souvenir soil from Bonaventure. Ironically, they are purloining dirt from the wrong cemetery. The biggest misconception is that Bonaventure Cemetery is the actual “Garden of Good and Evil”. In the Chapter of this very name, the characters are in a cemetery in nearby Beaufort,

The Cemetery is inhabited by an abundance of angels and cherubs. According to folklore, some of these haunting images also haunt, such as the angel that reputedly “changes facial expressions”.6 People believe her countenance transforms from showing anguish, to sorrow, to peacefulness. But it depends on the angle of the angel, the perspective, and the interpretation.

Bonaventure is also populated by evocative statues of its inhabitants. Anecdotally, these lifelike monuments come to life; babies cry, children play, and Corinne, a beautiful young woman, smiles because she was “allured to brighter worlds, and led the way”, that is, she committed suicide.

The most infamous “ghost” of Bonaventure Cemetery is Little Gracie. In her perpetual pose, the little girl with chubby cheeks and sharply-cut bangs sits beside a tree trunk, clutching a flower. She wears a high neck frilly collar, a buttoned sailor dress and spat boots. A plaque by her grave shares her poignant story.

Little Gracie Watson was born in 1883, the only child of her parents. Her father was manager of the Pulaski House, one of Savannah’s leading hotels, where the beautiful and charming little girl was a favorite with the guests. Two days before Easter, in April 1889, Gracie died of pneumonia at the age of six. In 1890, when the rising sculptor, John Walz, moved to Savannah, he carved from a photograph this life-sized, delicately detailed marble statue, which for almost a century has captured the interest of all passersby.

Perhaps it is because her statue bears such an uncanny resemblance to her, or because it is tragic that she died at such a tender age, that some like to believe Little Gracie still lives. Visitors leave toys for her ghost to play with, and claim she cries tears of blood if her playthings are removed. There is always a collection of toys near her tomb, especially around Christmas time; but no sign of tear-stains running down the mould that grows over the delicate features of her marble face.

There’s a belief that if you place a quarter in Gracie’s hand and encircle her statue three times, the coin will disappear. With her down-turned marble hands, nothing can be placed on her palms, but her tomb is still a wishing well of coins. The grave is fenced off because visitors would also rub the statue for good luck; being bad luck for the statue. But some claim the statue materializes, the graveyard becomes her playground, and that the wrought-iron fence is designed not to keep people out, but to keep Little Gracie in…

Bonaventure Cemetery has a lively past, but its history is buried by pseudo-history. The locals favor the site as a park for picnics and Sunday walks, but the tourists visit for these legends. However, the folks at the City of Savannah don’t take too kindly to the folklore.

The cemeteries were designed to inter and memorialize the dead and it is inappropriate to sensationalize these sacred sites. Please show respect for the dead and their survivors who frequently visit their grave sites. Visitors are encouraged to appreciate the historical and cultural significance of the sites and the people interred there, the cemetery architecture, the scenery and the natural ecosystems which inhabit the sites.7

It seems that for many people, history means haunted.