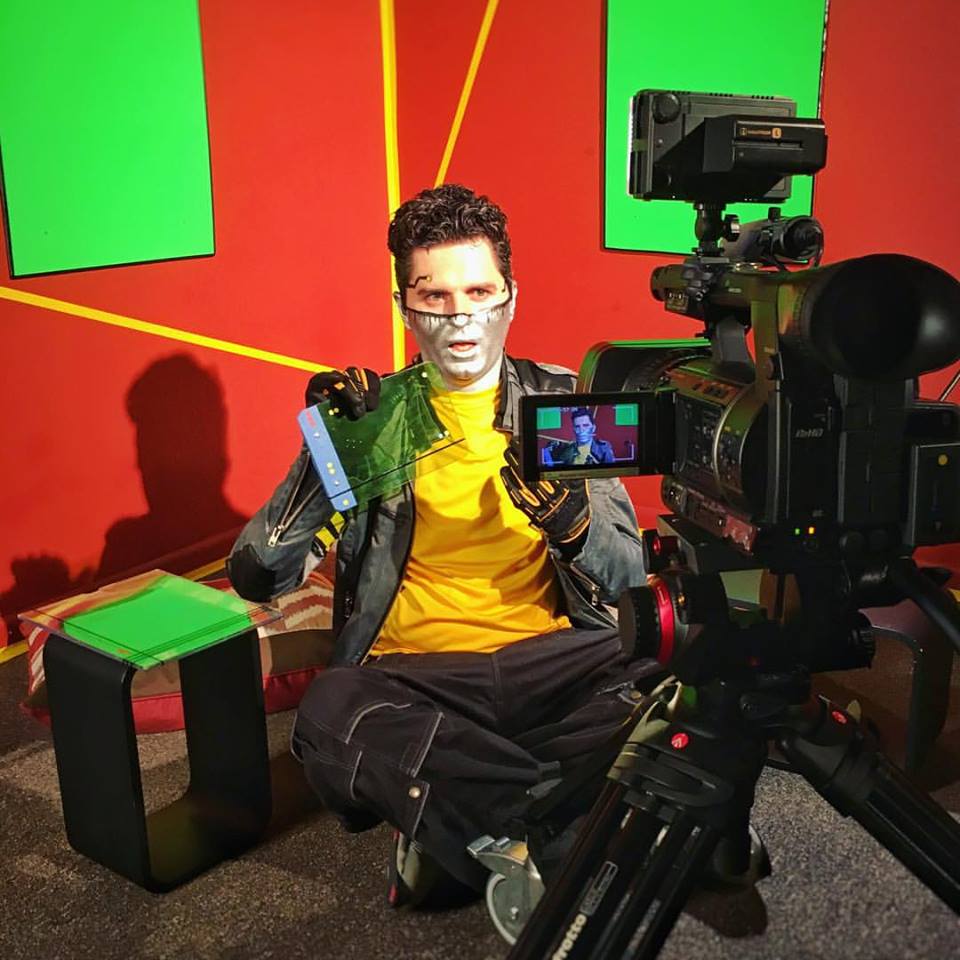 Alan Melikdjanian is the creator and star of the humorous Captain Disillusion web series, a superhero on a fictional children’s show. While the word debunker might seem like a negative word, in this case I can’t think of a better word for what Melikdjanian does. He takes viral videos showing floating cities, UFO’s, shadow people, and more, then produces high-quality videos explaining how the video was faked. In some cases, the viral video is not a hoax but a natural freaky occurrence. Viewers interpret the video as being paranormal, and Melikdjanian explains what visually is really going on.

Captain D’s catch phrase is “Love with your heart: use your brain for everything else.” I think it’s about time the community learned more about the man behind the makeup.

Susan Gerbic: Alan, I first became aware of you in 2008 when someone mentioned that you had attended the JREF Amazing Meeting as yourself, Alan Melikdjanian, and only revealed to a few people that you had this web series that debunked fake viral videos as a superhero that wears a yellow and black tracksuit. I was intrigued, looked up your videos, and realized you have amazing talent. And I loved your character Captain D. The person who mentioned you was surprised that you were keeping quiet about who you were, as even back then you were attracting attention. You don’t come across as shy; were you just checking out our community? Not quite sure you wanted to start getting involved?

Alan Melikdjanian: I was checking out the community, but that’s not the reason I kept to myself. I am in fact painfully shy. My videos may show an obnoxious, quick-witted super(ish) hero, but I’m very different in real life. I feel nervous even talking to you right now, which is crazy because we’re doing this in writing!

Gerbic: From what I have heard, you became aware of organized skepticism through Penn and Teller. What were your first impressions of this community at that time? And have you revised your views?

Melikdjanian: Yes, I liked P&T’s Bullshit series. Analyzing everyday things critically with irreverent humor felt refreshing and made me realize I thought the same way about… well, let’s say most things, without knowing the name for it. They regularly mentioned James Randi on the show. I watched some of his talks on YouTube and thought, “Hmm, cool dude.” Cut to a year or so later: James Randi calls ME on the phone, having seen my YouTube videos, and invites me to visit the JREF. I was led though a series of iron gates and airlocks to a radiation-proof chamber in which Randi, emitting a subtle amber glow as he spoke, showed me a couple of magic tricks and introduced me to the concept of skepticism and the skeptic movement. I wasn’t sure about being part of a community because I am a loner, a rebel. But TAM sounded extremely fun, so I went and it certainly was.

Gerbic: The Guerilla Skepticism on Wikipedia (GSoW) project rewrote your Wikipedia page in 2012. It had twelve citations when we got involved, and now it is up to twenty-three and counting. The main photo is one I took when you came to TAM 9 as Captain Disillusion. Can you give readers an overview of your biography for those people who have yet to read your Wikipedia page?

Melikdjanian: First let me say thank you to GSoW for the great work you do. I’m not sure how I got on Wikipedia, but since I’m there, it’s reassuring to know I’m in good hands.

I was born and grew up in Soviet Union, which from a toddler’s perspective seemed like an ok place except for the relatively muted colors of all my toys. My parents were circus performers. I came to the U.S. in 1993, at the age of twelve and was interested in pursuing a career in animation. But I soon realized animation is an art that can be studied in solitude, through books and tutorials. Filmmaking, however, is a team effort and a special kind of discipline that you have to experience with other people and practice like a sport. So I went to film school and diligently studied every aspect of how to tell effective stories through the multifaceted language of cinema. Now I use that to make strangely elaborate YouTube videos.

Gerbic: Please tell us more about Captain D. Is he your alter ego?

Melikdjanian: Alter ego? He’s ALL ego. Captain Disillusion is a self-proclaimed superhero that appears to be hosting a children’s show from the corner of a barren red room, except there is no audience or cameras. He explains why and how various viral videos were faked, usually involving visual effects trickery. Frankly, the whole thing seems shady and we might want to inquire into this guy’s mental stability. He’s somewhat charming, though, in an awkward way. Eh, he’s probably fine.

And I, for one, don’t think we look anything alike.

Gerbic: YouTube is an amazing medium. You seem to have figured out how to grab a following—the last time I checked you had over 200,000 subscribers. Any advice you would give to someone just starting out?

Melikdjanian: Susan, let me tell you about my 3 Rs of YouTube success: 1) Regularize your posts, 2) Rally your subscribers, 3) Ride the social media wave. If you use my patented system, I GUARANTEE that you will become an instant YouTube success!

No, I’m actually a terrible case study for how to do well on YouTube because I’ve always actively avoided doing all of the above. Yes, I have just over 200k subscribers right now, but I’ve been on YouTube since 2007. And I’ve seen plenty of people join and leave me in the dust in terms of subscriber count within a couple of months. But I think the method by which you achieve popularity sticks with you. If you get a million subscribers because you’re really good at self-promotion and being edgy, then you’ll be known for just that. The only thing I want to be known for how good my videos are, so I focus 100 percent of my attention on making them good.

Gerbic: What do you think your web series brings to the table as far as scientific skepticism?

Melikdjanian: I think my videos are mostly aimed at people who are not aware of or interested in learning about science or skepticism at all. It’s 95 percent entertainment and 5 percent education, on a good month. But I hope some percentage of those viewers get subliminally inspired to check out the work of more substantive skeptics after watching my stuff and go on a journey toward thinking more critically from there. I’m a gateway drug.

Gerbic: I really want to ask you about “The Undebunkable” video that you uploaded July 11, 2016. I love your videos; every time I see a new one I just shake my head and say “that was awesome,” but this one is very different. It’s by far my favorite, and not just because I get a cameo for two seconds. It is a commentary on people taking skepticism too far, turning into cynics or conspiracy theorists. Do I have that right? Why do you think this message is needed now?

Melikdjanian: Thanks! Subscribers often send me suggestions of videos to analyze, which I like. But recently I’ve seen a spike in the number of videos people automatically assume are fake even though there’s no reason to think so. It’s as if the online community has flipped from being overly gullible to being overly suspicious. I’ve probably contributed to that attitude, so I thought this would be interesting to address. It also seemed like a good way to connect to the topic of conspiracy theories. Now, I know we hate framing skepticism as a spectrum from gullible to paranoid. That’s not the technical definition of the term and it’s not on-brand. But for the purposes of this video I treat it as a colloquial term, leaning on the idea that skepticism is only healthy when it relies on evidence. If you merely like hanging out in skeptic circles and talking about stuff in a skeptical-sounding way without an intellectual foundation under it, then you’re just one pet idea away from being a science denier or a conspiracy theorist.

Gerbic: I’m proud to say that I was one of your early supporters on Patreon. I’m just a small fry in the donation department, but apparently with enough of us it really helps. How do you think Patreon has changed how creators create?

Melikdjanian: Patreon is a phenomenal platform. It’s like a perpetual Kickstarter where people can support artists/craftspeople on a continuous basis, and it’s certainly changing my life. Before Patreon, making Captain Disillusion videos had to be relegated to a hobby. Now through your generous support (alongside a few hundred other patrons), I’m able to produce a video every month, and I’m getting very close to reaching my goal of working on the Captain D web series full time. All I can say is thank you!

Gerbic: What are your future plans?

Melikdjanian: Outside of YouTube, I’ve worked as a video editor, director, and visual effects artist for many years, so I would like to “level-up” in that arena and become a more established film and television director. I’m just waiting for Michael Bay to get accidentally crushed by a Transformer so that a spot opens up in the Director’s Guild. I think that’s how it works.… I’m not sure.

Gerbic: What area do you think someone new to participation in our community should focus on? Any great advice?

Melikdjanian: I think it’s best to focus on what you know—something you’re already an expert on outside of skepticism—and explore the ways in which it’s connected to skepticism. With Captain Disillusion I connected a random thing—visual effects—to skepticism in a way that people seem to find engaging. I’m sure that can be done with many other fields in different ways.