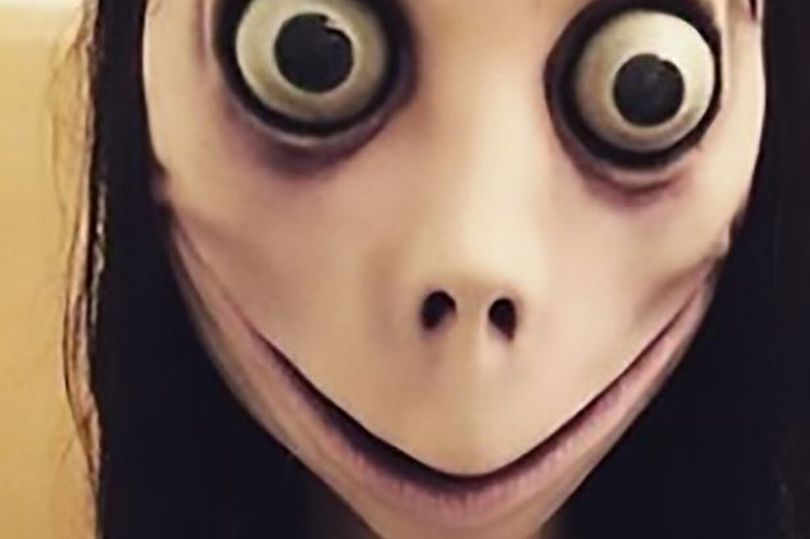 Kids and their parents around the world apparently have a new deadly online danger to fear: a mysterious and terrifying online figure known as “Momo,” whose creepy image is that of a bug-eyed, reptilian-visaged woman in the Japanese horror tradition. The targeted teens are sent violent or gruesome images by Momo through an app or social media and encouraged to reply. They are threatened if they don’t and forced agree to conduct a series of violent and bizarre tasks—resulting in death. It’s called the Momo Challenge.

News about the challenge first spread in July 2018, when a 12-year-old Argentinian girl was rumoured to have died by suicide because of threatening messages. … The British press has now reignited panic around the internet game after a mother from Bolton posted a comment in a local Facebook group, warning other parents that her seven-year-old son had been looking at Momo online and ‘made three kids cry’ by telling them about the creature.

The Momo Challenge is a repackaged version of an older, nearly identical and largely debunked suicide game called the Blue Whale Game. In 2017 scary warnings circulated on social media asking parents, teachers, and police to beware of a hidden threat to children: a sinister online “game” that can lead to death. A typical message warned:

The Blue Whale “suicide game” is believed to be a hidden online social media group which its main aim is to encourage our children to kill themselves. Within the group daily task are assigned to members have to do different tasks for 50 days. They include self-harming, watching horror movies and waking up at unusual hours, but these gradually get more extreme. But on the 50th day, the controlling manipulators behind the game reportedly instruct the youngsters to commit suicide. Please share and warn all other parents of the dangers of this game.

Urban, or contemporary, legends are marked by plausibility; they are told as true and often are said to have really happened … to a friend of a friend, of course. Often kids tell the stories to other kids to scare them in an updated cyber version of terrifying campfire tales. Expanding on the mention of a Momo-mortified mom, one news article breathlessly noted:

It was revealed on Thursday, February 21 that a seven-year-old boy from Manchester was a victim of the game. His mum was deeply concerned to find out he had made several of his peers cry by telling them Momo was going to come into their room at night and kill them. She is urging parents to be aware of the shocking whatsapp challenge—and its dangers. A mum from Belfast also found the creepy game on her seven-year-old daughter’s ipad this week.

Part of the reason this story has credibility for many parents and school officials is that there is a grain of truth to it—though not to the rumors of online suicide games specifically. Cyberbullying and sexting extortion are genuine online dangers that teens face; there are thousands of documented cases where both teens and adults have been forced to do things for strangers, including sending both money and nude photos. For concerned parents it’s not much of a logical leap to online suicide games targeting teens and run by a cabal of conspirators.

Police, teachers, and others have issued statements to address rumors but often end up legitimizing the stories and making them more credible. People take a “better safe than sorry” approach to sharing these stories, and it ends up doing more harm than good if there is no underlying threat, as is the case here. It’s also common for journalists and others—even when a threat is recognized as bogus—to spin the panic into a “teachable moment” in which to remind kids about the dangers of peer influence and the perils of online predators, bullying, and so on.

I previously researched the first two deaths claimed to have been associated with the Blue Whale Game, that of a female teen in Atlanta, Georgia, in May 2017 and a male teen in San Antonio, Texas, two months later. If the specifics of these games are true, determining whether or not a given person was a victim of it or not should be easily enough established by a competent, trained investigator. Either their digital footprint includes instructions from some unknown person directing them to complete fifty daily challenges, or it does not; either they were doing increasingly bizarre and harmful tasks on each of the forty-nine days leading up to their deaths or they weren’t, and so on. As for the death of the Argentine girl driven to suicide by Momo mentioned above, police have not confirmed any link to her death, much less the existence of the Momo Challenge. Rumor and speculation, not confirmed fact, are the coins of the cyber realm.

The Momo Challenge and the Blue Whale Game are part of a folkloric tradition of what’s called a fear test, in which teens and legend trippers conduct a ritual to summon a menacing figure or test their bravery, for example standing in front of a mirror and reciting “Bloody Mary” a dozen times or visiting a location where spirits are said to dwell, such as an abandoned house or train trestle. Will teens be brave—or scared—enough to complete the challenge, even if they know it will end in their deaths?

There is little evidence that these games have actually caused suicides—or that they even exist. Moral panics such as these are part of a very old tradition. These scary media stories are very popular because they are fueled by parents’ fears and wanting to know what their kids are up to. Indeed, the Blue Whale Game and the Momo Challenge have all the hallmarks of a classic moral panic. Familiar elements and themes include:modern technology and seemingly benign personal devices as posing hidden dangers to children and teens; in classic “Stranger Danger” fashion, the threat is some influential evil stranger who manipulates the innocent; andthere is an element of conspiracy theory to these stories: it’s always a “hidden world” of anonymous evil people who apparently have nothing better to do than ask teens to do things for fifty days before (somehow) compelling them to commit suicide.

Especially when dealing with extraordinary claims of conspiracies and online death cults, it’s easy for grief and moral panic to override critical thinking. The evidence for the Blue Whale game and the Momo Challenge is built largely on rumor and conjecture instead of solid evidence. This is only the latest in a long series of similar moral panics and outrages shared on social media and aided by sensationalist news media. Often the best antidote to these rumors is a healthy dose of critical thinking, media literacy, and skepticism.