Of late, many skeptics have been searching their souls, or searching the place where their souls would be, about the direction of the movement. What is it that skeptics should be skeptical about? Or, as I put it in the first installment of this article, what subjects belong in the skeptical canon, and why?

Some are vocally frustrated with the canonical status of paranormal pseudoscience. They don’t see the value in proving that Bigfoot still doesn’t exist. Others worry about expanding the movement’s mandate beyond its areas of special expertise, or turning skepticism into one liberal or libertarian political pressure group among many. The question is how to accomplish important things without attempting things that others do better.

The Division of Labor Principle

I begin with the premise that the primary mission of organized skepticism is not simply to gather up self-identifying skeptics into a flock of like-minded individuals in which they will feel at home. Nor is it simply to witness to those outside the flock in hopes of persuading them to embrace the worldview of critical rationalism and scientific naturalism. If flocking is necessary, and witnessing is sometimes appropriate, it is because they help organized skepticism to carry out some other more foundational activity.

That activity is service. As Daniel Loxton has put it, organized skepticism provides an essential service to the public. At its best, it protects people from deception and misinformation, it empowers people to improve their health and well-being, and it contributes to public discourse on matters of public policy and the rights of citizens. The question is, how can we be of most service?

Prudence recommends an intellectual division of labor. Skeptics should not attempt to duplicate the efforts of those who are in a better position to be of service. For example, The Innocence Project is exposing faulty forensic science and eyewitness testimony in the wrongful convictions of hundreds of people in the United States who have thus far been exonerated by DNA evidence. As much as I think this is noble work, I think skeptics would be mistaken to go there, even though they would find bad thinking to discredit with evidence. Bad thinking is happening all over the place. Since in this instance there is already a specialized scientific field of forensics, experts in this field (as well as criminal law) are better placed than skeptics to be of service.

The successes of organized skepticism on its canonical topics can be attributed to a unique expertise on these topics. These are areas that attract, in Daniel’s phrase, “enthusiasts but no legitimate experts.” Here the phenomena are believed to lie beyond the reach of normal science, either because they fall in between the traditional disciplinary boundaries (e.g., astrology) or beyond the ken of empirical methods altogether (e.g., miracles). Skeptics are the experts at formulating and evidentially supporting naturalistic explanations of phenomena believed to lie beyond the reach normal science. They labor in the disputed borderlands of science.

Among the phenomena in the borderlands, skeptics should concentrate on those that do the most harm. This will often mean looking beyond national and cultural borders.

A study published by UNICEF in April 2010, Children Accused of Witchcraft: An Anthropological Study of Contemporary Practices in Africa, finds that “in a large majority of African countries, executions of alleged witches have reached alarming levels,” specifically,

Botswana, Cameroon, Ghana, Namibia, Nigeria and the United Republic of Tanzania. . . . In Limpopo Province in South Africa, according to unofficial estimates, 389 people were allegedly killed between 1985 and 1995; and between 1996 and 2001 more than 600 people were killed by lynching in the same province. Thousands of elderly people, especially women, have been accused of witchcraft and then beaten and/or killed in Tanzania.

Large numbers of children are being made the victims of witchcraft allegations in the Congo Basin, Sierra Leone, Liberia, and Nigeria. Particularly vulnerable are children who are different: orphans; those with albinism; those whose birth was considered abnormal—for example, premature or in a breech position; those with a physical disability or illness such as Down Syndrome, autism, or stuttering; even those who are simply exceptionally thoughtful, willful, or withdrawn.

Leo Igwe is a campaigner against witchcraft allegations in Akwa Ibom State in southeastern Nigeria. He has been harassed, jailed, and beaten for his activities in defense of children’s rights. As Leo points out, institutions like UNICEF will only go so far in investigating this scourge.

The document carefully avoided doing a critical evaluation of claims or accusations associated with witchcraft. The study did not come out with a position statement as to whether witches exist or not or whether claims associated with witchcraft are true or false. This report did not do justice to the topic and phenomenon of witchcraft accusation because it did not provide answers to questions that have been boggling the minds of Africans for ages, such as: Is witchcraft science or superstition? Is witchcraft myth or reality? Do witches actually exist or are they imaginary entities? 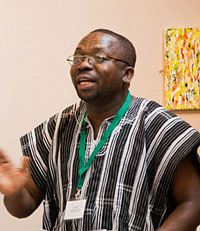 In Leo’s experience, the common belief among the “so called African elite” is that “the veracity or validity of witchcraft claims is beyond the scope of ‘Western’ science but within the ambit of ‘African science.’” Here is an urgent human rights problem in the heart of skeptics’ traditional territory.

Could skeptic activists in North America be of service? When I asked this of Leo Igwe, he responded with a resounding yes. They can be very useful allies, he said, most immediately by offering “training and transfer of expertise,” fostering international networks, and helping to fund local campaigns “because the threats of dogma, fraudulent, paranormal and fringe science claims are global. So combating them requires a global approach.”

A successful model of skeptical impact can already be found in the southern Indian context, where campaigns on witchcraft and sorcery, or banamati, are led by rationalists. Interdisciplinary teams of doctors, psychiatrists, social workers, social scientists, hypnotists, and magicians visit affected villages. They interview the accused and their alleged “victims,” educate the community, and help to train local police on effective enforcement and prevention.

Sadly, the need for such work is abundant. Fortunately, abundant too are local rationalist activists who are seeking allies. Organized skeptics in North America would do well to draw on the tradition of SKEPTICAL INQUIRER magazine and the Center for Inquiry, which have always been global in scope. By looking beyond their borders, they can engage with new partners and discover new ways in which their unique expertise can be put to the most good.

Austin Dacey, Ph.D., is former director of Science and the Public, a program of the Center for Inquiry and State University of New York at Buffalo, and author of several articles and books, including The Secular Conscience. He holds a doctorate in applied ethics and social philosophy and has taught most recently at Polytechnic Institute of New York University.

Other Articles from Circumnavigations

Unification of Forces: The Muslim, the Atheist, and the Higgs