Well it is here: Thomas John Flanagan’s newest bit of fame. His new show, The Thomas John Experience, will air on CBS All Access on Thursday, June 4, 2020. If you have been following the story of Thomas John through my writings, you will know that he has been exposed so many times that he should be radioactive by now. Yet somehow he keeps turning up like a bad penny. Why? Probably because this is what TV executives think that the public wants: reality TV that is anything but reality. The easiest way to explain it is that this crap sells.

So, what are we looking at here? Maybe you read the NY Times article about how Mark Edward and I attended one of his shows and Thomas John read our fake Facebook pages about our nonexistent dead family members in what was called Operation Pizza Roll. Or maybe you read about the Las Vegas Society of Skeptics (LVSoS) attending multiple Thomas John Vegas shows and reporting back on the obvious shenanigans. Or maybe you read one of the many other articles I have written about my research into John’s methods. All clearly tell the same story: If Thomas John is communicating with the dearly departed, then they must be reading social media and reporting back to him.

The fluff pieces that are written about John by the media are frighteningly void of research. The reporters simply take Thomas John at his word; there are no challenges, no follow-ups, and no skepticism at all. The latest such travesty I ran across is from reporter Lauren Sarner of the New York Post.  I know the New York Post is not holding out for a Pulitzer and investigative journalism is not their MO. But you would think that maybe, just maybe, someone claiming to be a reporter would spend, what, maybe ten minutes looking on Google to see if there might be more to this story? A quick internet search will lead you directly to his Wikipedia page, one that has it all laid out for the media to find. The many citations, including the New York Times exposé, are at the bottom of the article in case one might want to spend a bit more time researching. Not doing even this bit of due diligence is just lazy.

Maybe Sarner thought of her article as a fluff piece requested by her boss with an hour deadline. Maybe Sarner thinks that there is no harm in promoting those who claim to speak to the dead. Maybe she believes. Or maybe she thinks that no one takes this psychic stuff seriously. I do not know what her motivation was other than to give free positive press to Thomas John. If you don’t think there is money in the psychic trade, researcher Rob Palmer has news for you. Billions are spent on readings each year. Beyond even that, con artists take advantage of believers who come to them in desperation. People in this situation get taken for everything they are worth, losing thousands, tens of thousands, or even millions of dollars to psychic cons. So, yes, people take this “psychic stuff” very seriously; just read the comments on any psychic’s social media platform. The desperation is heart-wrenching.

Sarner admits that Thomas John has “naysayers” and mentions the John Oliver clip that says that people like Thomas John “use information gleaned online to dupe people,” which the skeptic community calls hot reading. Well I am Thomas John’s chief naysayer, and I did not get an email from Sarner. I checked; I even looked in my spam folder. She did allow Thomas John to respond to this criticism, and he gave a weak story about how one day he gave a reading to a man who did not believe in mediumship but now is a total believer. Oh boy, I am convinced now.

Thomas John’s latest is an appeal to authority argument that he was endorsed by a real live “PhD-level psychologist who studies afterlife communication.” People in the science community have long known of Gary Schwartz, PhD, of Yale, Harvard, and now the University of Arizona. When I was first starting out in the world of scientific skepticism, I took a course on examining scientific papers, and a paper by Schwartz was the first one we examined. Ray Hyman, PhD, explained that the Schwartz paper was one of the most poorly designed scientific papers ever written. Hyman and others who have PhDs, such as Richard Wiseman, as well as those who have MDs, such as Harriett Hall, have written extensively about the quality of Schwartz’s research. Hyman, in great detail, has written about Schwartz’s Afterlife Experiments. Hyman wrote that “The outcome, by any accepted statistical and methodological standard, failed to support the hypothesis of the survival of consciousness.” In other words, bragging that you are endorsed by Gary Schwartz is not something to gloat about; in fact, it is quite the opposite.

Let us backtrack a moment and talk about The Thomas John Experience itself. After watching the show’s trailer, I am struck that this is simply Seatbelt Psychic again except that this time he sometimes gets out of the car and gives readings to people on park benches. What was old is new again. I have written about Seatbelt Psychic before, so I will wait to watch the show and see if there is any real difference. Already the promo shows that when more than one person is in the backseat, they do not do what is normal and sit with an empty middle seat; they instead scrunch up together. Why? Because this is how they were instructed to sit. It’s better for the camera to be able to get them both in one shot. And how many cameras are pointed at these sitters? Multiple. Yet they never react to the fact that they just entered a car with multiple cameras pointed at them. Why? Because they know they are being filmed beforehand and are following directions.

We know the old Gerbic adage by now, don’t we? If the psychic knows who you are before the reading, then the chances that you have been hot read are extremely high. And of course, they know who these people are. The sitters have to sign paperwork before getting in that car and before the camera starts rolling. Thomas John can claim he has never met these people before the moment he starts talking to their dead family members, and he might not be lying. But that does not mean that someone else didn’t do some pre-show work on these people and give the best bits of information to Thomas John, which he could then claim he was receiving from the dead.

I might not be a PhD or a psychic, but I had an inkling that Thomas John was about to get a new TV show. My team and I have been following Thomas John around on social media for a very long time. Oddly, he interacts with our accounts and never seems to pick up on the fact that we are not actually his adoring fans. But I digress. 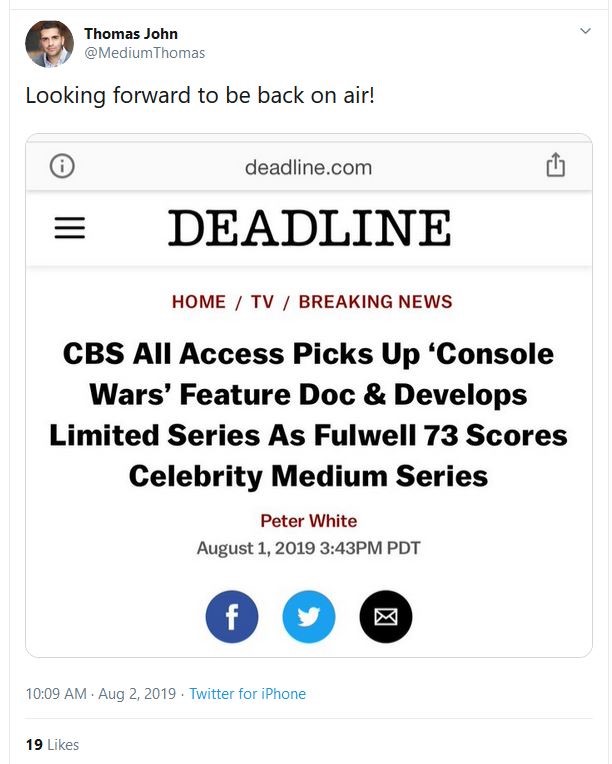 Back in 2019, we noticed that Thomas John started posting these shout outs for people to nominate someone for a reading for a TV show. They were going to get surprised with a reading, and they needed to “be people with big personalities who have suffered a loss AND are big fans of Thomas John.”

Here are two screenshots, one begging for people in the Los Angeles area and one from the Boston area. 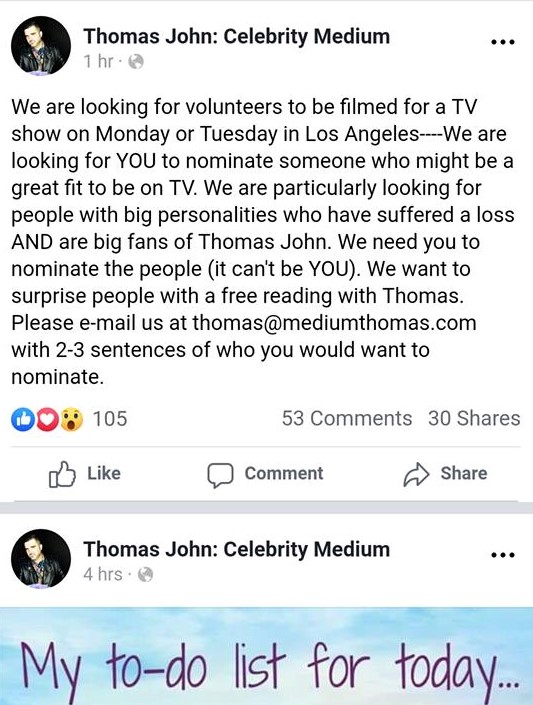 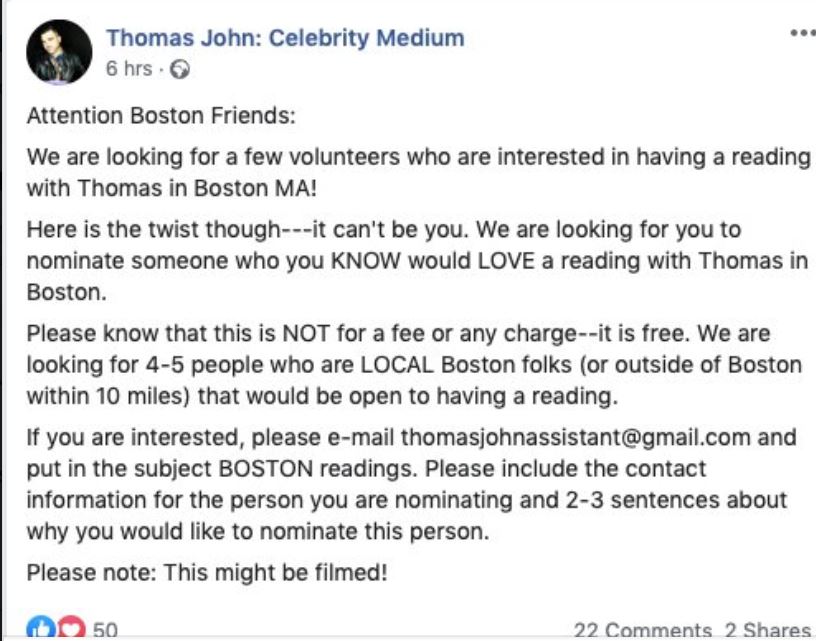 Very interesting, right? Let us just check where they filmed The Thomas John Experience. Hey, look! They filmed in LA, New Orleans, Chicago, and Boston. I wonder how hard it was for the show to find willing personalities to be sitters. Wait, I think you know. According to the CBS website, “World-renowned psychic medium Thomas John journeys across America using his ability to connect unsuspecting everyday people with those on the other side. Whether he’s behind the wheel of a rideshare in Chicago or grabbing a bite to eat in Los Angeles, Thomas’ powerful readings offer insight and closure, resulting in emotional and heartwarming reunions between the living and the dead” (emphases is mine).

The show should be jaw-dropping, and I can’t wait. I am going to make some bold predictions.

I’m getting out my bucket of popcorn and plan on hunkering down to watch Thomas John do his thing. I hope you enjoy my predictions about the show. We will know soon if I was correct.

One last thing before I get the Jiffy Pop out. My Facebook friend Dale pointed out that there was something pretty odd about the CBS YouTube trailer. It was released May 28, 2020, and as of June 3, 2020, it had 3,478,341 views. That is a lot of views in a very short time. But there are only 544 likes and thirty-eight dislikes. That seems really strange. Dale explained that CBS might have hired a company to have bots inflate the number of views but forgot to do something about the likes. It is above my paygrade to investigate this, so I’m just going to leave that up to you all to think about.

Thanks to Rob Palmer for fussing with this article and to the entire Operation Grief Vampire team for all that they do.