As I tugged my suitcase across the foyer of the Melbourne Convention and Exhibition Centre, I remembered the last time I visited the venue, about three years ago. The touring Mind Body Spirit Festival—gleefully dubbed the Mind Body Wallet Festival on The Skeptic Zone podcast—is held annually in one of their large exhibition halls.

Back then I was so nervous of the sellers and psychics touting their goods, I spent the entire time pretending to text furiously on my mobile phone. By the time I was approached by a glossy-as-a-pamphlet promoter touting the pseudoscientific claims of the “cure for autism” Dore company, I was so hyped-up by the tension of being discovered as a skeptically minded tourist that I fled to the Amnesty International stand and begged them to show me the exit.

This time, however, the venue was dominated by the Global Atheist Convention. It’s for rationalists, atheists, secularists, humanists … and maybe skeptics? I wasn’t quite so sure of that last one. I’m slightly more sure now that it’s finished, but I’m still (pardon the horrid pun) skeptical about whether skeptic groups have potentially as much impact on public perception of rationalism and the promotion of critical thinking.

This convention was to feature Australian and international presenters, with a program featuring a range of professionals—philosophers, scientists, online commentators, comedians and media representatives. Advertising for the event included the statement “the bigger we can make this convention, the stronger the signal it will send to Australia’s religious and political institutions that atheism and secularism are forces to be reckoned with.” I think the overall response from critics prior and during the event was a fervent hope that it wouldn’t be so—which hardly discouraged the attitude of presenters and attendees. 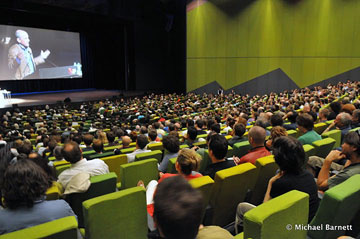 As I had some research data thanks to the Australian Skeptics funding questions on the Queensland Social Service survey, I thought this would be an excellent opportunity to briefly outline some findings. My talk would focus specifically on female beliefs and future directions on the study of paranormal belief. This was data that Dr. Martin Bridgstock and I previously presented at Dragon*Con in Atlanta in 2009 and hoped to talk about in more detail at a future Australian Skeptics convention. There was a panel devoted to women and atheism (and after all, a lot of discussion online about “Where are the female atheists?”), so it seemed to be a useful contribution.

But I was still somewhat skeptical—in a different sense. Would I be the only person presenting a research paper? The only person talking directly about the appeal of pseudoscience and superstitious beliefs and how we could all fall for paranormal claims? Did attendees even view skepticism the same way I did?

By the time the final program was advertised, I thought I was in excellent company. Professor Richard Dawkins, science communicator Robyn Williams, blogger PZ Myers and social commentator Phillip Adams are all on the record as skeptically minded people.

Phillip Adams started off the conference with a distinct message about skeptical activism and his views on its success. His talk “The Atheist Delusion” is replicated on ABC’s The Drum Web site:

Twenty years ago Dick Smith and I aided and abetted the creation of the Australian Skeptics, the local branch of CSICOP – the Committee for the Scientific Investigation of Claims of the Paranormal. CSICOP deals with displaced religiosity. Much of the loss of the market share for big brand religious beliefs was split up between the Pentecostalists with their shopping mall religions or the fast faith franchises, largely generated in California, right alongside the dream factory of Hollywood. Two worlds that overlap to an extraordinary extent. 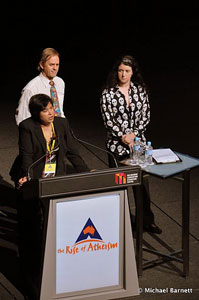 Far from winning, the Skeptics and CSICOP have lost ground to Millenarian and Shirley Macleanish madness. Turn on cable or free to air telly and you’ll see an ever increasing number of programs based on paranormal detectives while John Edward and his fellow frauds talk to the dead. And the amount of space in newspapers given to astrology has by no means decreased. We live in a parallel universe to these people. The beliefs and behaviours that came from the Baptismal font in mainstream faiths have simply deformed and reformed.

Despite this sobering summation of the “lost ground of skeptics,” the dominant theme of his and others’ presentations was primarily atheism, human rights, injustice, and activism. While science and rationalism do overlap with skeptical thought, as Adams indicated, they are not one and the same.

I overheard a presenter voice distrust of all things pharmaceutical when attached to big business, displaying no knowledge of vaccination rates falling to dangerously low levels in many parts of the country. A persistent questioner from the audience insisted that “psychology wasn’t a science” when he took to the microphone, and more than once I heard women discuss that there was room for “feminine intuition” in a godless world.

During my presentation, I made a reference to the sales booths for another conference hosted in the building on muscle building and weight loss. Only that morning I had shared an elevator with a salesperson outlining his marketing strategy to a colleague: “Hook them in with powders and then move them onto pills.” How different was this from vitamin supplements and fish oils? 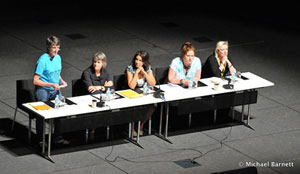 After the conference I was challenged by Bangladeshi presenter Taslima Nasrin as to why Deepak Chopra’s books were on sale at the bookstand in the foyer. Spirituality of the New Age kind is not entirely unheard of in research done on modern day atheists, after all. I took notes and kept track of topics I could later discuss in detail on the Token Skeptic podcast.

The few times I had a chance to talk to people around the convention, they interpreted my questions about skepticism to mean “Are you skeptical of religious beliefs and their value to the world?” Although the media reports of the convention painted the presenters as broadly condemning or virulently attacking religion, more often than not I heard wry jokes, exasperation, and angst at how freedom of speech, expression, and the curtailing of human rights was not helped or just directly hindered by religious organisations. Bioethicist Leslie Cannold on the women’s panel even argued that atheists should define their mission as the defense and promotion of secularism in order to be inclusive of religious believers with secular beliefs.

Having met AC Grayling during his tour of Australia, I was interested in the part of his presentation that criticized people who are funded by the Templeton Prize. The Templeton Foundation presents money to scholars who can demonstrate “a substantial record of achievement that highlights or exemplifies one of the various ways in which human beings express their yearning for spiritual progress.” I later recalled where I had first heard of the Templeton Foundation—the Skeptics Society annual conference at Caltech in 2008. Dr. Michael Shermer wrote at length on the level of their involvement and how they helped out with the travel expenses for the afternoon colloquium speakers on the Big Question topic. It was certainly not an encouraging message for future skeptical-group involvement after Grayling’s summation. 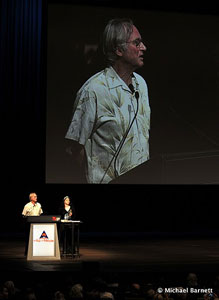 So what room was there for skeptics in this crowd? I’d say that there was a significant overlap amongst the population that I knew, mostly from the unofficial online communities. The Young Australian Skeptics, who run the podcast The Pseudo-Scientists, were involved in a variety of activities, for example. I spotted them wearing volunteer GAC shirts when directing the crowds, and team-member Jason Ball launched the Freethought University Alliance with the help of science blogger PZ Myers. Fans of their podcast and keen readers of science blogs met up at the coffee stand, and I spotted more than a handful of Tim Minchin tour shirts in the audience. I even heard Minchin’s songs along with George Hrab and They Might Be Giants tunes being played during the intermissions and to introduce speakers. The youth element greatly enhanced the reporting of the convention on Twitter (using the #AtheistCon tag). Detailed blog entries rival the mainstream media with demonstrably more accurate accounts of the event.

I don’t think that skeptics should rest on their laurels, as Phillip Adams concluded at the start of the convention. Despite some differences in our views, skeptical communities cannot ignore the power of this kind of convention to capture and sustain the media’s attention. The news articles and opinion columns on the Global Atheist Convention Web site are still being collated and numbers well over a dozen. Since I know that there were a significant number of skeptics in the audience who enjoyed the gathering, I hope that the overwhelming success of this weekend will better inform future events with a distinctly skeptically minded bent.