Ty Bollinger’s documentary series “The Truth About Cancer” demonizes conventional oncology and promotes alternative cancer treatments. I recently wrote an article for Science-Based Medicine pointing out how very untruthful it is. I showed that it used unreliable sources and was full of lies, distortions, omissions, false claims, myths, fallacies, and frankly dangerous misinformation. 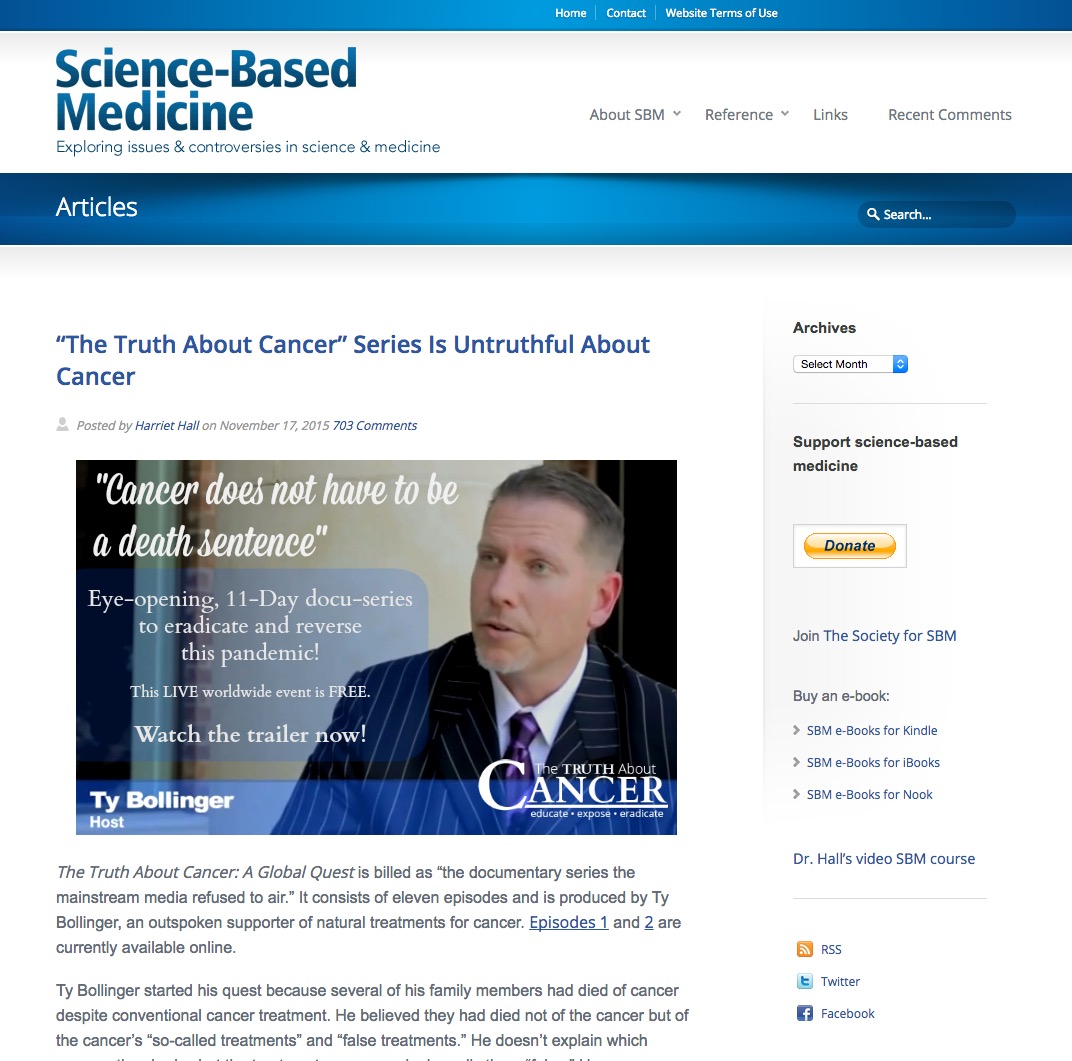 The “Truth About Cancer” series has been not only well received but hyped by critics of conventional medicine and advocates of alternative medicine. Some of them were angry about what I wrote. Instead of commenting in the comments section of the SBM blog, some of the angriest people prefer to attack me via email where others can’t see and debunk their criticisms. Some of the emails I get are doozies. I’ll quote this prize example in its entirely for your delectation. I won’t identify the writer; I want to spare him the embarrassment.

You are a joke of an MD. The military must have done a real job on you mentally after the article i read about the natural cures documentary series. This is all true

get off your prescription drugs and wake up.

If there were any errors in what I wrote, he could have politely pointed them out and provided evidence, preferably in the form of citations of scientific studies. Instead, he cut and pasted a bullet list from my article. I had listed these false claims from the documentaries after explaining that they were claims that could easily be refuted by a little research or even common sense. He said these claims were all true, but he didn’t provide a shred of evidence that any of them were true. Can he possibly imagine that his simply saying they are true would be enough to outweigh everything else I know? Sure, I’m going to throw science, evidence, and common sense out the window and just believe some stranger who writes an email! He didn’t address any of the rest of my article and didn’t provide any evidence in support of anything in the documentaries. Then he proceeded to insult me and call me names.

Is there any evidence that would prove those claims true? I don’t think so. A moment’s reflection is enough to refute most of them. The others are easily refuted by a little Googling.

I actually find it flattering when someone attacks me so stupidly. It means what I wrote was so accurate that they were unable to find anything they could legitimately criticize. Personal insults are the last resort of the intellectually bankrupt.

Why do people believe claims like these? Ignorance, gullibility, lack of science education, susceptibility to testimonials, and peer pressure might explain belief in some of these claims. But some of these claims are so obviously false that it takes willful obtuseness and disregard of reality to believe them. Perhaps they have emulated the White Queen in Lewis Carroll’s Through the Looking Glass and have practiced believing six impossible things before breakfast.

The sad thing is that people who believe the misinformation in Bollinger’s “Truth About Cancer” series will be persuaded to forgo lifesaving cancer treatment in favor of false hopes. The alternative practitioners he interviews are taking advantage of suffering patients at their most vulnerable, when they are ready to believe anyone who promises a cure, no matter how nonsensical the treatment. This is a serious concern: people will die. Bollinger and his cohorts will have blood on their hands.