This past week during oft-contentious Senate confirmation hearings for Supreme Court nominee Brett Kavanaugh, things took a turn from the political to the surreal with conspiracy rumors that a lawyer sitting behind Kavanaugh was caught on camera flashing a white nationalism sign with the fingers of one hand as her arms crossed. Memes shared on social media “revealed the truth” about what she was doing; some took it seriously, some as a joke, while others smelled Grade-A trolling. 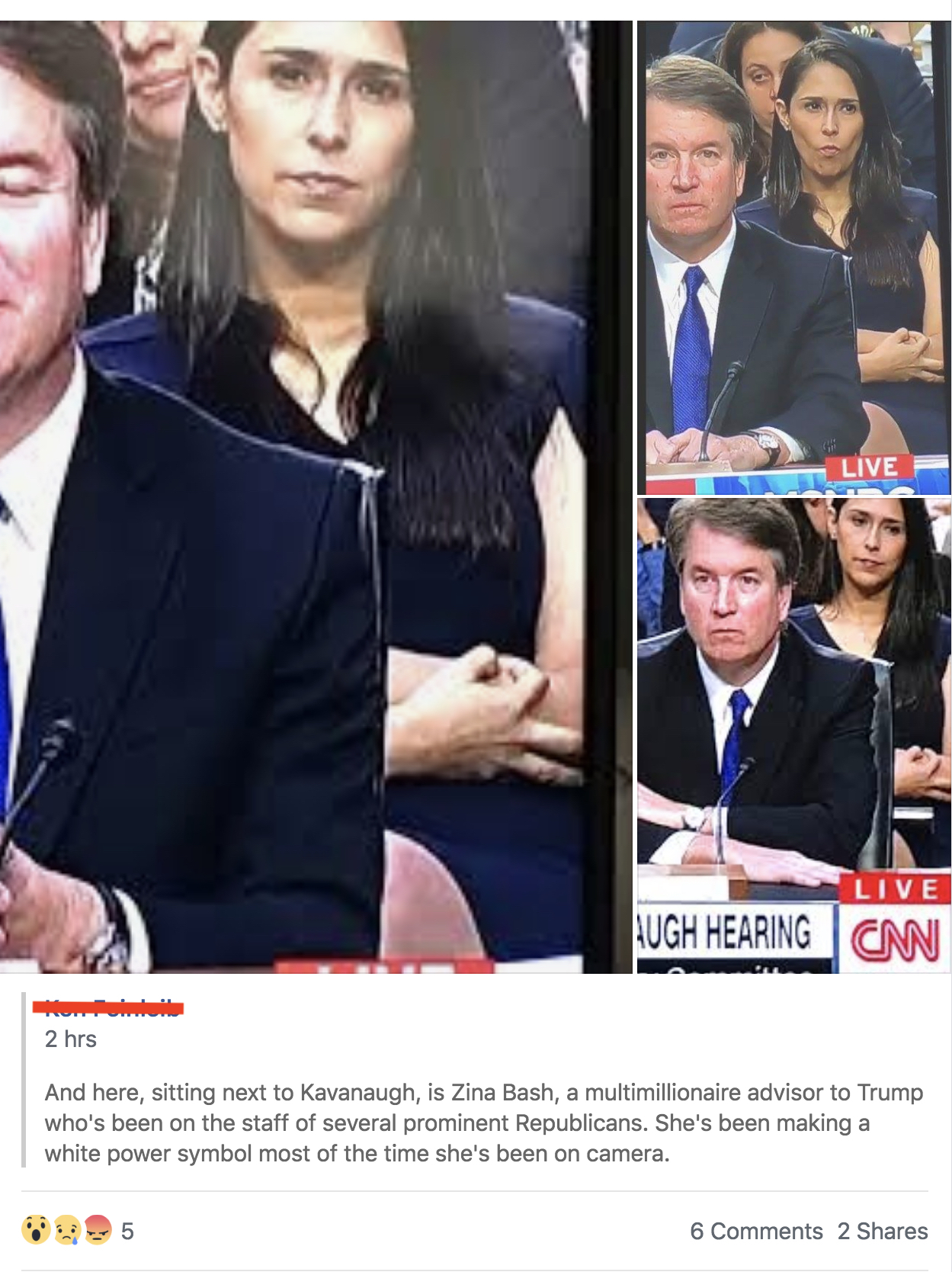 The lawyer, Zina Bash, once served as a clerk for Brett Kavanaugh, who is Trump’s second U.S. Supreme Court nominee. She sat directly behind Kavanaugh to his left, where she was widely seen on camera resting her right hand on her left arm, thumb and pointer finger forming a circle. Bash’s husband, U.S. attorney John Bash, took to Twitter to blast his wife’s accusers, pointing out that she is of Jewish and Mexican descent, and saying the couple has “nothing to do with hate groups, which aim to terrorize and demean other people—never have and never would.”

This is also not the first time that such rumors have surfaced:

Claims that members of U.S. President Donald Trump’s administration have flashed “white power” symbols are not new. In February 2017, controversy erupted when a Reuters photographer captured Trump adviser Stephen Miller appearing to make the gesture. Similar claims were made again in January 2018 when White House intern Jack Breuer was seen making the gesture during a group photograph. In Miller’s case, the absence of video footage made it unclear whether he was flashing the gesture purposely or merely accidentally did so while flaring his fingers to adjust his suit. In the latter case, Breuer said he was mimicking a gesticulation President Trump often makes during speeches and denied he was making a white power sign.

The Anti-Defamation League posted a page explaining the rumor:

[It began as a] 2017 hoax campaign started by members of the notorious troll website 4chan that has since taken on a life of its own….The “OK” hoax was actually just one in a series of hoaxes in which 4channers (and members of other, similar places on the Internet such as 8chan and Reddit) have tried to take innocuous items, symbols or gestures and falsely attribute white supremacist meanings to them in order to fool liberals and get them to spread such false messages.

Other hand signs have been attributed to politicians and entertainers, including Obama, Hillary Clinton, and Jay-Z as endorsing Satanism instead of, for example, love. 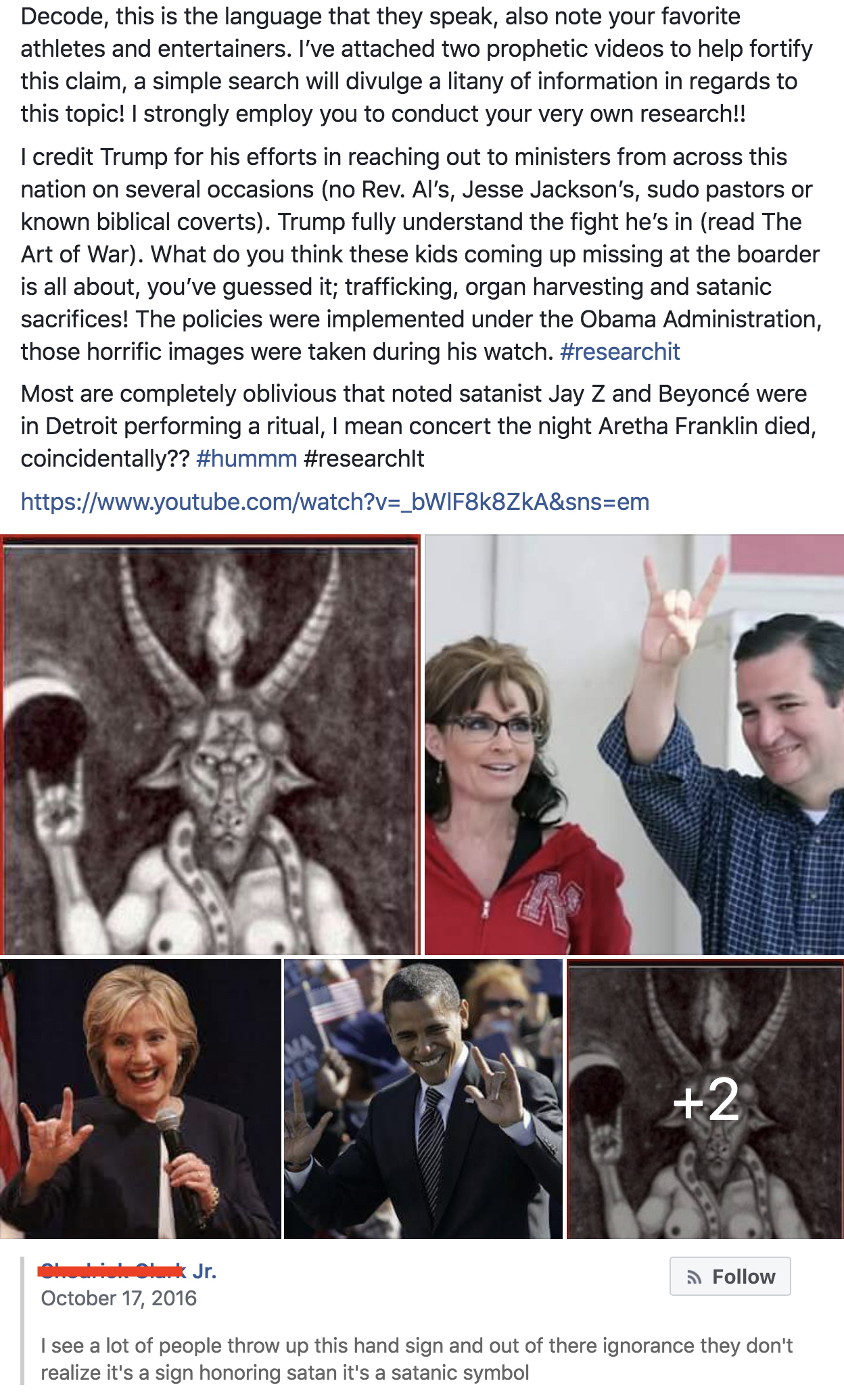 Of course, any high-profile person in the public eye enough may be photographed tens of thousands, or even millions, of times in a wide variety of contexts. Anyone wishing to spend the time and effort to comb through photos searching for a specific, seemingly significant wave or position of the hand or fingers can surely do so.

Concerns about “hidden signs” go back centuries, though rumors about hidden signs in the mass media specifically emerged in the 1950s with the publication of The Hidden Persuaders by Vance Packard. In the book, Packard claimed that a movie theater had successfully boosted its concession sales by flashing subliminal messages to drink Coca-Cola and eat popcorn. The claims were later debunked, but the fear that seemingly ordinary images contained hidden messages was implanted in the public’s mind. Two decades later, Wilson Bryan Key, in his influential and best-selling 1970s book Subliminal Seduction—with an introduction by noted media scholar Marshall McLuhan, much to his discredit—picked up the alarmist theme and claimed that advertisers secretly embedded images of sex and death in their ads to manipulate people into buying their products.

Key, Alex Jones, and their ilk play an important role in the promotion of conspiracy theories. They act as the self-appointed revealers of truth, exposing subtle and hidden signs that ordinary people (or sheeple, depending on the “wit” of the conspiracy theorist) miss. Through their wide-but-shallow knowledge of how the world really works (informed by everything from following the money to hunches, anonymous tips, random internet comments, and so on) they help others see the light.

These rumors are fueled by ambiguity, and the mind’s pattern-seeking tendencies play an important role in these conspiracies. Humans try to make sense of the world, and in the process sometimes see patterns and meaning where none exist.

We see this psychological process at work when we find faces and figures in clouds, tree trunks, stains, Rorschach blots, and other ambiguous stimuli. This phenomenon, called pareidolia, is well known in psychology, and it is the cause of many supposedly mysterious and miraculous events (including the famous “Face on Mars”). Examples are all around us; in fact, if you have a New Hampshire state quarter, you have an example of pareidolia in your pocket or purse (take a look). As Carl Sagan noted in The Demon-Haunted World, “The pattern-recognition machinery in our brains is so efficient in extracting a face from a clutter of other details that we sometimes see faces where there are none.”

We see real or imagined hand gestures in photographs and videos, and the conspiracy-minded among us “recognize” (or match them to) other symbols and images freighted with meaning and symbolism. They share the discovery with others, who spread memes and information on social media.

Some people believe that the Denver International Airport, for example, is tied to conspiracies about the collapse of Western civilization. Some say there’s a top-secret underground bunker for the world’s elite to survive a nuclear war (or the Mayan 2012 apocalypse). Some say the airport must have a connection to Nazis since the runways form a perfect swastika (actually, they don’t). On his TV show Conspiracy Theory, ex-Minnesota governor Jesse Ventura says, “There’s a lot of strange things about this airport. It’s twenty-five miles from Denver; that’s nineteen miles further away from old Stapleton Airport, which seemed to be just fine…” It’s not clear why Ventura believes that new airports are always built closer to the nearest city than previous airports, but skeptics are not so sure anything mysterious is going on.

It’s nearly impossible to summarize the vast number of ordinary events and objects at Denver International Airport that have been misinterpreted, twisted, and sensationalized into “evidence” for a Zionist New World Order Illuminati conspiracy to control and kill American citizens. There are facets of its planning, its design, its construction, its operational history, and even its artwork that conspiracy theorists point at as proof that we’re all doomed.

Yes, perhaps the strangest claim of all is that the conspirators have gone out of their way to announce and describe their evil plans to the world. They say all the signs are there; it’s all laid out in front of you, if you just understand how to interpret the clues and signs. Conspiracy folks point to murals in the airport depicting World War II–era genocide and environmental degradation, along with a message of global unity, peace, and hope. Reading meaning into art is a time-honored tradition, but the conspiracy-minded find messages about Nazis, Mayan 2012 doomsday predictions, global destruction, the collapse of the American government, and even extraterrestrial contact. Conspiracy theorists love to uncover (or fabricate, depending on your point of view) clues to innumerable hidden agendas. (For more on this, see Dunning’s Skeptoid episode.)

Well aware of the airport’s conspiracy-laden reputation, officials there have decided to have some fun with it. According to the Denver Post, a series of large posters have appeared throughout the airport “confirming” many of the conspiracies.

The graphics are plastered over temporary walls that surround construction zones in the airport. One hints that that the wall is hiding a “new Illuminati headquarters,” or a “remodeling of the lizard people’s lair”—or just new restaurants. Emily Williams, a spokesperson for the airport, said the airport is officially embracing the conspiracy conjecture. “I think that we recognize that conspiracy theories are part of our brand. It’s a fun way that we can engage with our passengers,” she said.

This illogical contradiction is common in conspiracy thinking: It’s a carefully hidden top-secret plot that no one is supposed to know about—except that the conspirators made sure to leave important clues so the public would know about it. Perhaps the most famous case of a conspiracy claiming that the conspirators purposely left clues about a hidden truth was in the late 1960s, when The Beatles guitarist Paul McCartney suddenly died. The remaining Beatles—along with their manager and others—conspired to keep McCartney’s death a secret, going so far as to hire a look-alike and sound-alike to take his place in public appearances.

Why? As any good conspiracy theorist worth his salt will tell you, follow the money to reveal the truth: The Beatles were the most popular band in the world, earning obscene amounts of money for promoters, record companies, merchandisers, and others. McCartney’s death could not be allowed to kill this cash cow.

Yet while the conspirators carefully kept the public from finding out about McCartney’s death, they also decided that they should reveal the truth in album covers and music. For example, on the cover of the Abbey Road album, all four Beatles are photographed striding across a zebra crossing—but only McCartney is barefoot. On the cover of Sgt. Pepper’s Lonely Hearts Club Band, McCartney is the only Beatle photographed with a hand over his head—which, for those smart enough to understand the reference—is a symbol in some cultures that he was memorialized in death. There were dozens of other references in photos and lyrics, all cited as proof and evidence of the conspiracy. It all made sense to many people. And it was all, of course, completely wrong; McCartney remains alive and performing to this day.

In 2013, pop star Beyonce was accused of using her Superbowl performance as an opportunity to tell the world during the halftime show that she’s part of a secret society bent on world domination by making a diamond shape with her hands—said to represent the Illuminati. Could it be that she was letting the world know about her involvement with the Illuminati (in direct defiance to its core tenets)? Or could it be that she was making a diamond symbol with her hands as a plug for her husband Jay-Z’s record company, which uses a diamond as its logo? Or could it be that conspiracy theorists don’t realize that there are only so many symbols that can be formed with four fingers and a thumb, and that by random chance many of them will look similar?

So is it possible that Mexican-born, half-Jewish Zina Bash is part of a white nationalist cabal and specifically requested that particular seat in the audience where she could somehow be sure that her hands would be visible from one particular camera angle, so that at some point during the hours of sitting she could flash a secret hand sign to racists tuning in to the Senate Supreme Court confirmation hearings hoping to see a reassuring sign that she’s on their side? Sure. Anything is possible.

What’s plausible, likely, or evidence-based, however, is another matter entirely.