As we near the opening night for Thomas John Psychic Medium at Cleopatra’s Barge at Caesar’s Palace in Las Vegas, which is January 16, 2020 (I can hardly wait), I thought we would take another look at one of his flawless readings. This was suggested by one of TJ’s biggest YouTube fans. This video was uploaded to YouTube on January 10, 2018, by ABC 7 Chicago – Windy City Live and has over 73K views. ABC 7 also gave TJ a 6-minute free commercial plug with his 2018 psychic predictions. Oh yeah!  2018 apparently will be the down-fall of Kim Jong-Un, President Trump will NOT be impeached, and his approval numbers will rise. Oprah will run for President in 2020, February 2018 across the country will have record breaking cold numbers and O.J. Simpson will get remarried. Opps, TJ, not so accurate!

The audience video readings is 8:42 minutes long, and half of the time it features a mother and son sitting in the third row of the small audience. TJ goes right up to them and said he was “getting the strongest connections” from them. TJ reads the couple for about 5 minutes. He really had a strong connection as he got exact hit after hit from them, hallmarks of hot-reading. The last part of the show is TJ reading a mom sitting in the very back row whose daughter died quickly and left behind two small children.

At the end of the first two minutes, TJ mentions a “new tattoo,” and the son rolled up his right sleeve of his dress shirt to show off a giant color tattoo. The audience let out a collective “ooooh.” The camera zooms in for a close-up of a wrench twisted in the shape of a RIP ribbon. “Big Al” written over the top and the birth and death dates for Big Al, who the son confirms is his father. 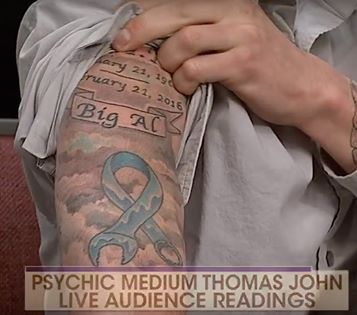 I should stop here and say that one of the YouTube commenters claims that he was this person, JC. His name is far too common for us to research. But with the dates from the tattoo, researchers were able to quickly find the correct person, his mom, and other family members including an obituary for “Big Al” with the correct birth and death dates.

I’m going to give you more details of the reading in a minute, but I need to be clear at this point and ask how could TJ know who was going to be in the audience that day? He needed at least 30 minutes to find the same information we did. Is there a way that TJ could have known to read JC or his mother’s Facebook posts? Those of you who have been following my articles about grief vampires should know the answer to that: there are many ways TJ could have known who would be in the audience at least 30 minutes prior to the taping. Keep in mind that maybe TJ is speaking to the dead.

Other options could be they were put there by the ABC 7 people, they could have been stooges, or they could have been friends of someone who works for the show. JC could have stated his name and shown the tattoo to any number of people during the wait to get into the audience. Maybe ABC 7 had a list of names or screen the people who want to show up to talk to the medium. Oh, my goodness there are many ways to get this information. But the simplest way is for TJ to ask, “Who is going to be in the area and wants to get a reading?” If he were to ask on Facebook in advance maybe people would respond and all TJ (or his staff) would have to do is look at the Facebook profile of the person who would be attending and gather information like that. Then find them sitting in the audience and act as if they were giving off “strong connections.”

Nah, TJ would never be that obvious! Actually ask for people to show up and sit in the audience so he could read them. No way!

Except he does. Here are only two screenshots of many we have found. All the staff needs to do is click on the Facebook profiles that are open and search for compelling stories. Scroll though, take notes, make sure they have a good idea of what the person looks like so they can identify them sitting in the audience and then write them back and say, “please come to the show,” and you have instant hot-read. It’s just that easy. Each one of these people who responds to these requests seem unaware that they are being set up, or maybe they just don’t care. I don’t know, but these are his fans and they trust in his abilities to speak to the dead. They are unlikely to say anything during the taping like “all that information you just gave us was on Facebook”. 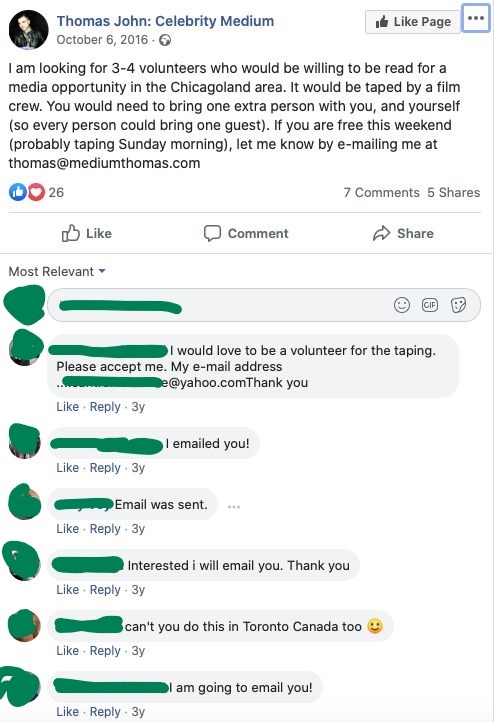 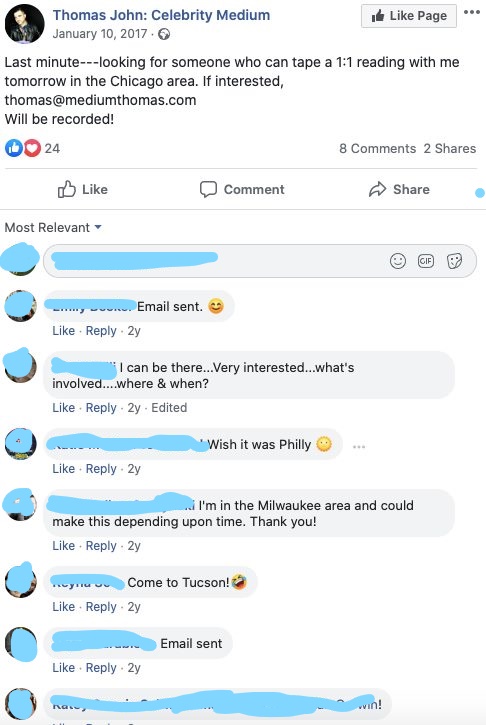 So, let’s go back to JC and his mom. Here are the “hits” that TJ gets from this pair.

Once you have JC’s Facebook page or his mother, you can easily find out all the above information. We are able to find the dead spirits of Big Al, Ester, and Gary and the living, sister and daughter.

The screen shots published here are all public posts available on the internet; they show the intimate details of life and death that we social creatures share with each other. I find it very uncomfortable sharing these screenshots, so I have removed all the names. I have all the screenshots and links to everything saved if someone wants to challenge what we found. But If someone wanted to follow the same path as we did, anyone could find the same information.

As you listen to the video of the readings and then look at these screenshots you will see how much detail people share. I often hear from people the phrase “there is no way the psychic could have known that.” They tell me the information was nowhere on social media. People often forget how much they (or their family members) share about their personal lives. They may not even realize that the information is public to the world. They also seem surprised that a psychic would go to the trouble to look at social media posts.

One of the first things we found was Big Al’s obituary. It lists that he had prostate cancer, where he lived, what he did for a living, and all the family that will miss him and those that have already died. From this obituary, we can glean every one of the names that TJ mentioned in the video.

The next post was from Big Al’s daughter on Facebook; she shared a story of a video (which included a link that we could watch) of Big Al giving his wife a ring. This video was three months before Big Al died. The daughter shared that her parents had a “fairy tale love” that they were “truly soul mates” and “best friends.” She also says that her mom “wears that wedding ring everyday.” And she ends the post with “I truly want to believe my Dad is watching over us, and that we will all be together again one day.”

I’m including a screen shot from JC that shows the same tattoo that he showed on the Windy City video. 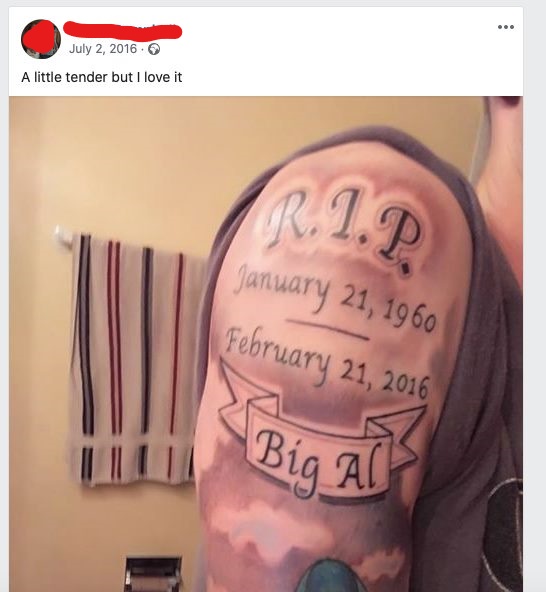 TJ felt that there was someone who had car issues, and the screenshots we found correspond to that— “Wtf my car won’t start, what a great way to start my new year …”—and then in the comments they discuss other car issues.

TJ mentions that there is a “torch being passed down to you” meaning to JC. Going to the mother’s Facebook page, we found a post from 2016 talking about the trouble with the sump pump going out and how wonderful it is that her son JC has stepped up to take on the role of Big Al. The daughter posted in the comments “you have definitely been stepping up fixing stuff Dad would’ve done. I know Dad is looking over you, and so proud of the man your becoming.”

The part about there being two funerals close in time together almost confused JC and his mother, untill TJ pushed it a bit and made them think about it. Also, there was something about beers. Well here was the screenshot we found on the mother’s Facebook feed showing a strong relationship between these two men, Big Al and his friend. 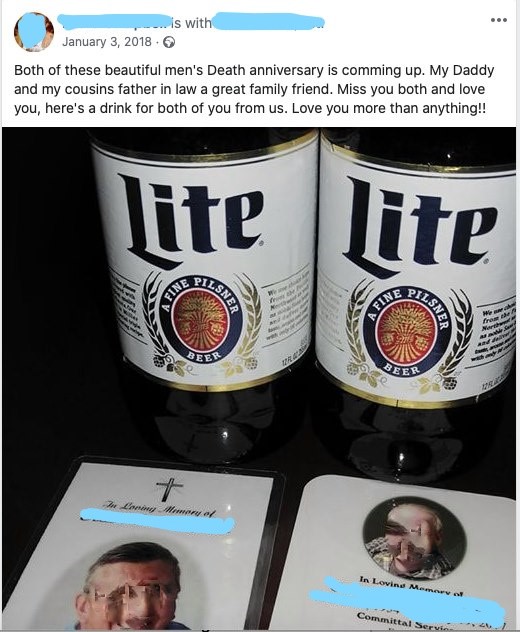 TJ talks about two different Christmas times, in 2016 and 2017, that the family mostly skipped Christmas traditions in 2016 but went back to normal in 2017. We searched a bit to find the corresponding posts but found them on the daughter’s page. The family in the Chicago area flew to Maryland to celebrate Christmas saying, “I know my Dad would want us together on our first Christmas without him.” And then in 2017, we found a post again from the daughter saying “Merry Christmas Daddy in heaven. It’s our first Christmas home without you. The house is decorated the way you always had it … .” She also posted a picture of Big Al with his granddaughter and notes how much the granddaughter misses her PaPa.

The second reading is for a mother named DM whose daughter K died from heroin, leaving behind two babies. K’s struggle with heroin was very public and she was not at peace while alive. DM stated on her Facebook page that she had a fundraiser with a band at a pizza place to help support K’s children. All things TJ mentioned in his reading with DN. We have screen shots of everything that TJ says he heard from the dead. Reading through the grief of the Big Al’s family was bad enough; I don’t want to share the pain K’s family suffered though also. If someone wants the links or screenshots, I’ll share them with you, as I have everything.

Since writing this article for Skeptical Inquirer online, I’ve come to learn that DM has died in the past couple months.

So, there you have it. I could have continued to post more screen shots; there are more videos and comments from these loving families. It is very personal and intimate to troll though people’s Facebook pages. What I’m publishing here are all public posts; anyone could find them if they bothered to look. By the way, I have a team of dedicated researchers that I would like to thank for all the work that they do.

Let me be clear: grief vampires prey on loss, loneliness, and pain; their platitudes offer nothing helpful. There is no entertainment value in what these grief vampires do. Remember that most of us are susceptible at some point in our lives if we were to find ourselves in a desperate moment. So, show some kindness toward these people who are the victims of this con.