The Teacher Institute for Evolutionary Science (TIES) stresses the importance of promoting teacher leadership in the United States. Here at TIES we feel that our fellow teachers are our own best resources. We are looking for high school and college biology educators who are interested in presenting our TIES workshops to middle school science teachers in their state. Our reasoning is that a middle school science teacher will typically cover many areas of science within his/her annual curriculum, including earth science, physical science, and life science. It is virtually impossible to become an expert in all of these areas, at least not initially. The purpose of TIES is to inform interested middle school science teachers about the most up-to-date concepts of natural selection, common ancestry, and diversity in order for them to confidently cover the topics in their classrooms and fulfill their curriculum requirements. In addition to providing science teachers with innovative professional development opportunities, TIES also has ready-to-use online resources for the classroom, including presentation slides, labs, guided reading assignments, and an exam. 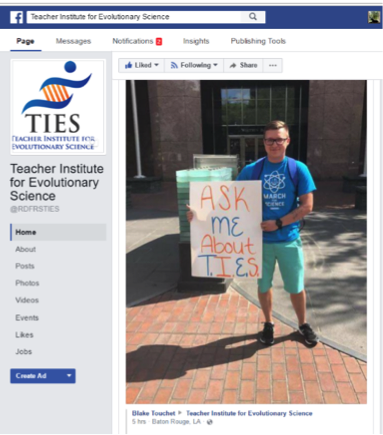 Bertha Vazquez has been teaching middle school science in Miami-Dade County Public Schools for 24 years. She has BA in Biology from the University of Miami and a Master’s in Science Education from Florida International University. A seasoned traveler who has visited all seven continents, she enjoys introducing the world of nature and science to young, eager minds. An educator with National Board Certification, she is the recipient of several national and local honors, including the 2014 Samsung’s $150,000 Solve For Tomorrow Contest and The Charles C. Bartlett National Excellence in Environmental Award in 2009. She was Miami-Dade Science Teacher of the Year in 1997 and 2008 and was one of Florida’s 2015 finalists for the most prestigious science award in the country, The Presidential Award for Excellence in Mathematics and Science Teaching.

News from the Teacher Institute for Evolutionary Science project, funded by the Center for Inquiry and Richard Dawkins Foundation.

Other Articles from TIES