On Saturday, June 24, the conference “70 years of Flying Saucers, Science, Myth and Fiction” was held; it was organized by Eventos Anómalos (Anomalous Events) and the Patrimony and Beliefs Department of the Institute of Historical Research of Roca Museum, Buenos Aires, Argentina.

Eventos Anómalos (Anomalous Events) is a private enterprise that organizes events where people can find a proper place to express their ideas, knowledge, creations, or scientific, artistic, or intellectual presentations and show these to the public. Its director is Teresita Escario and Eventos Anómalos was created by journalist Alejandro Agostinelli.

It was a very intense day, from 9:00 a.m. to 8:30 p.m. The event was supported—among others—by CFI Argentina and was entirely dedicated to flying saucers and on several subjects related to them. 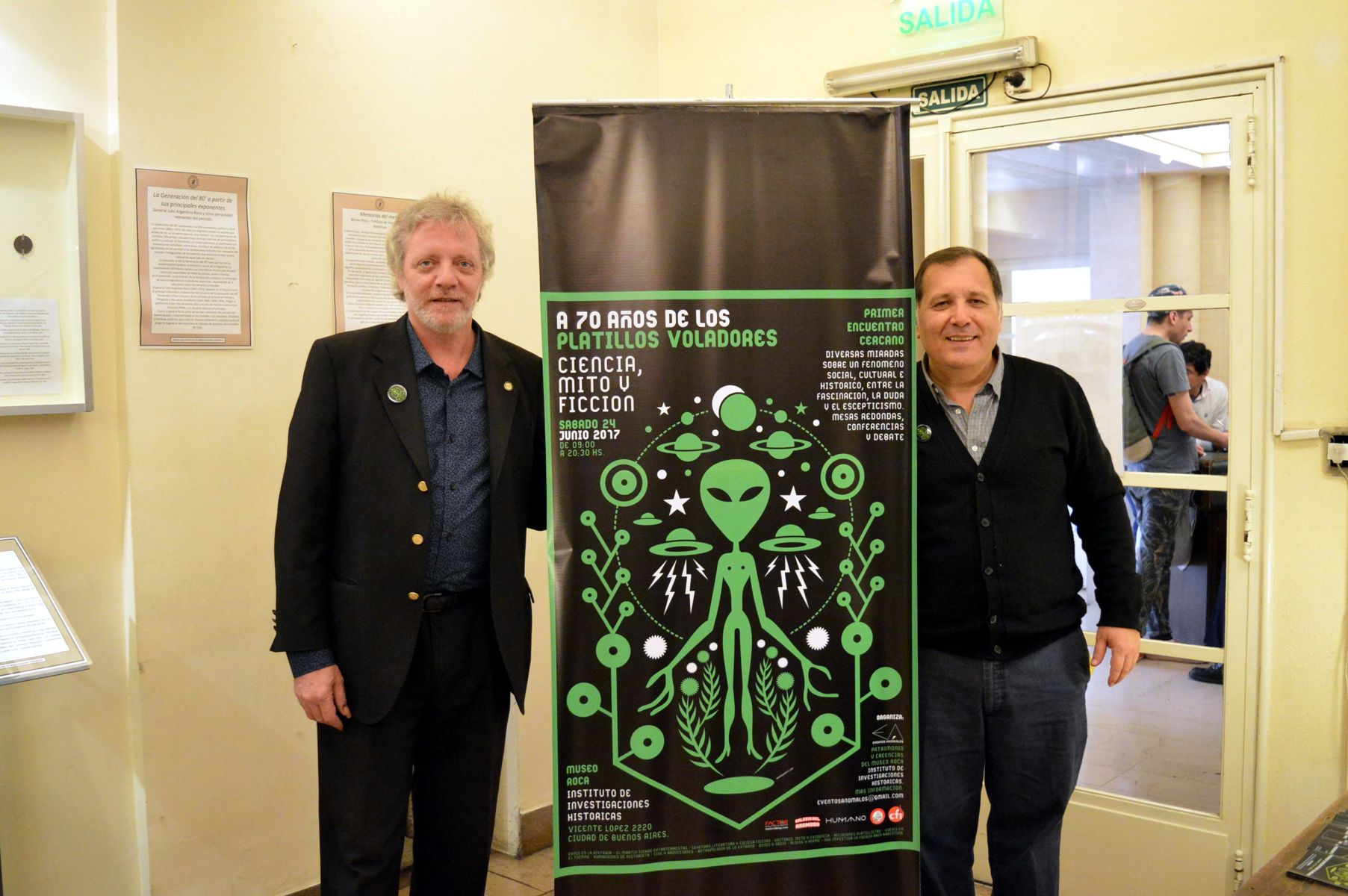 Alejandro Agostinelli inaugurated the conference explaining the reason and meaning of the event: seventy years after the historical sighting of the commercial pilot Kenneth Arnold, it is still interesting to organize a meeting with specialists of several subjects giving their points of view on the UFO phenomena according to their own investigations carried on through years. “None of the speakers was chosen in an improvised way,” Agostinelli emphasized.

The first roundtable was called “Flying Saucers in History.” Psychologist Juan M. Corbetta talked about “Spiritualism, Mediums and Extraterrestrials.” He stressed that Allan Kardec, in his book The Book of Spirits, refers to the possibility of contacting with extraterrestrials; though, in spiritualism, the term extraterrestrial has a more spiritual connotation than that of an alien who inhabits another planet. It was very interesting the description of the medium experience of Helene Smith, who claimed to be a reincarnation of a Hindu princess and also of Marie Antoinette. As a result of the sessions investigated by psychologist Theodore Flournoy, the French researcher published the book From India to Planet Mars, where he explained that the alleged Martian language of the medium in trance was a mere transliteration of the French language.

The next presentation was “UFOs and Interplanetary Voyages during the First Peronist Government.” Researcher Hernán Comastri analyzed several personal letters sent to President Juan Domingo Perón by individuals who wanted to collaborate with the development of the political project using drafts and drawings of technological inventions introducing flying saucers that supposedly other world powers were constructing.

Journalist Agostinelli referred to a case of the contactee Eustaquio Zagorski who claimed to have traveled on a flying saucer and learned extraterrestrial language, which he named “Varkulets.” He caught the interest of an ufologist Jesuit priest, to whom he made a translation of the “Martín Fierro” (1) book (traditional in Argentina) to this supposed extraterrestrial language. However, the Argentinian ufologist Oscar Galíndez was successful in proving that this was a transliteration of Spanish language writing an historical article called “Cryptoanalysis of Varkulets.”

The Martians of Oesterheld

Strip cartoonist and draftsman Felipe Ávila referred in detail regarding the roll of extraterrestrials on the comics written by Germán Oesterheld, making an exhaustive analysis of his great work El Eternauta: the so called “manos” (hands), subdued by its superiors, the “them,” by means of the “terror gland” in order to have no fear because if this happened, the gland activated itself and inoculated a lethal poison to its carriers.

One of the best lectures was given by astrophysicist Gustavo Esteban Romero about the possibility of time travel. He explained the counterintuitive theories of special and general relativity. He made an analysis of those theories regarding the possibility of time travel, concluding that those theories, specifically the general relativity theory, supposedly allowed time travel. But he emphasized that the current technology is not enough to make time travel possible. Difficult to understand by someone who is not a physicist or a mathematician (worm-holes, black holes, space-time dimension), Romero tried his best explaining the subject as good as possible. 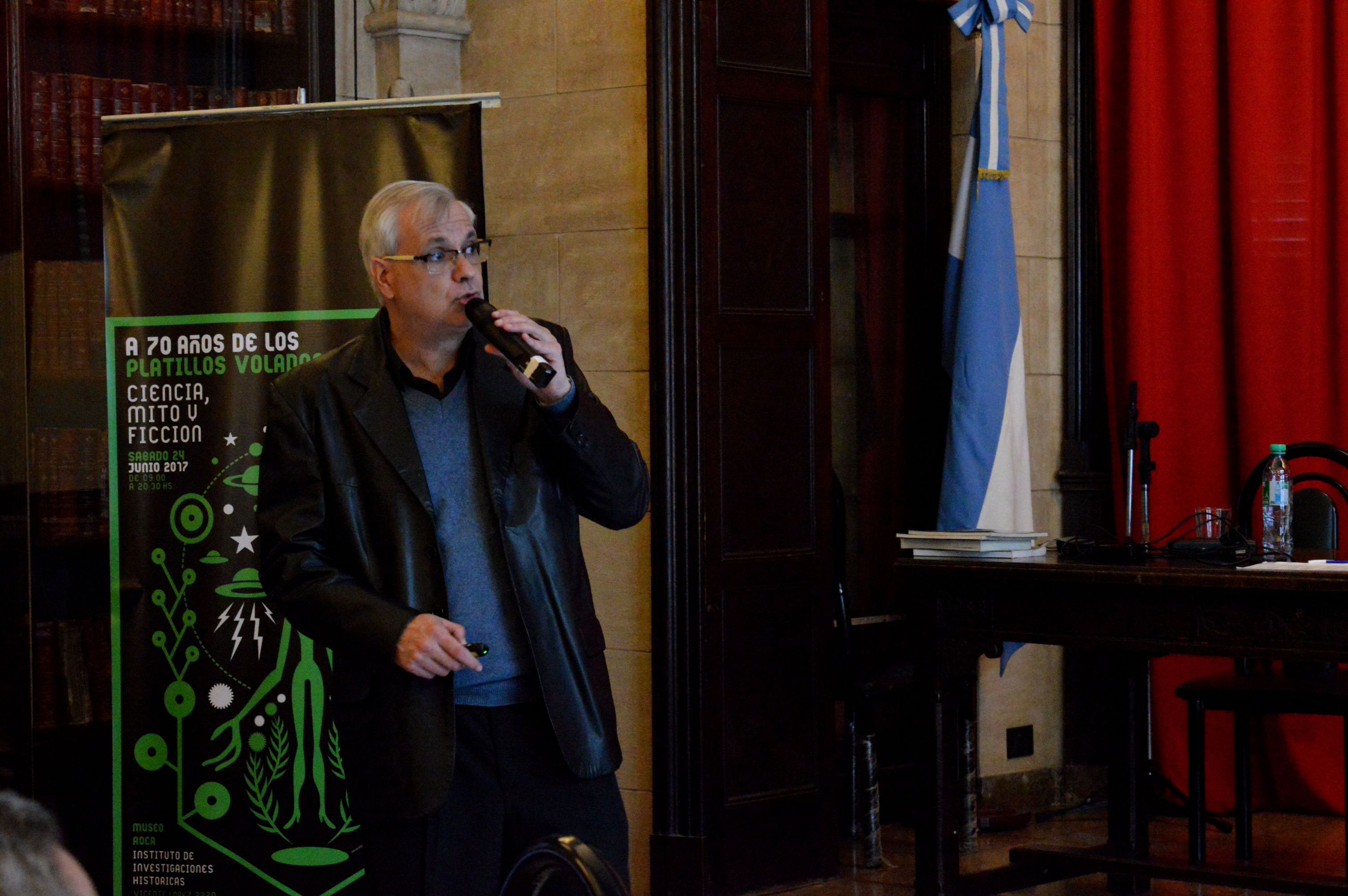 Gustavo E. Romero, Astrophysicist in a brilliant lecture about time-travelling

Abductions and Shamanism: A Controversial Lecture

The controversial moment of the day was the roundtable about “Abductions and Shamanism.” Agostinelli tried to organize a roundtable about abductions with the presence of an expert on the subject, who could give a scientific or skeptical approach, but this was not possible. So, the only opinion was that of the transpersonal anthropologists who gave their presentations starting with the case of Juan Pérez.

Documentary Director Alan Stivelman projected a fragment of his documentary that he made taking this case and pointed out the interest it generated on ufologist Jacques Vallée.

Anthropologist Diego Viegas presented “The Pérez Case: extraterrestrials or Guaraní (2) initiation?” and definitely took sides on the following issue: the abduction case, of which he never doubted, wasn’t a contact of the fourth kind caused by extraterrestrial beings but a shamanic initiation truncated by some reason that remained unclear. He showed an illustration representing the boy Juan Pérez, 12 years old at that moment, inside of what seems to be a spaceship with two entities: one of them almost identical to R2D2—from the Star Wars movies—and the other one which was three meters tall.

Viegas notes that “maliciously, skeptics make a relation of the robotic figure with R2D2,” but he discovered that in fact the film was released after the incident.

In order to assess that what he said was correct, we did some simple research through the Internet, and it showed the contrary: the event that has taken place in 1978 occurred after the film was released, on December 1977. That is to say, the chance that it was an imaginary projection of the character of the movie has been reinforced significantly.

Psychiatrist Néstor Berlanda, supported Viegas’s presentation, as they are part of the same group, adding that the supposed extraterrestrials who took part in the case could be revealed entities of the Guaraní or Mapuche mithology. Afterward, he established a frenetic comparison of the eyes of the “gray” with entities from different parts of the world (pictorial illustrations of the Anasazi indians, the Moais of the Easter Island, and so on). Viegas and Berlanda manifested their worry about the Pérez situation (we don’t know if physical or mental, or both) but they said the contactee showed no alteration or psychical disorder, though we could not find the diagnostic proofs of that claim. Both insisted on the need to complete the recovery shamanic process so that the “initiation” experience—occurred during an altered state of consciousness, as they claimed—would not remain truncated.

Going deeply on the idea of “transpersonalization,” Berlanda pointed out that the phenomena repeats from generation to generation (he considered suggesting the name and surname of the abducted, that is equivalent to a John Smith) and mentioned Juan’s mother, but he didn’t go further. He added that some of the psychobiologic features that make a person to be abducted are related to a family similar history.

Humanoids’ Literature at the Beginning of Argentinian Science Fiction

Writer Carlos Abraham made a very detailed exploration of UFOs and extraterrestrial beings in the Argentinian science-fiction book of the nineteenth century until the middle twentieth century, concluding that “each period of history builds the extraterrestrials that its society needs.”

ERKS. How to Enter and Get Out of a “Dimensional Gate”

From our point of view, the most interesting roundtable, that generated the greatest debate, was by history professor Fernando Soto, anthropologist Alejandro Otamendi, and journalist Fernando Diz, titled “ERKS. How to Enter and Get Out of a “Dimensional Gate.” Let’s say: the Era of the flying saucers sanctuaries.

First, a video was projected where the producer of the film 30 years of silence, the secret of Guillermo Terrera, Diego Arajondo, referred to the story of the “baton” that supposedly was given to the main protagonist of the ET beings.

From the beginning, Fernando Soto introduced himself as a skeptic of Terrera’s story and also to the intra-terrestrial city called “ERKS,” though he was very interested in knowing how that legend was constructed in the city of Capilla del Monte (Córdoba province of Argentina), to the point that it became a tourist attraction.

Social anthropologist Alejandro Otamendi, who gave a very professional presentation, narrated the history of the origin of the myth from the apparition of a burned out surface of 100 meters in diameter, and the impact that it had on the media, attributing the event to a spaceship.

Thus appeared the idea that at the zone of Uritorco hill existed a subterranean or inter-dimensional city called “ERKS,” whose spokesperson was Terrera who kept the “cane of command.” Since then, a unique sociocultural phenomenon emerged all over the country.

Journalist Fernando Diz moved to Capilla del Monte (Córdoba Province) in 1990 and dedicated his life to politics. Since then, he carried out a series of investigations about the sociocultural phenomenon finding—many years later—the testimony of local people relating how the phenomenon was directly produced by the local authorities and media hired to promote tourism. The whole thing was originated from a spark leaving a big track. Local people took advantage of this event to increase the prices of properties in that zone. Of course, this was an extraordinary and complex sociocultural phenomenon that had its own and unique features.

Historian Boris Matías Grinchpun revealed the origin of Hitler in Antartica. Starting with the story by Ladislao Szabó, a Hungarian-Argentinian journalist who managed to publish his conspiracy theory to Time magazine, he reconstructed the conditions of production that made this myth plausible. It is the story of an Adolf Hitler alive after the Second World War, who feigned his own death, and ran away to the South Pole in a submarine while he built up flying saucers. The story is ridiculous, but it reached the History Channel. We have seen occidental movies and series that have been made about aliens, but … How does the cultural Japanese treat an alien story like that? Historian Jonathan Muñoz took the audience to carry on a journey through the Japanese history and its relation with the Occidental world. The Japanese culture has considered strangers as demons many times, and the speaker proposed a parallelism between the historical view of the stranger, in the history of that country, with the idea of extraterrestrials captured by the Mangas, its relationship with the right-wing nationalism, the militarization, and a critical view of the government. It was a very interesting lecture about a strange culture for us like that of Saturn planet.

The last lecture of the day “Ufology as Scientific Expert Examination” by Rubén Lianza, military pilot, graduate on Aerospace Defense Systems, and principal member of the Commission for the Study of Aerospace Phenomena (CEFAe) of the Argentinian Air Force.

His presentation was one of the highlights of the conference. Lianza explained the methodology of investigation used by CEFAe to deal with sighting UFO cases. Using the scientific method he could solve the major part of cases he studied. The lecture was also an introduction to critical thinking. He presented some clues against wishful thinking which, so many times, convince people that what’s not true seems to be true. Thus, the researcher concludes modifying the evidence so that they fit into his theory. Lianza pointed out that proof, not wishes, must lead us to an explicative theory. Using a digital program for image processing, the CEFAe analyzes photos of supposed UFOs sent by the public. Conclusion: 98 percent of the cases ended in water drops on the lenses, tennis balls, swallows, or airplanes. During Lianza’s presentation, one furious ufologist exited. 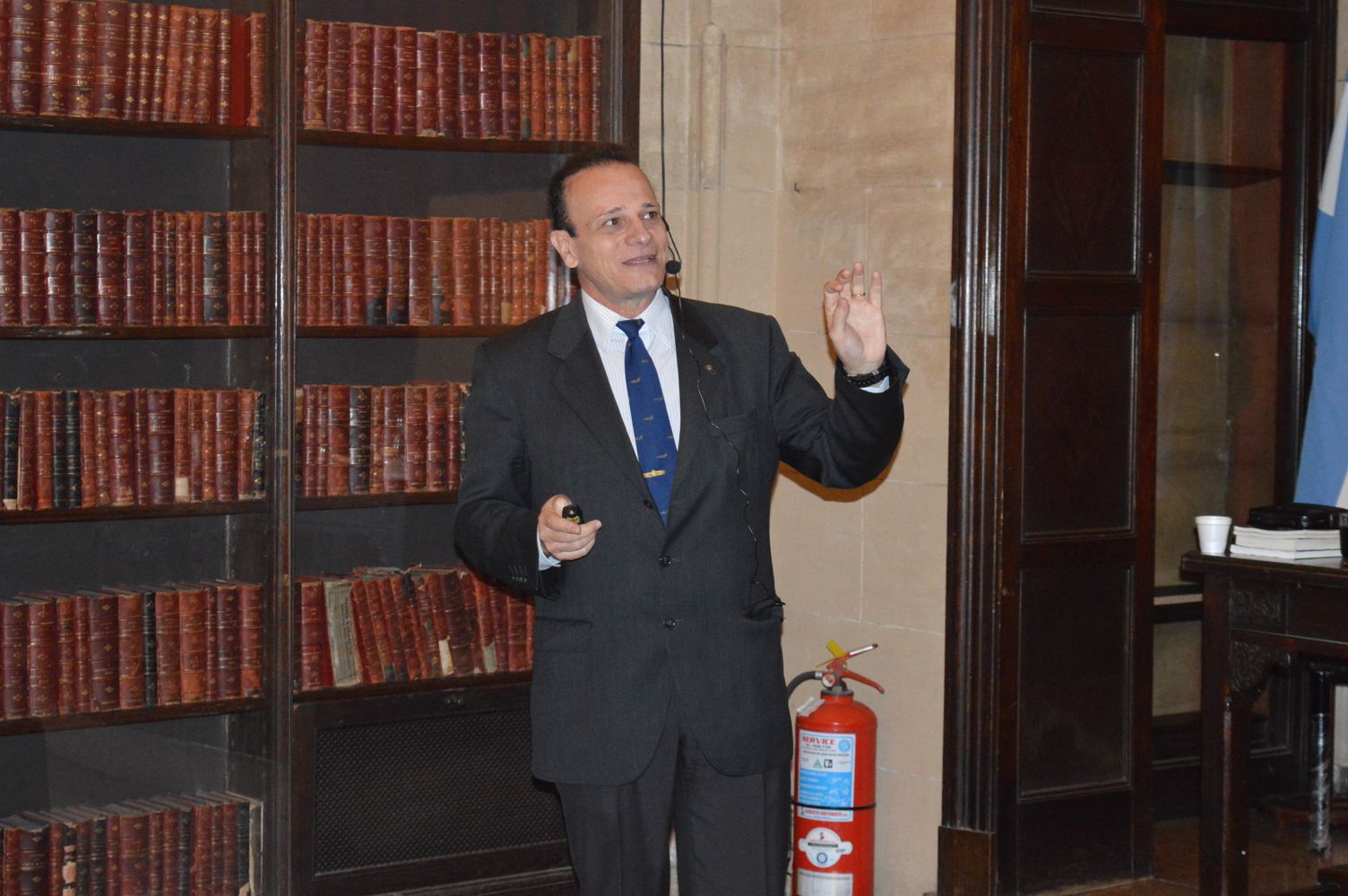 If you wanted to listen to the experts, and learn, this meeting achieved its goal, no doubt. “70 years of Flying Saucers: Science, Myth and Fiction” was a great event for all those who dare to deal with UFOs world.

According to Agostinelli, it’s a serious mistake to tease an “enlightened.” “It’s more important to understand the social construction of the phenomena; and that is achieved knowing the roll played by every node of the network of actors that allows the history to grow on the media and the public consideration.”