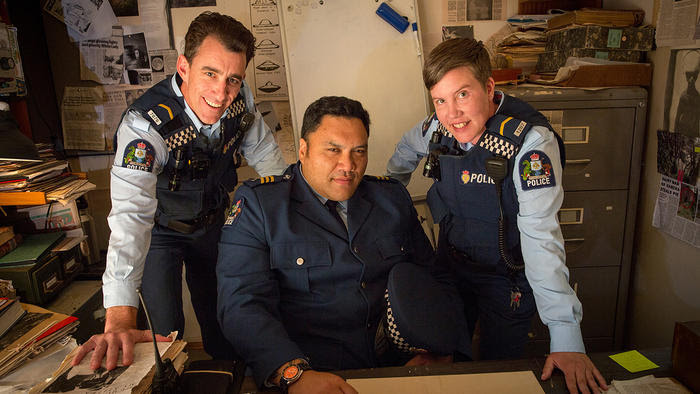 Before I begin this review, a quick shout-out to the skeptic folk of New Zealand, who hosted a very fine (although a little shaky post-earthquake) conference in Wellington back in 2013.

I recognized Cuba Street from my time in that city; it’s a paved arcade area that features prominently in the first episode of Wellington Paranormal. Officer O’Leary (played by actor Karen O’Leary) demonstrates some very community-minded policing just after midnight, while addressing the documentary camera following her. She approaches a young woman who appears to be lost, perhaps left behind by her friends.

It’s after that point that everything goes completely and utterly haywire in this new mockumentary by the New Zealand Documentary Board (created by Jemaine Clement, Taika Waititi, and Paul Yates, who are also responsible for another related paranormal comedy, What We Do in the Shadows).

With long-Samara-of-The-Ring-style dark hair and glassy eyes, the girl is introduced with a quick rattling sound effect and a sudden spew of Exorcist-inspired green vomit. If you’re even slightly familiar with the tropes of horror movies, then you’re in for a treat. However, the shameless borrowing of the generic conventions is completely lost on Officer O’Leary, who sums up her inquiry about the girl’s regurgitating wellbeing with a bland “…I guess that’s a no…. That’s quite a lot to come out of a small person…”

O’Leary is soon joined by her cheerfully befuddled partner, Officer Minogue (actor Mike Minogue), who is unable to spot his fellow officer standing a few feet away from him, let alone the huge puddle of puked ectoplasm he nearly slips over. “…Is that the Unholy Realm in Hataitai?” he politely note-takes, before “Bazu’aal” hurls him halfway down Cuba Street into a pile of bins.

As the officers transport the now glowing and pulsating demonically possessed girl back to base, we are introduced to what has apparently become a necessary part of the duties of local law enforcement—the highly classified Wellington Paranormal Unit. Headed by Sergeant Maaka (actor Maaka Pohatu)the team have an other-worldly weary response to vampires, demonic possessions, levitating creatures, and drops in real estate prices due to hauntings. The Sergeant even has a hidden Wellington Paranormal office behind some shelves, which would be the envy of the likes of James Randi and Joe Nickell.

While Sergeant Maaka claims to have an “observational absurdist sense of humor that borders on the risqué,” he is as blandly straight-faced as the rest of his team when possessed characters do things such as climb backward up the walls of the interrogation room and leap through windows to terrorize the city further. After an impressive escape scene using the split-camera security system, we are then introduced to the latest levitating incarnation of Bazu’aal’s possession, promptly dismissed as having a “mid-life crisis” while his head spins around.

By accident rather than design, the officers manage to be fairly effective law enforcement against highly acrobatic and even shape-changing demons, even though at some points they resort to using Google to figure out what to do next. The actors’ remarkable ability to keep straight faces while dealing with hilarious scenarios (such as “large circles in some crops… not sure what it’s called…”) is probably more astonishing than the creative special effects on a limited budget.

While the two episodes of a six-part series I’ve seen are only around twenty minutes long, and thus come across as more like a web video comedy than a TV series, the dry approach to extremist situations is brilliantly funny and well-paced. I look forward to seeing if the officers’ firm “Stop that! It’s a bit scary!” will be successful against other terrifying apparitions.

Wellington Paranormal aired via TVNZ OnDemand, is screening on Australia’s SBS Viceland, and hopefully will be arriving in other countries soon.