I’m writing this from stay-at-home California, and if you are reading this soon after its publication, you are likely reading it from a stay-at-home somewhere in the world. What I am asking now is “Why did this happen without warning? Why didn’t they see this coming?” No, not the governments of the world, although that’s a valid question too. An outbreak of this type was inevitable, and so it should have been planned for. What’s on my mind is “Why didn’t the damn psychics—people who claim to have magical powers of clairvoyance and such—see this coming?”

Let me be upfront and clear: the reality is that no psychic saw this life-altering, world-changing pandemic coming. Not a single one predicted anything specific that would have been helpful to avoid the trauma that is and will be affecting perhaps billions of people—financially and worse. Sure, Kim Kardashian recently posted the meme that Sylvia Browne had predicted COVID-19 in 2008, but Ben Radford has explained why that claim holds no water.

By the way, check out the recent spike of pageviews for Sylvia Browne’s Wikipedia page. Will we ever be free of her nonsense? Normally the page receives about 2,000 views a day, but in the past twenty days, her Wikipedia page has been viewed over 594,000 times. One day had over 99,200 views. One positive thing that happened was that Newsweek wrote about Radford’s article and seemingly quoted directly from Sylvia Browne’s Wikipedia page. They used the same quote that Guerrilla Skeptic (GSoW) team member Robin Cantin had added just the day before. A nice win for GSoW! 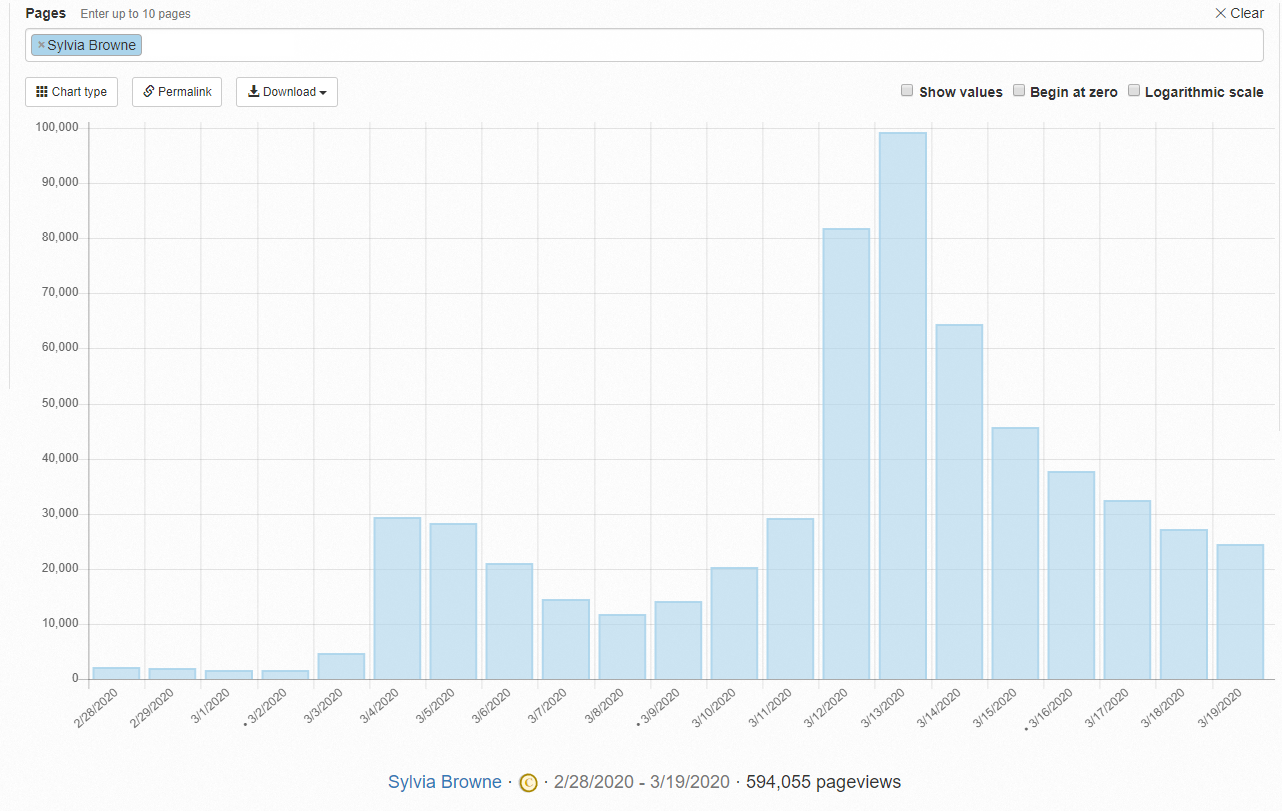 I’m sure many psychics will retroactively claim to have predicted the COVID-19 pandemic. For example, a friend of mine, Paul Lawson, sent me a link to a psychic’s website who claims she predicted it. Judy Hevenly has claims on her website of all kinds of predictions she supposedly made—some going back to 2006.

What evidence do we have for these predictions? Well, nothing, really, but her word for it. Fat chance of that being worth anything. What we can tell from this website is that it was created in 2020. (Look at the very bottom of the webpage.)

Another way we can tell that the website was created recently is that Web-of-Trust (the website rating site) shows a grey circle up by the URL, indicating that this is a new website.

We can also look at Archive.org (otherwise known as the WayBack Machine) to see that this website has not been archived other than on March 20, 2020—which is when I archived it. Archive.org trolls the internet and archives pages all the time, and it never stopped on Judy Hevenly’s? I think it’s more likely that the website didn’t exist until 2020, as the evidence seems to indicate.

Where does this all leave us? Well as some of you know, I am very interested in mediums—people who claim to be communicating with the dead. I would give nearly anything to be able to talk once again with my parents and my sister Toni. I have so many questions I would love to ask them. I have been working on my genealogy and learning a lot about my ancestors. I have spent months trying to find my great-grandparents from Slovenia, and finally I know their names: Martin Skufca and Ursula Grimm. Wouldn’t it be so much easier just to be able to talk to them than to get eye-strain searching though census and immigration forms? Which is another interesting question! Why don’t genealogists hire mediums? Or why do genealogists exist when we already have mediums? Someone should tell the Mormon church, because they have committed a lot of work to libraries devoted to genealogy. I know because I’ve used them; they are quite helpful.

You might ask: “Susan, why are we talking about these people again? Haven’t we figured this all out yet? Don’t we already know it’s a scam?” Well no, we don’t all understand this. Some of us understand it, but much of the world does not. And I want to be very clear: believers in psychics and mediums are not stupid people who deserve to be taken advantage of. We are not doing our best to introduce critical thinking to children. And with all these reality shows about mediums on our TVs and computer screens, people are fooled into thinking what they are watching is—well, reality. Why challenge it? It looks real and seems real, so maybe it is real.

Also, the majority of the world believe in a god or gods, or everlasting life with angels, demons, spirits, ghosts, and all kinds of invisible things. People are discouraged from challenging these beliefs, because doing so would be challenging their culture, their family, and all they were raised to believe.

I have a very good friend who I have known since elementary school who believes in ghosts and psychics and told me once that she believes because “it is in her culture to believe it.” That’s just the way it is. She isn’t stupid or naive; she chooses to believe and has no interest in challenging those beliefs.

So, what can I do? I can’t force changes in the school system. I can’t wave a magic wand and make everyone critical thinkers. (Wouldn’t that be something?) What I can do, and am doing, is to research these mediums that I call Grief Vampires. I have a team of people who are also passionate about this subject who assist me. We research, plan, and think of solutions to raise awareness.

It is frustrating as heck to write an article about Matt Fraser, Thomas John (TJ), Chip Coffey, or Tyler Henry that explains that what we are seeing is not real, only to learn that they have a new TV series premiering, a book coming out, a show in Las Vegas, are being promoted on morning TV news shows, and have thousands of devoted fans. At times it feels like we just can’t win.

And then a message will pop up in my email inbox or on Facebook Messenger, or I see a critical comment on Yelp or somewhere on the social media of the medium.

Those messages provide inspiration for us to continue.

We have been reaching out to some of these people on social media and talking to them about their experiences with Thomas John. Let me tell you one story.

This is one I’ve been saving on my desk for months; it arrived as a handwritten letter forwarded from Skeptical Inquirer magazine, and where the return address usually would be, it just had this written, “What do I do with his damn book?”

In the letter from an unnamed woman I will call Pat, she tells me about a reading she and her sister had with Thomas John. She starts by writing “I applaud your Operation Pizza Roll—Thomas John [article] and give it a standing ovation!”

In her letter she states that she was intrigued by TJ’s show, Seatbelt Psychic, so when she saw that TJ was going to be giving readings in a town near her they purchased VIP tickets ($125) because the general admission tickets ($25) were sold out. Pat and her sister arrived early and waited outside. They were approached by a very friendly woman she calls Rita who had been quietly observing people. The venue was a church, and there were plenty of open seats; only about forty people came to this event. Pat and her sister sat in the VIP section right up front, and Rita sat behind them. When the sister suggested they move farther down the row, Rita exclaimed that she was hoping to get to know them better.

The show started and TJ jumped from one audience member to another. When he got a few “no” responses, he moved to other people. Pat told me about a Latino family that desperately tried to get TJ’s attention, and he went to them briefly but then decided that it was Rita’s family that was actually trying to come through. And what a story it was. In Pat’s words, “[Rita’s] wheelchair bound sister had died from MS. Her drug addicted daughter had a son who had died. Then this daughter had committed suicide by throwing herself from a highway overpass. This left poor Rita having to adopt and raise her own granddaughter.”

Because we know that TJ has a prior arrest for taking deposits for apartments he didn’t own and skipping out on the money, I don’t think TJ is real interested in getting involved in doing a reading for anyone that works for the police. But maybe I’m just over-thinking it.

Pat still believes in a sixth sense and that some psychics must be real, but she gave me permission to quote any part of her letter if I thought it would help others.

She also took some parting shots at TJ:

“It saddens me to think of these audience members—the recently widowed elderly man hoping for contact with his deceased wife, the grief stricken Latino family whose daughter had died … all so desperately wanting contact with their deceased loved ones, being so manipulated and taken advantage of by Thomas John. So, whether or not you believe in karma, divine justice or atheism, there are human beings (sociopaths) who feel absolutely no guilt being a predatorial parasite on humanity. And as some people would believe, there is a special place in hell for predators like Thomas John. And as I told my sister, that even though Thomas John was a predator, it had been worth $250 to spend an evening with her.”

I have many more of these type of stories from others who have seen through these grief vampires and may publish some in a future article. For now, let me end with a couple of final things: the latest Squaring the Strange podcast is a two-parter on psychic detectives. It’s terrific and heartbreaking at the same time. Ben Radford gave hosts Celestia Ward and guest host Kenny Biddle the assignment to research psychic detectives in real time. You won’t believe what Ward and Biddle found; it may make you furious and perhaps as proud as I am of the work they are doing. If you appreciate their work, consider lending support to the excellent Squaring the Strange team.

Finally, let me say that if the fact that this pandemic was not predicted by a single person claiming to be a psychic, including TJ whose own Vegas show is now closed down (unforeseen circumstances maybe?), does not open people’s eyes to the truth, well I’m not sure what else to do, other than what I’m already doing.