I’ve become very interested in the relationship between mediums and the morning news programs giving free publicity to push psychics’ shows and private readings. I know that morning programming is trying to be engaging and fun, even showing the reporters as a friend to the viewer in the hopes of persuading them to start every morning with their show. Sometimes, as in the case of these mediums, it becomes a free commercial. What’s wrong with the morning news just giving … news?

I’m about to break down the two-minute reading that Matt Fraser gave to on-air personality Shannon Miller for NBC Connecticut Morning News in March 2018. Before I do that, I should give you a little background. I first became aware of Fraser when investigating stage mediums for an article that reporter Jack Hitt was writing about for the New York Times. Hitt wanted to watch from beginning to end how a group of skeptics would arrange a sting. And we did. Matt Fraser was in an area where we had a group of people who would attend and act the parts we gave them. Kenny and Donna Biddle and friends were amazing, and you can read all about what happened here in Operation Peach Pit. Jack Hitt’s article for the NYT can be found here.

I’ve been wanting to research Fraser in detail, but until receiving Fraser’s email asking me “Have you seen this video?” I really hadn’t found the time. Of course, Fraser didn’t send the email to Susan Gerbic, but to his mailing list that I happen to be on under a different name. I’m sure it is no effort at all for him to know which account is mine.

He sent this video to me in August 2019, but it was recorded in March 2018; I don’t know why there was a delay, but the video, which is on his YouTube channel, had already been viewed over 500K times. Fraser has over 60K subscribers, which is okay for a low-level celebrity I suppose, but nothing for someone who claims to demonstrate communicating with dead people. You would think that governments might be interested in that knowledge. Historians would be beating down his door to be able to ask questions of the past. Police departments would be clearing up all the cold cases and finding every missing child. Scientists would be interested in how this all works. Sadly, this common sense line of questioning did not occur to NBC Connecticut, because they sent in a reporter to ask him fluff questions and give him thousands of dollars in free publicity.

I’m being generous by saying “fluff questions.” Miller is completely prepared with her typewritten questions and she begins not by asking about any of the twenty-seven missing Connecticut children from the National Center for Missing & Exploited Children database. I guess Jovonna Stacey Crawford missing since 1981 or Mery Acosta missing since 2011 aren’t as important as the softballs that Miller pitches to Fraser. Miller asks, “A lot of people want to know … what the process is to work with a medium … ?” Don’t we all know how this works by now? These sorts of “acts” have been airing non-stop for decades. The credulous questions that Miller asks have no skepticism whatsoever: “It really can bring so much relief to folks … .” Hey Miller, how about some relief for the parents of these missing children?

Miller got to her third question about how group readings work when Fraser saw his opening and sprung, almost with glee: “For example, I see your grandfather behind you.” Miller nods in agreement, and the camera moves in close so we only see Fraser, giving Miller a moment to collect herself as she immediately starts crying. What we can’t see is all the visual feedback Miller is giving Fraser, showing him that he is on the right track. 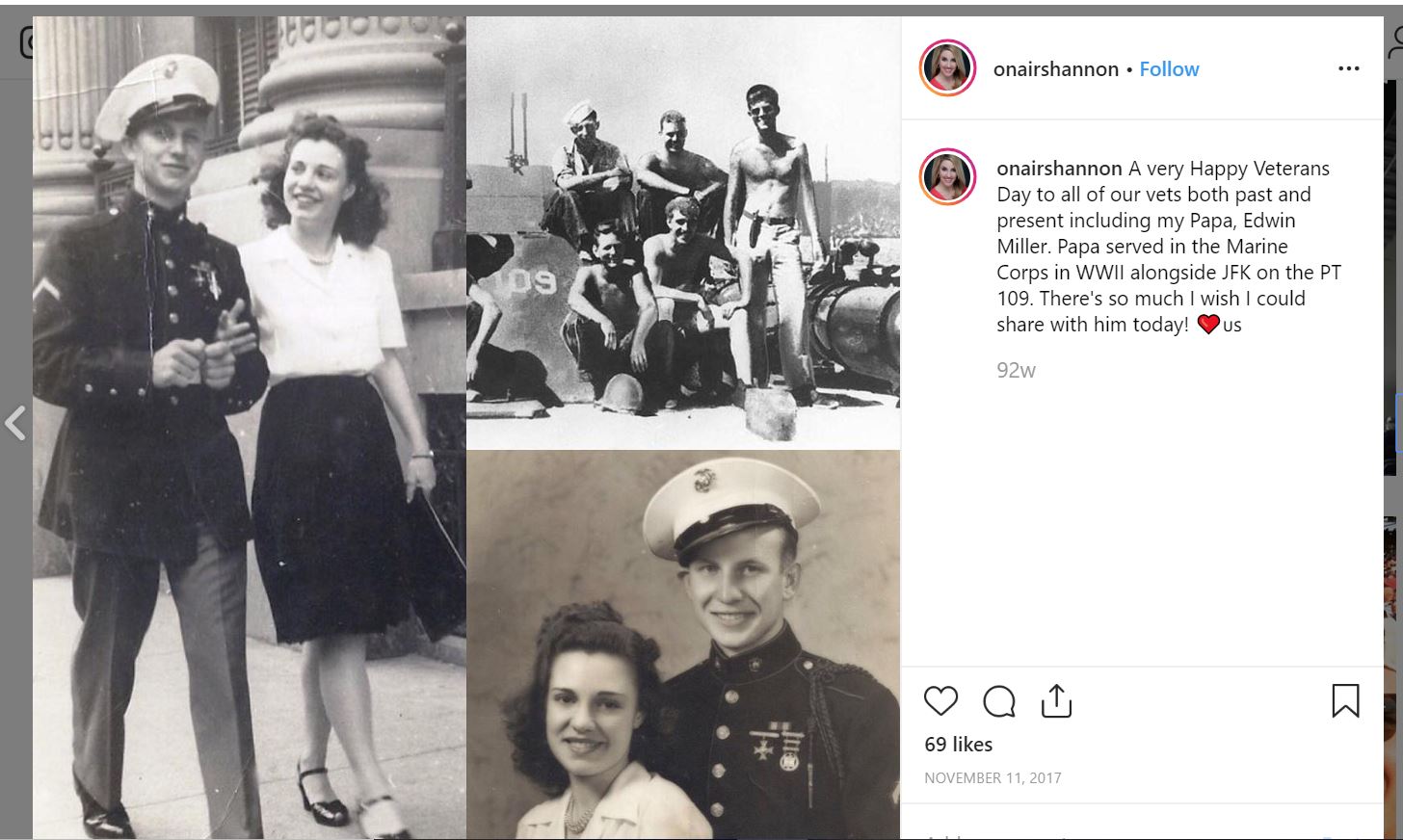 Fraser follows up with some very generic statements that would be true for most elderly men near the end of life: “He was having some memory and teeth problems near the end. He was a flirt with the nurses, and he was so very proud of you, Shannon.”

Listen to this part about the phone. See if you can pick up the verbal gymnastics.

Fraser: Were you not able to get there in time? See him in time? But you talked to him by phone?

Miller: [Nodding and trying to keep from crying.]

Fraser: He just told me that someone held the phone to his ear. You spoke to him by phone.

Miller: Mom showed a broadcast of me through the phone.

Fraser: Through the phone! Perfect! So, he knows about that.

So, Miller’s mom showed him a video of her daughter’s broadcast on her phone, which is quite different from what Fraser first said. But he is a professional; he just moves on as if he were right the first time.

Miller then endorses the reading saying, “I didn’t tell you anything when I came in,” and Fraser says he prefers it that way. Why? She only has a couple minutes with you, why wouldn’t you want to know if she had something specific to ask? 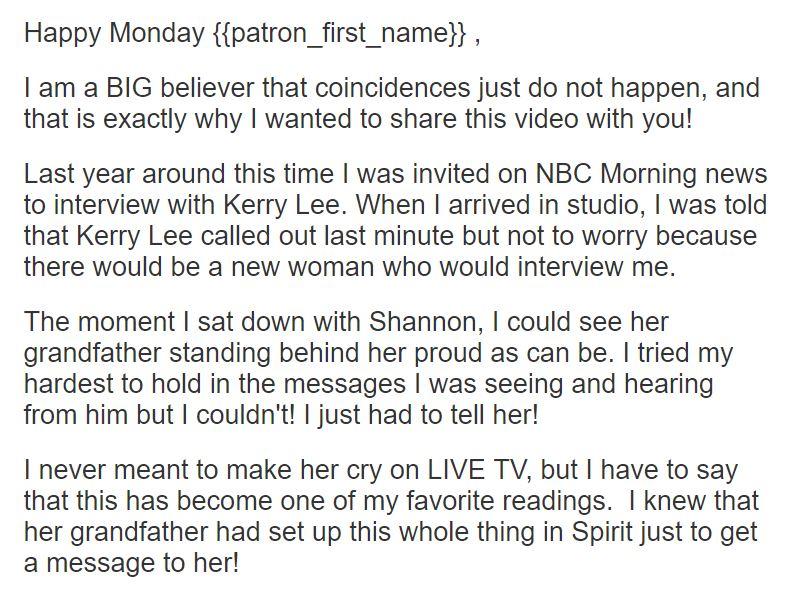 Oh really? Grandpa arranged for Kerry Lee to call out at the last minute so he could tell his granddaughter that he was so proud of her and about his new teeth? Wow! Groundbreaking news there, grandpa. Too bad you didn’t slip a little information about some of those missing children.

Miller ends the show with multiple plugs for Fraser’s upcoming events and says, “This is absolutely an incredible experience.” I know that she was caught off guard. She didn’t really have time to think. Maybe if she had a few more seconds she might have said, “I just posted old photos to my Instagram page and mentioned my grandfather was a Marine.” But when you are caught up in a moment like this, especially when you, a reporter, are crying on live television, you don’t have time to think.

So, what does this all mean? Did Fraser have time to look at her social media before the segment? How difficult is it to find her photos about her grandfather? And if Fraser looked at her post, why didn’t he mention grandpa’s name?

It took about a minute for one of my team members to find the post on Instagram and that is about how long it took me once I looked her up. Instagram is just photos, all in a neat format and her page is public, so a very old set of photos didn’t take any time at all to see. You try it.

These psychic mediums have a style. From all the research I’ve seen on Fraser, he isn’t really much of a hot reader. Like the laziest of the current crop of psychic mediums who already either have a “reality series” or are about to break into The Big Time and have honed their cold-reading skills to a seamless routine in quick five minute television interview segments, he doesn’t need to know much information about his subjects beforehand. A savvy cold reading would usually be sufficient for most morning shows. Still, when a convincing picture needs to be painted, I’m not saying that Fraser wouldn’t stoop to doing a bit of research beforehand when he knows the name of the person who he is about to do a LIVE interview with. To not take advantage of a few private moments in the Green Room or texting his manager (his Mom) for a “ringer” or two could still be in the back-pocket of this rising star. After all, in this segment he was promoting his up-coming shows.

The wise prognosticator uses hot reads only to season the stew, and it’s only one of dozens of methods to get the tears flowing. Once the waterworks start, we are in emotional territory most morning talk shows can never hope to get close to, … so why not? Psychics seldom mine too much hot-read material as having endless spot-on specific information gets suspicious if it goes on too long. Of course, it is possible Fraser is a true psychic medium and Miller’s grandfather appeared to him over her shoulder with a message about his teeth. You decide what is more likely.

Fraser is one of those psychic mediums that throws out multiple statements in a row, sometimes framed as a statement sometimes as a question. Sometimes it is hard to tell what it is he is talking about. Throw out enough word salad and something will stick. If it doesn’t work, then possibly it was for one of the persons sitting near you. Making general statements that could apply to many people and watching for a reaction, self-correcting as needed—this is called cold reading. It’s a con-mans’ skill-set and common tactic of grief vampires.

It looks like Fraser is doing pretty well for himself. He is engaged and has a reality show that will be appearing on E! Network, the same place that gave us Thomas John’s Seatbelt Psychic show. Fraser will be staring with his model fiancé Alexa Papigiotis in Meet the Frasers, coming to us in 2020. I can’t tell you how excited I am—popping the popcorn right now. He might find some time to sit down and solve some of these cold cases of missing children? We can hope.

I’ve reached out to Shannon Miller for comment and will update if I hear anything back. My thanks to my top-notch researcher as well as proofreaders April Hoy and Mark Edward.