On March 22 at 9 a.m., my alarm went off to wake me and my boyfriend up in time for our weekly online Dungeons and Dragons session. I opened my eyes to see my partner already awake (a very rare occurrence in of itself) and in rather poor sorts. He was shivering, weak, had hardly slept all night, and experiencing severe chest pain. By noon that day, I had developed all the same symptoms. A couple of days later when my boyfriend’s symptoms got worse, even as mine got better; we headed to the newly set up testing center downtown.

We spent less than fifteen minutes getting long swabs stuck into our throats and noses and then went back home to wait for the results. When his came six days later, we both felt entirely better. His results? Negative. We wrote our sicknesses off as some cold and laughed about being the kind of people who would catch a respiratory bug during a pandemic. Or at least we did until my results came in twenty-four hours later.

We had entertained ourselves trying to figure out why his results came in before mine. Both my first and last names are before his alphabetically. I was tested first, and I live in Quebec (and have a Quebec health card) whereas he was just visiting. Turns out we didn’t consider the reason that ended up being true: that I had tested positive while he had tested negative.

If you’re confused about how two people who had been living together for months and making no efforts to distance themselves from each other tested differently for the SARS-CoV-2, join the club. These results are weird in of themselves, so given that it was also April Fool’s day, I don’t blame our loved ones for not believing us at first.

Six days of quarantine, my boyfriend again became ill with the same symptoms. Because he was having some trouble breathing, he was advised to go to the hospital this time, where he was put in isolation, given a chest x-ray and another COVID-19 swab. The doctor was quite sure he was infected with SARS-CoV-2, despite the previous negative test, but because his chest looked healthy, he was allowed to go home to once again wait for the results of his corona swab.

Within a week, his symptoms cleared, and he got a call saying that he had once again tested negative.

While much of the media coverage of testing for COVID-19 has been focused on the availability of tests, a different but important metric has been overlooked: their accuracy. The ability to test many people, especially essential workers and those with underlying conditions, is crucial to reducing both infection and mortality rates, but test results are only valuable if they’re trustworthy.

While both false positive and false negative results come with their own challenges, with this pandemic, false negatives are our main concern. A patient incorrectly diagnosed with COVID-19 will probably experience unnecessary anxiety and potentially accrue some costs associated with quarantining themselves but will be physically fine. On the flip side, a false negative result can put both the patient and everyone they interact with in danger. It can lead to treatment delays, increased rates of community transmission, and worse health outcomes for both the patient and anyone they expose to the virus.

The tests I’m writing about today are nucleic acid amplification tests that use PCR to essentially find, photocopy, and multiply the genetic material of the SARS-CoV-2 virus. These tests usually use swabs taken from a patient’s nose or throat but can use a variety of bodily fluids. You can read a great explanation of these tests here.

PCR-based tests are much more likely to provide false negative results than false positive ones. False positives in PCR are usually due to contamination, between samples or from a lab technician. False negatives, on the other hand, have a wide variety of causes: a swab of the nose or throat could happen to not pick any viral RNA up, even if a person is infected; RNA is not a very stable molecule and thus could break down in transit before the sample even arrives at the lab; an inexperienced health care provider could not push the swab deep enough and therefore not pick up any viral RNA. There are a lot of possibilities.

So How Big of an Issue Are False Positives and Negatives for COVID-19?

To understand why we don’t know, let me review just a bit of basic epidemiology.

As I mentioned, nucleic acid tests tend to suffer from more false negatives, fewer false positives. This means that while they tend to be highly specific, their sensitivity is lacking.

The sensitivity and specificity are usually reported for laboratory tests, to give us an idea of how well they work. Unfortunately, as researchers from the Mayo Clinic point out, these characteristics for PCR-based SARS-CoV-2 tests “have not been reported clearly or consistently to date.” As such, the fundamental characteristics of the tests we’re all relying on “are largely unknown.”

One of the biggest barriers to determining the true sensitivities and specificities of PCR tests for COVID-19 is that we don’t have any other “gold-standard” test to compare it to. If you consider that sensitivity is a measure of how many people with the disease test positive, it requires knowing how many of the patients you test truly have the disease. But if we knew how many patients we tested via PCR for COVID-19 had COVID-19, we wouldn’t be doing these tests.

Let me give you an example. This retrospective study from Wuhan, China, looked at 1,014 patients suspected of having COVID-19. All 1,014 patients had both a PCR-based test for SARS-CoV-2 and a chest CT scan (a special chest x-ray). The authors state that “with RT-PCR as a reference, the sensitivity of CT imaging for COVID-19 was 97%.” This means that a chest x-ray missed only 3 percent of COVID-19 cases. That’s pretty good, but we can only know a statistic like that because we have the PCR results to compare the CT results to.

Without a highly reliable, “gold standard” test to compare PCR COVID-19 tests to, we cannot know these tests’ true sensitivities or specificities. It’s also worth remembering that even if we did have such a standard, the sensitivity and specificity of a PCR test for SARS-CoV-2 will change based on the kind of sample taken and the skill of the person doing the swab. As I mentioned, while nose and throat swabs are commonly used to pick up some viral RNA, other bodily fluids can be used and may give different results. As researchers from the American Society for Microbiology point out, “It should not be assumed that each of these (e.g., nasopharyngeal swab specimen, sputum, bronchoalveolar lavage fluid) will have the same chance of detecting SARS–CoV-2; detection rates in each sample type vary from patient to patient and may change over the course of individual patients’ illnesses.”

To look at just how the detection rates for COVID-19 changes as the illness progressed, an analysis of 298 nose and throat swabs from thirty patients tested via PCR was done by researchers from the University of Oxford. They found that the sensitivity of PCR decreased with time since onset of symptoms. In other words, “the longer the time from the onset of symptoms until a suspected case is tested, the more likely a false-negative result.” You can see the model they generated below. 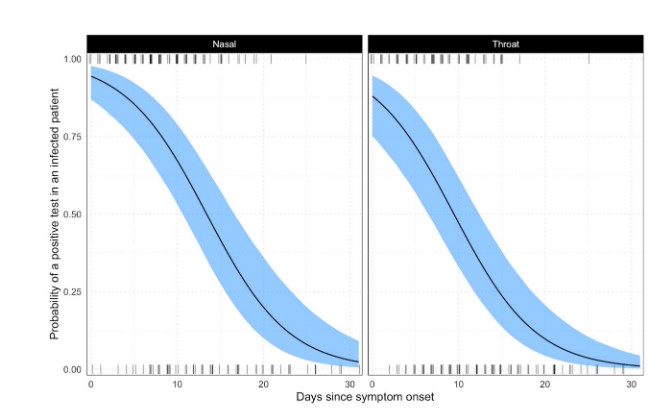 Even though we’re not sure of the absolute sensitivity of PCR tests for SARS-CoV-2, we do still know some things that can help health care professionals interpret negative results. We know that the sensitivity decreases as the disease progresses. Research also shows us that nasal swabs are generally more sensitive than throat swabs.

Importantly, even if we can’t quantify the chances of a false negative test result, we do know they’re happening. An analysis of 1,324 outpatients from Tongji Hospital eventually diagnosed with COVID-19 showed that more than half of them (52.2 percent) tested negative in their first nucleic acid test. One poignant case study saw a patient receive nine nucleic acid tests before finally testing positive for COVID-19.

Thankfully, the risks posed by false negative results aren’t being ignored by health officials. The World Health Organization states in their “Laboratory testing for coronavirus disease 2019 (COVID-19) in suspected human cases” guidelines that “One or more negative results do not rule out the possibility of COVID-19 virus infection.” However, a lack of guidelines beyond this leaves healthcare professionals with just their best judgement. Are two negative tests results enough to rule out COVID-19? What about three? What if they’re all taken late in the disease progression? Until the performance characteristics of diagnostic tests for COVID-19 are known, as these researchers state, “negative test results should be viewed cautiously.”

Where does that leave my boyfriend and me? Well, thankfully, we’ve now finished our mandatory quarantine period, so even if he did have undiagnosed COVID-19, he should no longer be contagious. Personally, I believe that, given how similar in type and timing his symptoms were to mine and our proximity to each other, he was infected with SARS-CoV-2. I think that his second negative test could have been due to the fact that it was taken more than two weeks after his symptoms began.

As for the first one? We may never know. But then again, with the development and implementation of serological—or antibody—tests, we may one day be able to test if he was ever infected with SARS-CoV-2. However, if you think those tests won’t also have issues with false positives and negatives, think again.

Ada McVean is a science writer and masters student living in Montreal, Quebec, Canada. She received her Bachelor of Science, with a double major in bio-organic chemistry, and gender, sexuality, feminist and social justice studies from McGill University in 2019.

Ada enjoys science communication because it allows her to unite two of her biggest passions: science and social justice. She has been working with the McGill Office for Science and Society since 2016 separating sense from nonsense and has been a freelance science writer since 2019. She is passionate about a wide variety of scientific topics, but particularly enjoys writing about veterinary medicine, gendered health issues and biases in science.

When not in the lab (or writing), Ada spends her time cooking, playing video games, and cleaning up after her 2 guinea pigs and 14-year old gecko.

But What Do I Know

“But What Do I Know” is an exploration of all things you’ve taken for granted. It aims to question what you’ve never thought to question and bust the myths you never even knew were myths. This column will try to entertain, educate, and most importantly, challenge you. If these articles make you go, “huh,” then they’re doing their job!

Other Articles from But What Do I Know