In the latter nineteenth and early twentieth centuries, alleged cures for “female weakness” were among the nostrums marketed by quacks. Apparently these were sold with the realization that women represented a lucrative special market. Among the most successful of such marketers was a Buffalo
physician who became known as “The Prince of Quacks” (Hirsch 2004).

As well, the La Franco Medical Company of Philadelphia sold “Female Pills No. 2”; Margaret M. Livingston, MD, of Chicago offered a variety of products, including “Dr. Livingston’s Medicinal Tampons”; and the Phen-ix Chemical Company sold “Stargrass Compound—Nature’s tonic for women,” among other products. The American Medical Association regarded all of these as quackery (Cramp 1921, II: 160–182).

One of the most famous merchants of quack medicine for women was Lydia E. Pinkham (1819–1893) who marketed “Lydia E. Pinkham’s Vegetable Compound.” Among its outrageous claims was that it was “A Sure Cure” for “Falling of the Womb” (Prolapsus uteri) and, indeed, “All Female Weaknesses,” including irregular menstruation and even labor pains. In fact the product contained only a minor amount of vegetable extracts in water but was 18 percent alcohol (Cramp 1921, II: 160–163).

The man who became one of the greatest sellers of nostrums in America was Buffalo’s Ray Vaughn Pierce (1840–1914).

Of course, Pierce had something special for women—or rather “Weak Women.” Now, he was not saying women were weak per se, indeed enlisting Anna “Annie” Edson Taylor, the first daredevil to survive going over Niagara Falls in a barrel, for some ads.2 Rather, when strong women became weak through illnesses suffered by women, the good doctor had just the remedy—one second only to his tonic, Golden Medical Discovery, as a cure-all.

Dr. Pierce offered women a product that—like his other concoctions—was in keeping with the “eclectic” school of medicine from which he graduated. This advocated replacing “noxious medicines” with “more effective agents, derived exclusively from the vegetable kingdom” (Pierce 1888, 294–295)—in a word, botanicals (drugs from herbs, bark, etc.). He called his medicine for females “Dr. Pierce’s Favorite Prescription.”

In his book, Pierce (1888, 342, 346, 355) described his preparation as “a tonic nervine” that both “quiets nervous irritation” and “strengthens the enfeebled nervous system, restoring it to healthful vigor.” Moreover, “In all diseases involving the female reproductive organs, with which there is usually associated an irritable condition of the nervous system, it is unsurpassed as a remedy.” In addition, it was “a uterine and general tonic of great excellence,” as well as “an efficient remedy in cases requiring a medicine to regulate the menstrual function.” Finally, Pierce claimed expansively, “In all cases of debility, the Favorite Prescription tranquilizes the nerves, tones up the organs and increases their vigor, and strengthens the system.”

The label of a bottle in my collection reads in full: “Dr. Pierce’s Favorite Prescription For the Relief of The Many Weaknesses and Complaints Peculiar to Females, Manufactured at the Chemical Laboratory of World’s Dispensary Medical Association, Buffalo, N.Y. Contains 81/2 Ozs. Trade-Mark Registered in U.S. Pat. Office, Dec. 11th, 1908. Mdse. 59.” No ingredients are listed. (See Figure 1.)

However, a notebook in possession of Dr. Pierce’s grandson names the ingredients of some Pierce products, including Favorite Prescription for which it lists berberis, valerian, blue cohosh, black cohosh, and viburnum (Hirsch 2004, 15). These are still found in herbal guides, recommended for some of the same conditions that Dr. Pierce named. For example, viburnum (black haw root) is reportedly an antispasmodic, used for “threatened miscarriage,” while valerian root is found in some over-the-counter sleep aids, and black cohosh is a relaxant said to relieve menstrual cramps (Balch 2002, 138–139; Naturopathic 1995, 91, 92, 124). Whatever value the ingredients might have if properly prescribed, does not argue for the wisdom of dumping them together and urging them on persons whom the physician has not seen, who may in fact be harmed by the product.

Pierce was accused of worse. Collier’s called him a “quack,” and Ladies Home Journal went even farther—too far as it turned out. The Journal article, penned by its celebrated editor Edward Bok, alleged that Dr. Pierce’s Favorite Prescription contained not only alcohol but also opium and digitalis. In fact it contained none of these, as laboratory tests soon showed. The Journal issued a retraction and apologized. However, Dr. Pierce felt entitled to more and, in agreement, a court awarded him $16,000 in a libel judgment. Pierce also sued Collier’s, but—after examining the varied definitions of the word quack—the court rejected Pierce’s claim (Hirsch 2004, 14).

In his heyday, Dr. R.V. Pierce was, notes one historical writer, “Buffalo’s most famous doctor,” one “whose name and bearded countenance were familiar to people all over the world” (Hirsch 2004, 10). Today, however, the same writer observes of Pierce: “He’s disappeared into the mist. Nobody’s really ever heard of him” (Hirsch 2009). 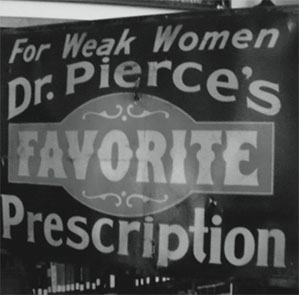 Of course, historians, skeptics, and collectors, among others, learn about Dr. Pierce, and his legacy remains sizeable. In collecting Dr. Pierce items, I am fortunate to live in the area where he flourished, where such artifacts may be especially findable. Looking just at Dr. Pierce’s Favorite Prescription, I have been able to purchase several specific collectibles as I’ve made my way to antique shops and centers, mostly within a one-hundred-mile radius (again, see Figure 1). Also, dealers who know of my interest sometimes inform me of a newly discovered rare item. For example, Peter Jablonski, president of the Greater Buffalo Bottle Collectors Association (GBBCA—of which I am a member), obtained for me the Pierce sign—addressed to “Weak Women”—shown in Figure 2.

While returning from an investigation in LeRoy, New York (Nickell 2012), along Route 5, I passed an old barn with faint advertising lettering. I made a U-turn and parked at the site, where I took photographs (see Figure 3) of what clearly reads, “FAVORITE PRESCRIPTION.” Given the location and the fact that the words were a trademark of Dr. Pierce, it is clear that this was one of several Pierce barn signs across the United States (“Looking” 2012), and now—so far as we can yet determine—the only remaining one known in New York state. 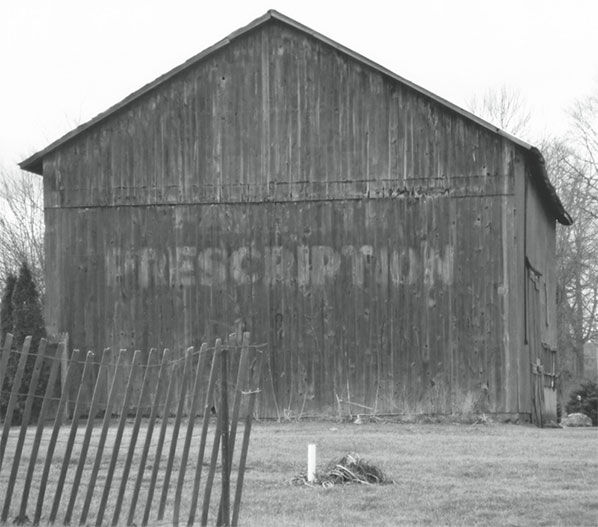 I had wondered why the “DR. PIERCE’S”
portion was no longer legible. On a return visit, when my wife Diana used her GPS to obtain location coordinates,3 I met the property owner. He told me that a shed had once been built onto the end of the barn, where the legible lettering now is, which obviously protected it from the many years of weathering that the other portion was subjected to.

Such discoveries give hope that other “time capsules” will yield their treasures, giving us insights into medical science’s past that can help us plot a more informed future course.

I appreciate the help of the CFI Libraries staff—notably Tim Binga, director, who has done extensive work on my Pierce collection, and Lisa Nolan, former librarian—as well as my wife Diana Harris.

2. This is strongly suggested by some rare photos in the possession of my friend, photo expert and collector Rob McElroy, showing a woman accompanied by a barrel, believed to be Annie Taylor, holding a Pierce sign (Neville 2012).