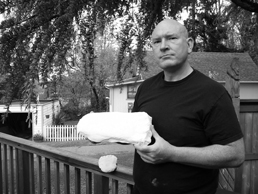 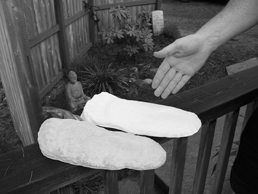 Figure 1. Researcher Matt Crowley compares an alleged Bigfoot cast to a test cast he made. Photos by Matt Crowley

One star of the Bigfoot community over the past decade has been latent-fingerprint examiner Jimmy Chilcutt.1 A number of Sasquatch casts have been identified with what appears to be a series of dermal ridges and valleys, what on the fingers we call fingerprints. In numerous television appearances, Chilcutt has presented himself as an expert on both human and primate fingerprints. On a November 24, 1999, Salt Lake City television show, he pointed to what he calls the “pattern flow” of the dermal ridges on a Bigfoot cast, explaining they were not human nor primate but from “a species in itself.” Furthermore, he says, “whichever you call it-Bigfoot or Sasquatch-from [this dermal-ridge] evidence, I can tell [there is an unknown] animal in the Pacific Northwest.”

In the documentary video Sasquatch: Legend Meets Science, Chilcutt is prominently featured and is even more forceful. “I’ve come to the following solid conclusions,” he says. “Number one: there is a great ape living in North America, and number two: the friction ridges of this great ape are not human or of a known species. This conclusion may come as a shock to some people, but I stake my reputation on it.”2

To my knowledge, other than a posting on the Internet,3 Chilcutt has published no papers on his findings,4 nor has anyone outside the Bigfoot community examined his claims or theories. Reporting by other Bigfoot enthusiasts, including Christopher Murphy, provides only cursory coverage of Chilcutt’s work. From what I have been able to ascertain, Chilcutt has identified three Bigfoot casts as exhibiting dermal ridges with the particular non-human and non-primate characteristics he alone has identified. The three specimens are known as Wrinkle Foot, Onion Mountain, and the Elkins cast. Two of these three tracks are problematic: the imprint from which the Elkins cast was made came from Georgia, an unlikely spot to find Bigfoot,5 and the Wrinkle Foot cast is one of many tracks “discovered” by the late D. Paul Freeman.

To appreciate Freeman’s involvement with the Wrinkle Foot print, some background information is required. Freeman came to prominence within the Bigfoot community in 1982, when he allegedly saw a Sasquatch in the Mill Creek Watershed not far from Walla Walla, Washington. Casts were made of footprints near his sighting, and when examined, they revealed tiny dermal ridges and valleys in some parts of the imprint. Later revelations about Freeman and the tracks provided overwhelming evidence that the impressions were hoaxed. Longtime Bigfoot hunter Rene Dahinden called Freeman’s Mill Creek tracks “100 percent fakes, absolutely fakes.” Freeman later produced more than one set of Sasquatch hairs that turned out to be artificial fibers.6

Both Freeman’s Wrinkle Foot and the Georgia imprint came after the Mill Creek tracks, when dermal ridges became a major issue. Even Chilcutt recognized the possibility of faking dermal ridges (at least those looking like those of a human fingerprint), for in his television interview, he dismisses as worthless a track (looking suspiciously like one of the Mill Creek tracks), saying the “casting had been enhanced manually with a human fingerprint.”

Because of the dubious authenticity of the two other tracks, the third footprint, know as the Onion Mountain cast, is of primary importance. Found by veteran Bigfoot researcher John Green in August 1967, it predates the first understanding of the dermal ridge topic by decades and presumably represents an historic example of the phenomena. 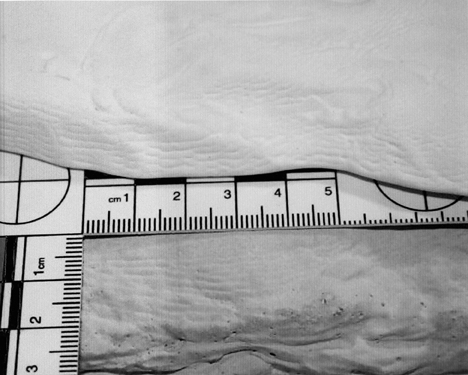 Recently, a Seattle man, Matt Crowley, obtained a copy of the Onion Mountain cast.7 Crowley, a former pharmacist who now makes a living as an artist, conceived a series of experiments to try and duplicate the circumstances of the Onion Mountain cast. Working with painstaking detail, he tried to recreate the same hot, dry conditions of the original site. The result has been a series of test casts, which (as a product of the casting process) display virtually identical dermal-ridge-type surface characteristics (see figure 2). Crowley presented his findings at three Bigfoot conferences in 2005. The response from the Bigfoot community, so far, has been surprisingly positive.

The Onion Mountain cast displays three distinct patterns. The most obvious of the three is a series of what do look like dermal ridges running along the outside of the track. These are the ridges Chilcutt is referring to when he identifies for the television camera his “flow pattern.” Crowley’s experiments clearly show that Chilcutt’s “pattern” is an artifact of the casting process, appearing in all of the tests. The other two details of the Onion Mountain print are an apparent skin crease across the center of the print (Crowley calls it a curved furrow) and more lines similar to human dermal ridges, but not characteristic of the “flow pattern.” Amazingly we can see these other dermal patterns, including an almost identical curved furrow in Crowley’s experimental casts-again, all artifacts of the process. So compelling are the Crowley experiments that Daniel Perez, who chronicles the search for Sasquatch in his Bigfoot Times newsletter, named Crowley his “Bigfooter of the Year.”

Even Jeff Meldrum, the chief academic spokesmen for Sasquatch, has grudgingly conceded this piece of evidence for Bigfoot is lost. According to the December 2005 Bigfoot Times, Meldrum is quoted as saying, “However, I caution others not to extend the results of [Crowley’s] experiments beyond the conditions he has investigated, which apply to the Onion Mountain track site.” This is unnecessary, as Crowley has always maintained the Onion Mountain cast was a specific case and the results were the product of this particular set of conditions. But Meldrum is wrong. The Crowley experiments have a larger message: that seemingly impressive “evidence” for the Sasquatch monster can turn out to be no more than one man fooling himself. This is a lesson that is not confined to this specific track.

Obviously, Bigfoot enthusiasts need to examine claims carefully. When I spoke with Chilcutt by phone, he mirrored this sentiment, saying, “Matt has shown artifacts can be created, at least under laboratory conditions, and field researchers need to take precautions.”

Although Chilcutt admits Crowley’s work duplicated the friction ridges on the Onion Mountain cast, he maintains that the impression is of the foot of a real animal. He explains, “the Walla Walla [Wrinkle Foot] and Elkins casts display similar dermals to Onion Mountain.” Even the flow pattern appears in the Elkins impression, “although it is hard to see.” Besides, Chilcutt informed me, “John Green told me he saw the dermal ridges in the actual [Onion Mountain] track.”

“Not true,” replies Crowley. “I contacted John Green and specifically asked about dermals in the original footprint. I e-mailed him the question and he confirmed by return e-mail he did not see friction ridges in the Onion Mountain track before a cast was made.”8

Crowley, who describes himself as a Bigfoot agnostic, has shown how one can present negative findings to a Sasquatch conclave without alienating the audience. He has maintained a nonaggressive, focused approach, and many within the Bigfoot community have responded warmly. (Skeptics should learn from his example.)

For this observer of the people who search for Sasquatch, the general acceptance of Crowley’s experiments is a positive sign. I’m hopeful others will follow his lead in close examination of Sasquatch “evidence.” Perhaps Bigfooters will even begin to conduct experiments on tracks and other tangible items they believe to be from the Sasquatch monster. That is, if Crowley doesn’t get to them first.