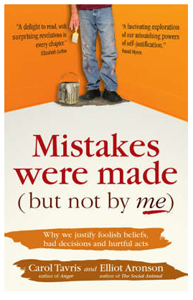 The question of whether or not psychology is a science is not new. It’s true that some aspects of psychotherapies, such as the psychoanalytic notion of repressed memory, have little or no basis in science. In their book Mistakes Were Made (But Not By Me), social psychologists Carol Tavris and Elliot Aronson showed how mental-health professionals wrongly diagnosed their patients with no prior memory of sexual abuse as having been molested. These therapists believed that hypnosis would recover the memory that had been repressed due to the trauma. In fact, hypnosis can create false memories. In addition, the failure to report traumatic experiences doesn’t mean the memory was repressed. As psychologists and authors of 50 Great Myths of Popular Psychology note, even in those cases memory loss can be explained in terms of ordinary forgetting rather than repression. More critically, the authors explain that research actually shows that most people remember such traumatic experiences quite well in the form of disturbing flashbacks.

However, when science has been applied to the study of cognition and behavior, scientists have uncovered interesting phenomena through very clever experiments. This year, two fascinating classic psychological experiments have been portrayed in movies: Philip Zimbardo’s Stanford prison experiment and Stanley Milgram’s shock experiment. In this column, I’ll discuss other interesting experiments in psychology.

The Morality of Babies

In one fascinating experiment conducted by developmental psychologists Karen Wynn, Paul Bloom, and colleagues at the Infant Cognition Center at Yale University, a baby watches a show with three puppet characters. The puppet in the middle has a ball and rolls to the puppet on the right, who rolls the ball back. Then, the ball is rolled for the puppet on the left who, instead of turning it back, runs away with it. End of the show. Then a researcher who isn’t aware of each puppet’s role in the play asks which one the baby prefers between the “nice” one (the one who turned the ball back) and “naughty” one (who ran away with the ball). In fact, developmental psychologists have conducted similar experiments with the same underlying aim: to verify if babies favor the helpful or the unhelpful “characters” over the others. The results have been consistent: about 80 percent of babies favor the good guy over the bad one. In a similar version of the experiment, the same show described previously was exhibited to each of the babies. In the end, the nice and bad puppets were put in front of the baby and a treat was placed in front of each puppet. In this version, the experimenter invited the baby to take one of the treats away. As expected from previous results, most babies in this experiment took the treat away from the bad puppet. More remarkable, as Paul Bloom says in his book Just Babies, the one-year-old baby “leaned over and smacked this puppet on the head”!

According to Paul Bloom, these experiments have shown that some aspects of morality come naturally to us, while others do not. What he proposes is that “certain moral foundations are not acquired to learning. They do not come from the mother’s knee, or from school or church; they are instead the products of biological evolution.” Just Babies is an excellent book that summarizes this and other studies psychologists have done with babies and children (Hamlin et al. 2007; 2011).

Psychologists Felix Warneken and Michael Tomasello conducted a series of experiments where they presented eighteen-month-old human infants ten different situations in which an adult was having difficulties achieving a goal (Warneken and Tomasello 2006). Helping someone solve a problem is an interesting cognitive phenomenon because, in order to do so, one must know something about the goal as well as its current obstacles. The results of the experiment showed that infants helped humans in different kinds of situations, such as by handing several out-of-reach objects to the experimenter, completing the experimenter’s stacking of books after his failed attempt, and opening the door of a cabinet when the experimenter’s hands were full. It’s remarkable that in almost all cases the infants helped immediately—they helped before the experimenter looked to them or verbalized his problem. Moreover, they helped without receiving any benefits. Warneken, Tomasello, and colleagues have also conducted similar tests with chimpanzees, in which all of them reliably retrieved objects for humans (Warneken and Tomasello 2006; 2009).

Primatologist Frans de Waal has studied moral behaviors in nonhuman primates. As de Waal explained in his TED Talk, for decades it was assumed that only humans could care about the welfare of others. However, research has shown this is wrong. In an experiment, two chimpanzees were put in separate but proximate cages. In one of the cages, there is a basket with several tokens. There are two types of tokens identified by color. Only one of the chimps selects a token and delivers it to the researcher. The token-selector chimp always receives a food award. However, according to the token chosen, the other chimp does or doesn’t receive food. If the chimp chooses the “selfish” token, only she receives the food reward. If the chimp chooses the “prosocial” token, both of them receive food. It’s remarkable that, if the non-selector chimp applies some pressure (by spitting water for example), the selector chimp decreases her selection for the prosocial token, punishing the other monkey for bad behavior (Brosnan and de Waal 2003).

In another experiment, de Waal and his colleagues put two capuchin monkeys side by side in different cages. The monkeys were asked to do a simple task: to give back a small rock they received from a researcher. After they did it, they received a food reward. When the first monkey completed the task, she received a slice of cucumber. The other monkey also performed the same task but received a grape. The remarkable behavior happened when the first monkey performed that same task again and continued to receive the cucumber instead of grape that the other monkey had received. Since capuchin monkeys often prefer grape to cucumber, the monkey feeling the injustice threw the cucumber on the researcher (Horner et al. 2011)!

Evolutionary anthropologist Brian Hare, developmental psychologist Michael Toma­sello, and other scientists have shown in several experiments that dogs are very good at understanding human cues such as gazing or pointing. In one experiment, a piece of food was hidden without the dog’s awareness in one of two opaque cups. Then the experimenter points to the correct cup and lets the dog choose a cup. Dogs were able to locate the hidden food above the levels of chance. Experiments of this kind have also been done with chimpanzees, which have performed worse than dogs. In all of these tests, scientists have controlled for other possible cues that dogs were using, such as smell of foods or even attraction to motion. The dogs also were able to locate food using cues they never had seen before, such as a researcher pointing with a foot. They also identified the right cup even when the experimenter walked toward the other cup while pointing in the right direction (Hare and Tomasello 2005).

Scientists wondered why dogs have these remarkable skills, and several hypotheses were developed. First, dogs could learn to read human gestures as they grow up along with humans. However, tests have shown that even nine-week-old puppies performed as well as adult dogs. In addition litter-reared puppies, which have little human contact, performed just as well as puppies adopted by humans. Another possible explanation is that this ability was inherited from dogs’ ancestry. This also turned out to be wrong because wolves performed worse than dogs in understanding human communication intention (Hare and Tomasello 2005).

So, the last hypothesis remained: Did these skills evolve during domestication? The likely answer came from a big and brilliant experiment that started fifty-five years ago and continues today. In 1959, geneticist Dmitry Belyaev was interested in domestication and performed an experiment with two groups of foxes. In the control group, foxes were bred randomly. In the other group, the experimental line, a human tried to touch the foxes when they were seven months old. The fox kits that were friendly toward the human were bred with kits that showed the same behavior; fox kits that showed fear or even aggression toward humans were not bred. As Brian Hare and Vanessa Woods explain in their book The Genius of Dogs, after forty-five generations when Hare visited Belyaev’s creatures, the results were remarkable: some foxes (in the experimental group) had floppy ears, others had curled tails. In addition, the “experimental” foxes wagged their tails to him as he walked through their rooms. More critically, experimental foxes were much better at reading human gestures than the control group foxes, which performed as badly as wolves or chimpanzees (Hare et al. 2005). Hare and Woods are clear in their book about the results of these experiments: “Belyaev’s experiment had changed the foxes’ ability to read human gestures as a direct result of experimental domestication. Domestication, selecting the friendliest foxes for breeding, had caused cognitive evolution.”