In 1774 a “visionary” named Ann Lee—as charismatic as she was un­educated—sailed from Manchester, England, to New York to spread her new faith. In time
“Mother Ann’s” United Society of Believers in Christ’s Second Coming would found nineteen utopian communal villages. Known as “Shakers”
because of their ecstatic shaking and trembling during worship, the adherents of this faith practiced pacifism, equality of the sexes, and celibacy. The
latter contributed to their decline in the late nineteenth century, although they sought to ex­pand through making conversions and adopting orphans.

The Shaker motto was “Hands to work, and hearts to God.” Their craftwork em­bodying Shaker design was renowned for its aesthetic simplicity. They sold to
the outside world furniture, brooms, nesting boxes, and myriad other craft items and marketed herbs and other goods.

In Kentucky in 1805, the Shakers founded a farming community they called Pleasant Hill. Spanning some 3,000 acres of largely rolling land, it is located
about twenty-five miles southwest of Lexington. It consists now of thirty-three restored buildings where Shaker-costumed interpreters demonstrate crafts,
give tours, and perform authentic Shaker songs and dance in the Meeting House. (See Figure 1.) 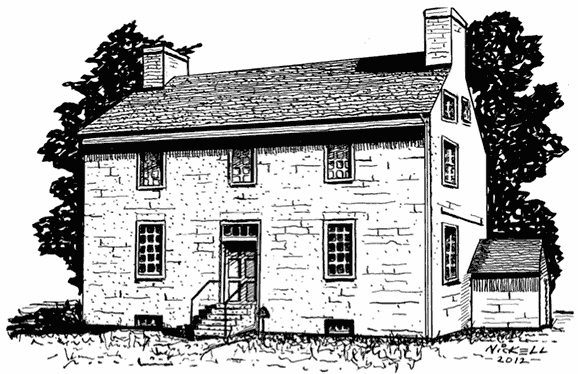 Figure 1. The “haunted” Farm Deacon’s Shop at Pleasant Hill was built in 1809 and remains the oldest permanent structure there. (Pen and ink drawing by Joe Nickell.)

Thomas Freese, who became one of the Pleasant Hill Singers in 1996, has collected accounts of alleged spirit encounters there, publishing them in his book,
Shaker Ghost Stories from Pleasant Hill, Kentucky (Freese 2005). We met when we had tables next to each other at the Kentucky Book Fair in Frankfort. I
read my autographed copy of the book with the interest of one who has himself often toured, lectured, and re­searched at Shakertown at Pleasant Hill. (I
even prowled the outlying grounds looking for the possible site of a reputed paper mill, only to finally determine the Shakers never had such an enterprise
there.)

Freese acknowledges (2005, 3) that “a number of the sightings of Shaker spirits were assumed to be encounters with Pleasant Hill employees who were dressed
in Shaker style clothing.” (This is like re-enactment soldiers being mistaken for ghosts at Gettysburg and other historic battlefields [Nickell 2012]).
Other apparitions are at­tributable to the percipient being tired or in a daydream state or the like, in which imagery may well up from the unconscious and
be superimposed on the visual scene (Nickell 2001).

An overnight guest had a rather common ghostly experience. She awoke at about 3 AM feeling a “heaviness” and seeing a “series of faces” that was, she said,
“almost as if I was watching an old movie reel” (Freese 2005, 26–27). She is giving an excellent description of a common “waking dream” that occurs in the
twilight between being fully asleep and awake. The heavy feeling is due to the body being still in the sleep mode, and the hallucinatory imagery is common
to the experience (Nickell 1995, 41, 214).

A former employee who worked night security at Pleasant Hill recalled his first evening there: “I was in the Trustee’s Office and I went up to check on one
of the security locks. When I went up the spiral stairs and reached the top floor, I felt something breathing down the back of my neck. But there wasn’t
anyone there.” However, the man concedes that while the sensation may have been “a ghost or the boogie man,” it could also be attributed to “first-night
jitters” (Freese 2005, 19).

Indeed, a maintenance worker acknowledges that many of the sounds made by old buildings have nothing to do with spirits of the dead. “Pipes will moan,” he
says. “I’ve heard that.” And creaking sounds can result from an old building’s settling, from woodwork that yields knocking and popping noises due to
temperature changes, and from various other causes. This could well explain the report of a man at work below the floorboards of a shop building who heard
“bumps and stomping” (Freese 2005, 10, 19). It could also account for “footsteps” heard here and there (Freese 2005, 9, 20, 45).

There could be similar mundane causes for other spooky happenings: a rocking chair moving by itself (possibly caused by people walking on a rickety floor),
rattling pots and pans coupled with an unaccountably open back door (due to a forceful wind), during a storm the repeated sound of something falling
(thought to have been possibly “a loose shutter,” but the earwitness was too fearful to investigate), and other incidents (attributable to overactive
imaginations or even the outright pranks of others) (Freese 2005, 13, 23, 25, 74).

Sheer superstition can cause someone to imagine the supernatural from the merest coincidence. For instance, when some employees visited the Shakers’ secret
worship site that was being excavated by archaeologists, they were greeted with an “unusual sleet storm” that drove them to their cars then “suddenly
stopped.” Freese (2005, 106) ventures, “Perhaps the Shaker spirits were restless and had not approved of the excavation?” Yet no unusual storm plagued the
actual archaeologists before or after. In any case, to suppose that spirits of the dead were capable of causing a sleet storm is an exercise in
magical—superstitious—thinking.

That the Shakers themselves engaged in trancelike behavior, “speaking in tongues,” and channeling “prophecy” has obviously set the stage for impressionable
people to expect mystical happenings at Pleasant Hill and to interpret almost any out-of-the-ordinary occurrence accordingly. But are there really spirits
of the dead at the site, or are they just expressions of our own hopes and fears?