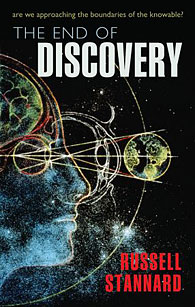 In 1844, the idea that we would ever be able to discover what distant stars are made of was so unthinkable that philosopher Auguste Comte cited it as an archetypal example of an unsolvable question. He was wrong. A mere three years after Comte’s death, scientists figured out how to read a star’s light spectrum to determine its chemical composition: each dark line in the spectrum represents light that was absorbed by a particular kind of atom or molecule.

It’s easy to look like a fool to future generations when one makes predictions, especially predictions about what will “never” happen. But even if we can’t speak with 100 percent certainty, are there any questions that at least seem to have a higher-than-usual chance of remaining unsolved forever? Particle physicist Russell Stannard thinks so. In The End of Discovery, he lists the scientific questions he fears may prove unanswerable and explains why each made the list. The questions are mostly from physics and cosmology, and they include some of the most fundamental issues about the nature of the universe. What happened before the big bang? Is there other intelligent life in the universe? What is space? Why are the laws of physics the way they are?

It’s not always clear why all of the book’s “potentially unsolvable” questions deserve that label any more than other problems that once baffled scientists. Take Stannard’s example of dark matter. Scientists believe it exists, despite never having observed it directly, because they have discovered gravitational forces that can’t be explained by the observable matter in the universe. It’s true that, as Stannard explains, we don’t yet have any idea what dark matter actually is. But there also don’t seem to be any obvious obstacles in the way of us solving that problem. So it’s not clear why we should consider ourselves to be in a more hopeless situation with respect to dark matter than earlier scientists were with respect to, say, the nature of light.

But for many of the questions Stannard raises, there are real obstacles to finding a solution. These fall roughly into one of two categories: obstacles to getting the evidence we need and obstacles to understanding the evidence we have. The former is a particular problem for investigations of the early universe, which is clouded by a “radiation fog” because its conditions were too hot for atoms to form. And some of the leading theories explaining quantum mechanics posit the existence of other, inaccessible universes. What hope do we have of testing those theories empirically?

Even if the evidence is “out there” and could be gathered in principle, it may be impossible to gather it in practice. Every time physicists have succeeded in smashing particles together at a significantly higher energy level—for example, by building bigger particle colliders—we have reaped new discoveries. But there are practical limits to the size of collider we can build, and some of our most promising theories may not be testable within those limits. For example, our equations predict that gravity, the electromagnetic force, and the weak and strong nuclear forces would all converge to the same strength at an energy level of approximately 1015 billion electron volts, revealing themselves as manifestations of a single force. Yet even the largest particle collider ever built, the Large Hadron Collider, can’t reach much higher than 104 billion electron volts. That’s no guarantee that we won’t hit upon an alternate technological strategy someday, but neither can we assume that every technological challenge will be surmountable just because we want it to be. As Stannard rhetorically asks, “Why should all the indispensible experimental data for formulating a final complete theory happen to match what we humans are able to achieve in practical and economic terms?”

But our own brains may prove our biggest handicap in the quest for scientific understanding. As the biologist J.B.S. Haldane said, the universe might be “not only queerer than we suppose, but queerer than we can suppose.” If a monkey can’t be made to understand calculus, isn’t it plausible that there might be features of the universe, or mathematics necessary to understand those features, that are as far beyond our ken as calculus is beyond a monkey’s? We’re not at that point yet, but even today the math involved in string theory is a challenge for even the brightest scientists.

Technology could amend the situation to some degree, though Stannard doesn’t discuss that possibility in the book. Computers have already enabled us to perform calculations that are many orders of magnitude too complicated for us to do by hand. And artificial intelligence algorithms can pick up on patterns that are too subtle for a human brain to detect, involving interactions between hundreds or thousands of different variables. There’s even a recent example of a computer algorithm uncovering a law of motion.

However, while technology may be able to help us calculate answers, it’s unlikely to be able to help us understand them. Our brains didn’t evolve to help us understand quantum mechanics; they evolved to help our ancestors survive in the environment in which they happened to live. So, because it was useful to our ancestors, we developed an intuitive grasp of the physics of our day-to-day lives, such as the fact that a dropped object falls to the ground and that solid objects can’t pass through each other. But those generalities are true only for beings of roughly our size that inhabit worlds roughly like ours. If we had evolved in a much smaller world, perhaps we would be able to perceive that solid objects are mostly made up of empty space; if we had evolved to move much faster, perhaps we would have an intuitive grasp of the relativistic effects that warp time and space at high speeds. As it is, those scientific discoveries are hard to wrap our minds around.

And many of the scientific mysteries in The End of Discovery suffer from this problem. Even if we are able to figure out what is the case, we can’t understand how it can be the case. What does it mean for time to “begin” at the big bang? How is it possible for something to be both a wave and a particle simultaneously? Our concepts start to break down when we venture too far from the world we’re used to. One response to this conceptual impasse is to take an instrumentalist approach to science, focusing simply on finding theories that make accurate empirical predictions without trying to interpret them in a way that makes sense to us. This approach, which many physicists take with quantum mechanics, is summed up in the slogan “Shut up and calculate!” Unsatisfying, perhaps, but for some problems we may not have other options.

Stannard reassures us that he’s not anti-science and would be delighted if it turns out that all of these scientific mysteries are solvable after all. Nevertheless, there is something odd about his stated motivations for writing The End of Discovery: “[This book] is to be seen as a call to exercise a measure of humility,” he says in the introduction. “The claim is made that science is the only route to knowledge, and that ultimately it will bring us a complete understanding of everything.” Wait a minute—it’s one thing to say that science may not be able to give us all the knowledge we want about the universe, but it’s another thing altogether to suggest that there are other routes to that knowledge. Stannard doesn’t elaborate on what those other routes are, and it wouldn’t be fair to put words in his mouth. But it’s at the very least an unfortunate choice of phrasing, because it echoes a common but fallacious argument for theism: science doesn’t have answers for everything, therefore we need religion to give us answers.

Stannard also undercuts his pro-science protestations when he explains that in addition to promoting an appreciation for science’s achievements, his book is also intended to “engender an even greater sense of awe when faced with the mystery of existence.” Romanticizing the unknown has been a human tendency throughout our history, but it isn’t exactly a helpful one if we want to reduce the size of that unknown. Stannard may be right that there are mysteries about our universe that we’ll never solve. But whatever mysteries we do manage to solve, it won’t be thanks to us remaining in awe of them.

Julia Galef is a New York-based writer and public speaker specializing in science, rationality, and design. She serves on the board of directors of the New York City Skeptics (http://nycskeptics.org/), co-hosts their official podcast Rationally Speaking (www.rationallyspeakingpodcast.org/), and co-writes its blog (www.rationallyspeaking.org/) along with philosopher of science Massimo Pigliucci. She received her BA in statistics from Columbia in 2005.

Other Articles from Review

Scamming the Public by Direct Mail