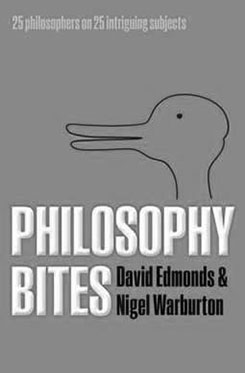 The cover of Philosophy Bites: 25 Philosophers on 25 Intriguing Subjects, by David Edmonds and Nigel Warburton, sports a simple line drawing of a duck. Or does it? Mentally re-orient the picture, and the duck’s bill becomes a rabbit’s ears. The classic illusion makes a fitting mascot for philosophy, a field in the business not of collecting new facts about the world but of figuring out how to look at the facts one already has.

The reader can perform a similar mental morph on the book itself, which is a collection of twenty-five interviews with professional philosophers, adapted from the popular Philosophy Bites podcast (www.philosophybites.com/). Look at it one way, and it’s an introduction to a broad range of topics in the fields of ethics, aesthetics, religion, politics, philosophy of mind, and metaphysics. Shift your focus from the answers to the questions themselves, and it becomes another book altogether: a practical manual on how to talk to philosophers.

There’s no shortage of potential pitfalls in philosophical discussions, but interviewer Nigel Warburton leads by example in avoiding many of them. The first step: never hesitate to ask, “What do you mean by that word?” It’s a simple rule, yet its perennial neglect has resulted in countless intractable arguments between people who never realize they’re talking about different things. So Warburton wisely kicks off each interview by inviting his guest to define what she or he means by the word minority or natural or rights or whatever that particular philosopher specializes in.

Sometimes the answers Warburton gets are surprisingly thought-provoking. It may seem odd at first to hear bioethicist Peter Singer define person as “someone who is aware of their own existence over time,” but upon reflection it seems even odder that our language doesn’t have a separate word for this concept. Why do we use the words person and human interchangeably? There are humans who are not self-aware, such as infants, and there are non-humans who are at least somewhat self-aware, such as chimpanzees. Singer’s implication is that making this distinction in our language allows us to make a corresponding distinction in our ethics: when deciding what rights to bestow on other beings, should we be considering their species or their personhood?

While good definitions can clarify our thinking, bad ones make it only foggier. Theologian Don Cupitt, for example, says he does not consider himself an atheist because he defines the word god to mean “a goal of life” or a “symbol of perfection.” One is tempted to ask, “Why? What is the point of redefining god so that it must exist simply by definition?” Warburton is a little too polite to ask these questions, unfortunately, but it’s a prime example of the kind of verbal sleight-of-hand that philosophy should ideally be debunking, not promoting.

The fog hangs heavily around several other chapters as well. Asked to define infinity, metaphysician Adrian Moore replies that it is undefinable because “if you’re trying to define the concept, then what you’re trying to do is pin it down in some way, circumscribe it, give it parameters,” he says, which in his view contradicts the concept’s very nature. This evidently strikes Moore as appealingly paradoxical, but it leaves him in the unfortunate position of being unable to say anything more coherent about his topic than “the infinite embraces everything.”

This sort of nebulousness is another hazard of philosophy, but Warburton generally succeeds in bringing the conversations back to Earth by following a second rule: use examples. Test-driving his guests’ abstract arguments on specific cases not only keeps the questions well-defined but also makes us aware of why the answers might be important. In order to address the age-old issue of whether everything people value can be viewed as a form of pleasure, Alex Neill examines our reactions to a tragedy like King Lear. Similarly, the abstract question of what constitute “natural” human limitations becomes tractable when Michael Sandel discusses why it doesn’t ruin the satisfaction of watching a marathon if we allow the runners to wear shoes, but it does ruin a baseball game if we allow the players to take steroids.

Philosophy Bites could have had an even sharper bite if Warburton had more consistently applied another guideline for discussing philosophy: make sure your questions have answers. Sometimes they don’t, which should be a tip-off that they are poorly formed questions to begin with. The interview with Timothy Williamson on vagueness is a particularly frustrating case in point. Williamson raises examples of cases in which it’s not clear if a particular word applies: is this color red or not red? Is that man tall or not tall? He agrees the answers depend on the cutoff point, but he still thinks there is some objectively right answer in the borderline cases, albeit an unknowable one. “Yes, even if we could be bothered to count the exact number of hairs on Tony Blair’s head we still wouldn’t necessarily know whether he was bald or not. But either he is or he isn’t,” Williamson argues.

That kind of hair-splitting helps neither one’s understanding of the world nor one’s opinion of philosophy. Especially when contrasted with the examples of genuinely good philosophy sprinkled throughout the book—examples in which careful questioning of our language yields new insight—it’s clear that once we know how many strands of hair are on a man’s head, we learn nothing by inquiring whether he is really bald or not. It’s like looking at the cover of Philosophy Bites and wondering: “Yes, but is it really a duck, or is it really a rabbit?”

Julia Galef is a New York-based writer and public speaker specializing in science, rationality, and design. She serves on the board of directors of the New York City Skeptics (http://nycskeptics.org/), co-hosts their official podcast Rationally Speaking (www.rationallyspeakingpodcast.org/), and co-writes its blog (www.rationallyspeaking.org/) along with philosopher of science Massimo Pigliucci. She received her BA in statistics from Columbia in 2005.

Other Articles from Review

Scamming the Public by Direct Mail