Since July of 2012, Kenny Biddle has been releasing episodes of a video blog titled I Am Kenny Biddle. His videos, which range between six and fifty minutes, feature Mr. Biddle’s rants about such topics as paranormal fraud, ghost investigations, orbs, and the ways that people can be fooled.

Biddle’s no-nonsense attitude and well-reasoned arguments have earned him some respect from the skeptical community. He has graciously agreed to answer some questions for the benefit of Skeptical Briefs readers. 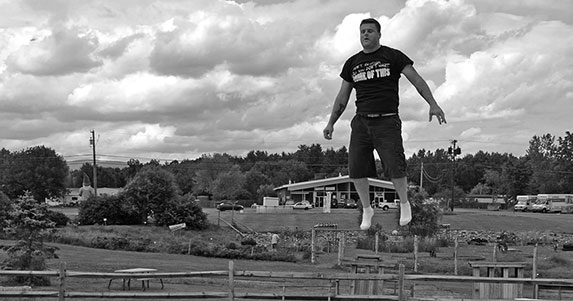 Gurmukh Mongia: I understand that you are very active in confronting alleged paranormal investigators. Would you like to talk a little about your experiences?

Kenny Biddle: Most “paranormal investigators” give themselves this title. There aren’t any required degrees or certifications, yet they magically become experts in various areas of study without ever actually studying. I got tired of seeing the same photography mistakes billed as proof positive or hearing people list credentials they don’t really have. So, I question . . . I question everything. I’ve found that a woman claiming to have a master’s in parapsychology and occult sciences (and who taught paranormal classes based on that credential) was not so forthcoming with the name of the college where she obtained the degree. After much persistence, I found that she got them from The Brotherhood of the Northern Light . . . one of many bogus store-fronts from one man running a “college” from his California ranch, which also served as the Command Center for his (space) alien resistance army (of two). She called the police trying to file a complaint on me for harassment. Another group at­tempted a hoax by using a phone app and placing a “ghost” within a photograph. Their problem: they used a well-known ghost image. I exposed them not only by posting all of the relevant information and images to their site, I also contacted the copyright owner of the image. Needless to say, chaos erupted around them. I devoted an entire video to that experience.

In most experiences, I focus on what’s being presented as photographic evidence. I have a good deal of experience in photography, and have little trouble explaining—and duplicating—the images being presented as ghosts. This usually causes anger on the part of the ghost hunters, since they “verified the authenticity” of the images. Interestingly, when I ask about their photography experience, they have none. I also have a pet peeve when it comes to groups claiming to be scientific, the majority of which have no clue what the term scientific method means. They are under the impression that possessing many gadgets that light up and beep, that have no known relevance to what they’re doing, puts them on the same level as actual scientists. So, I question, asking about the research that verifies their claims of what their gadgets do, asking why they skipped “hypothesis” and started at “theory,” asking what the hell EMF has to do with a ghost. These, along with the many other questions I put forth that go unanswered, are usually not tolerated for long. Anger is usually the response with the realization that they really don’t know as much as they thought they did.

GM: What was your inspiration for starting the videos? What makes your show different?

KB: The idea actually came from a coworker. After attending a paranormal event or giving a lecture, I’d always tell him about the debates I would have, going into great detail and apparently doing so in an excited manner. My coworker would laugh at the way I’d relate the experience, and kept telling me that I should do videos. He kept saying that my intensity and blunt attitude would be entertaining, while getting the information out there as well. So, I gave it a shot.

I guess the difference is that I’m just being me—no fancy editing, no dramatic music or acting. I’m just expressing exactly how I feel, and not sugarcoating my words. Something I’ve seen countless times in the paranormal community is people talking one way in front of others, then another way as soon as backs are turned. I can’t stand that. If I see bullshit, that’s how I call it—then I explain why. Yeah, I curse a lot . . . but that’s the real me when I’m frustrated.

GM: Do you have one or two favorite or most memorable shows? What are they and why?

KB: My favorite episode was about the Sel­ma Mansion in Norristown, Pennsyl­vania. Instead of doing what’s been called a “rant,” I focused on claims made by a semi-famous paranormal team. It was the first time I ventured out of my office for a video to address specific paranormal claims at a location. With the research I did on the site, and some detective work into the claims, I was able to deliver an informative video that provided natural causes for phenomena that were being presented as positive proof of paranormal activity. The video was well received, showing how critical thinking was able to solve ghostly mysteries better than TV-inspired ghost hunting.

My next favorite would have to be “The Pepper’s Ghost Effect,” which went into the history of how the effect was developed, as well as demonstrated how easy it is to recreate in any home. In fact, I recreated a ghost video that was getting a lot of attention on YouTube, which was the inspiration for making the episode. I got a lot of feedback from that episode; it opened people’s eyes to a simple effect they had never known of.

GM: You seem to be channeling a lot of anger and frustration into your videos. Do you see them as a form of catharsis?

KB: Hell yeah! It’s terribly frustrating to continually speak with many people that will easily accept ideas at face-value—despite all the information, logic, and demonstrations you can provide to the contrary. Equally frustrating is listening to speakers, at conferences and seminars, teaching false information and/or their opinions as fact. What’s even worse than both of those: the ones that deliberately hoax for personal gain or fame. To put it bluntly . . . yeah, I get pissed off. The videos (and Facebook page of the same name) are my way of venting my frustrations within the paranormal community and to point out mistakes, misidentification, issues with methodology and procedures, bad evidence, useless equipment and so on. Most people who watch the videos share my feelings, and I’m often told “Thank you! You say exactly what I want to say but are afraid to.” For all the people that cause my frustrations, there’s just as many that share them.

Twice the Skepticism: An Interview with the Evil Twins

Studying Up with A Skeptic’s Guide to Conspiracy