In July 2008, the carcass of a creature soon dubbed the “Montauk Monster” allegedly washed ashore near Montauk, Long Island, New York (Figure 1). It sparked
much speculation and controversy, with some suggesting it was a shell-less sea turtle, a dog or other canid, a sheep, or a rodent—or even a latex
fake or possible mutation experiment from the nearby Plum Island Animal Disease Center. (In time, other “Montauk Monsters” turned up—one, for example, a
decomposing cat [Naish 2008].) 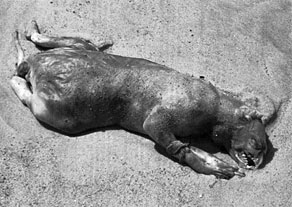 Figure 1. This photo of the Montauk Monster was widely circulated on the Internet, causing much speculation.

Before long, the original creature was credibly identified as a raccoon by wildlife biologist Jeff Corwin (Boyd 2008). Al­though questions remained, I gave
the matter little more attention—for a time.

Case of the Missing Hair

However, when—on an investigative outing on September 19, 2009—I came across a dead raccoon by the roadside, I quickly decided it might be profitable to
study the issue further. My wife, Diana, drove the getaway car while I retrieved the roadkill in busy traffic. I subsequently deposited it at a convenient
wooded site she dubbed the Raccoon Body Farm (after the famous forensic site maintained by the University of Tennessee). (See Figure 2.) I monitored it to
observe developments. 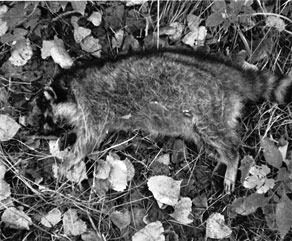 The experiment raised questions. The already putrid carcass decomposed quickly, and in about three days it was largely gone, leaving behind a swarming mass
of maggots plus all of the raccoon’s fur (Figure 3). As I looked again at the Montauk Monster photo, I thought the creature’s fur loss needed explaining.
One suggestion was mange (Radford 2009), which can produce strange-looking creatures. (Indeed, Diana and I once went in search of a Bigfoot in Pennsylvania
that turned out to be a mangy bear [Nickell 2008; “Big Foot” 2008]. More recently I examined, up close, a mangy coyote mistaken for a “chupacabra” near
Springfield, Missouri [Nickell 2011].) However, long familiar with mange from my boyhood days in eastern Kentucky, I did not think the Montauk Monster
looked like a case of mange. 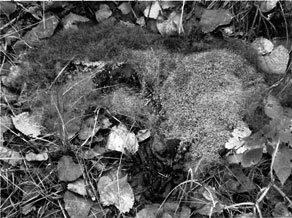 Figure 3. After three days, the decomposition is advanced, but the animal’s fur remains. (Photo by Joe Nickell)

Paleontologist and science blogger Dar­ren Naish (2008) observed that water-logged creatures often lose their fur. But what was a raccoon doing in the
ocean in the first place—if it did not just die on the beach, and if it really was a raccoon?

A housefly on the creature’s back allowed photo enlargement (by colleague Tom Flynn) to be made approximately life size (assuming an upper limit for the
fly as 12mm) and the carcass to be measured as about 65cm (approximately 25.6 inches) long. This is well within the range of the adult common raccoon,
Procyon lotor (accord­ing to the National Audubon Society’s Field Guide to North American Mammals [Whitaker 1996, 748], which gives a length range of 24–37
inches).

Those who doubted the raccoon identification had their main arguments refuted by Darren Naish (2008). First, whereas the creature was said to be too
long-legged for a raccoon, Naish observed: “Raccoons are actually surprisingly leggy”; he asserted that “claims that the limb proportions of the Montauk
carcass are unlike those of raccoons are not correct.” Secondly, claims that the creature had a “beak” prompted Naish to say of raccoons: “The tendency for
the soft tissues of the snout to be lost early on in decomposition immediately indicates that the ‘beak’ is just a defleshed snout region: we’re actually
seeing the naked premaxillary bones. . . . The Montauk animal has lost its upper canines and incisors (you can even see the empty sockets [in one photo]).
. . .”

I recalled an earlier claim that the presence of a hairless raccoon at Montauk had been explained—and then the explanation dismissed as not credible.
Reportedly, three young men had found a dead raccoon on nearby Shelter Island two weeks earlier. As a lark, they gave it a “Viking funeral”: sending it
adrift on a makeshift raft (made of twigs and an inflatable toy)—containing a watermelon and cloth scraps—after setting the carcass afire. (Their prior
revelry involved a “waterboarding endurance competition,” and later hijinks included a “clothespins-on-your-genitals challenge.” Many were skeptical of the
trio’s story, pointing out what a circuitous fifteen-mile route the carcass would have had to travel to get to Montauk (“The Latest” 2009).

However, an investigator is not a dismisser who ignores evidence because it is inconvenient or merely because someone’s behavior does not comport with what
he or she thinks someone would do in a situation. Neither is an investigator the equivalent of a newspaper’s rewrite staffer. Mysteries are solved by the
use of the best, corroborative evidence, together with the principle of Occam’s razor (that the preferred hypothesis is the one that makes the fewest
assumptions consistent with the evidence). It turns out there is considerable corroborative evidence for the “Viking funeral” claim. 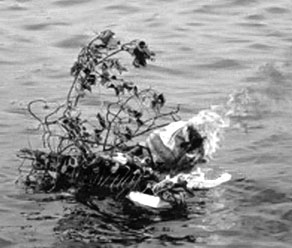 Figure 4. A “Viking funeral” appears to account for the presence and condition of the Montauk Monster.

First, data on the surface currents and winds in the area show that the “Viking funeral” critter would likely have been pushed in the proper direction
(“The Latest” 2009). Significantly, the trio provided photographs documenting their launching. The snapshots (see Figure 4) clearly show a dead
raccoon—first being launched on a raft of sticks as claimed, then blazing and adrift. Also the Montauk Monster has what appears to be a strip of cloth
around its right foreleg, possibly linking it to scraps of cloth used with the “Viking funeral” raccoon. (Enlarge­ment of one of the trio’s photos shows
what could be a band around the raccoon’s right foreleg.) Moreover, the forelegs of the latter are in the same approximate position with respect to each
other as those of the Mon­tauk Monster (“Has the Montauk” 2009). Finally, the latter’s flesh has a decidedly baked appearance, consistent with the
re­ported burning.

Therefore, the best evidence thus far indicates—until perhaps better evidence comes to light—that the Montauk Monster was neither a hoax (involving either
a fake latex creature or a skinned animal) nor a mangy, gone-swimming-and-drowned critter; instead, it is an identifiable raccoon whose dead body was set
ablaze and adrift on a makeshift raft as part of a comically wry ritual dubbed a “Viking funeral.” The dead raccoon does seem to be achieving a kind of
immortality as a result.

I appreciate the research assistance of Tom Flynn and Henry Huber as well as CFI Libraries Direc­tor Timothy Binga.

Naish, Darren. 2008. What was the Montauk monster? Online at http://scienceblogs.com/tetrapodzoology/2008/08/the_montauk_monster.php; accessed October 27,
2009.