The ill-fated 2002 movie The Mothman Prophecies, based on a book of the same title (Keel 1975), focused on a “flying monster” that plagued the Point Pleasant, West Virginia, area for a year, beginning in November 1966. In addition to giant-bird sightings the tale involved alien contacts, Men in Black, a tragic bridge collapse, and other elements.

In a previous critical report in the SKEPTICAL INQUIRER (Nickell 2002), I suggested the identity of “Mothman.” Subsequently I was able to make an investigative trip to Point Pleasant, spending a few days there in mid-April 2002. I came back with some interesting and illuminating information on the case. 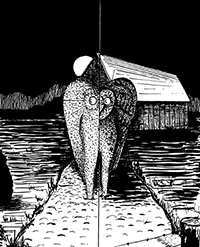 A popular legend of the Point Pleasant area holds that “Mothman” was the creation of a prankster. Supposedly, a local man dressed in a Halloween costume had hidden at night at the abandoned munitions complex known as the TNT area, about five miles north of Point Pleasant, and had scared young couples by jumping out at their cars.

But this local legend is not credible, in my opinion. For one thing, knowledgeable area residents call attention to the fact that there have been several different claimants. For example, Rush Finley (2002), who with his wife Ruth owns the historic Lowe Hotel where I stayed, told me there were “at least half a dozen people” who now claim responsibility for the pranking, supposedly done when they were teenagers. Finley’s opinion is echoed by Charlie Cline (2002), manager of the music store Criminal Records, who thinks many are “jumping on the bandwagon” in this regard. Cline has also heard several such stories.

Another reason this explanation is not credible (except perhaps for later, bandwagon pranks) is that the appearance of such a trickster is not at all compatible with the original eyewitness descriptions of the creature—especially with regard to its glowing red eyes (as we shall see presently).

Costumed prankster or not, there were Mothman hoaxes. Rush Finley told me how some construction workers had used helium from welding tanks to make balloons from sheet plastic and tied red flashlights to them one night. Thus weighted, these Mothmen did not soar high but only drifted over the treetops.

Still other pranks occurred following the first wave of sightings. The spring of 1967 brought a number of UFO reports that were described in local newspapers and involved both misidentification of mundane phenomena and deliberate hoaxing.

Some of the UFOs were soon identified as commercial or military planes (notably a U.S. C-119 “flying boxcar” on a training mission from Columbus, Ohio). However, a private plane with a “prankster pilot” was reported to have been “gliding back and forth across the river for several nights” to frighten locals. On one occasion, however, according to a newspaper account, the pilot came too close to a hilltop and was suddenly forced “to cut his engines on.” (See newspaper clippings in Sergent and Wamsley 2002.)

Detailed reports demonstrate that the original Mothman sightings were not hoaxes. They occurred on Tuesday night, November 15, 1966, when two couples drove through the TNT area and saw a winged creature, “shaped like a man, but bigger,” with glowing red eyes. It walked on sturdy legs with a shuffling gait and, when it took flight and seemed to follow them, it “wasn’t even flapping its wings.” They said it “squeaked like a big mouse” (quoted in Keel 1975, 59–60).

Other reports soon flooded in, including one by two Point Pleasant firemen who visited the TNT area only three nights after the first sighting. They saw the “huge” creature but were positive: “It was definitely a bird.” Many witnesses described it as headless, with shining red eyes set near the top of its body, although one woman spoke of its “funny little face” (Keel 1975, 64–65, 71).

Despite accounts of “glowing” eyes, one of the original eyewitnesses, Linda Scarberry (1966), specifically stated that the effect was related to the car headlights. “There was no glowing about it until the lights hit it,” she said. Others echoed her statement. For example, one man, alerted by his dog, aimed his flashlight in the direction of his barn, “and it picked up two red circles, or eyes, which,” he said, “looked like bicycle reflectors” (Keel 1975, 56).

The reflector-like nature of the creature’s eyes is revealing. As ornithologists well know, some birds’ eyes shine bright red at night when caught in a beam from auto headlights or a flashlight. “This ‘eyeshine’ is not the iris color,” explains an authority, “but that of the vascular membrane—the tapetum—showing through the translucent pigment layer on the surface of the retina” (Gill 1994).

The TNT area, which I visited both days and nights, is surrounded by the McClintic Wildlife Management Area—then, as now, a bird sanctuary! Owls, which exhibit crimson eyeshine, populate the area. Indeed, Steve Warner (2002), who works for West Virginia Munitions to produce .50-caliber ammunition in the TNT compound, told me there were “owls all over this place.” Conversely, neither he nor a coworker, Duane Chatworthy (2002), had ever seen Mothman, although Warner pointed out he had lived in the region all of his life.

Because of Mothman’s squeaky cry, “funny little face,” and other features, including its presence near barns and abandoned buildings, I identified it as the common barn owl (Nickell 2002). One Skeptical Inquirer reader (Long 2002) insisted it was instead a great horned owl which, although not matching certain features so well, does have the advantage of larger size. It seems likely that various owls and even other large birds played Mothman on occasion.

I did some further research regarding eyeshine, learning that the barn owl’s was “weak” and the great horned owl’s only “medium.” However the barred owl exhibits “strong” eyeshine (Walker 1974) and— according to David McClung (2002), wildlife manager at McClintic—is common to the area; indeed, it is even more prevalent there than the barn owl. It is also larger than the barn owl, which it somewhat resembles, and is “only a little smaller than the Great Horned Owl” (Kaufman 1996, 317). (Mounted specimens of these and other species of owls are profusely displayed in the West Virginia State Farm Museum near the McClintic preserve. Museum Director Lloyd Akers generously allowed me special access to examine and photograph them.)

In light of the evidence it seems very likely that the Mothman sightings were mostly caused by owls—probably more than one type. A man named Asa Henry shot and killed one, tentatively identified as a snowy owl, during the Mothman flap. Although only about two feet tall, a newspaper dubbed it a “giant owl” due to its wingspan of nearly five feet (Sergent and Wamsley 2002; 94, 99). In Point Pleasant I was able to view the mounted specimen and to speak with Mr. Henry’s grandson, David Pyles. Himself a taxidermist, Pyles (2002), who is “very skeptical of Mothman,” told me his grandfather always maintained that the Mothman flap ended after he had shot the bird.

Owls are very likely responsible for other birdman sightings. One of the these is the 1952 case of the Flatwoods Monster that supposedly arrived in Flatwoods, West Virginia, aboard a flying saucer. Loren Coleman in his Mothman and Other Curious Encounters (2002) sees in that case “elements foreshadowing” the subsequent Mothman reports. However, as a Michigan Audubon Society publication concluded, my investigative report on the case (Nickell 2000) “convincingly demonstrates that the alleged flying saucer was really a meteor and the hissing creature from outer space was none other than a Barn Owl! Check it out, it’s a real scream!” (Those Monster Owls 2001).

As to Mothman, “cryptozoologist” Mark A. Hall (1998) has opined that it may be a hitherto undiscovered species of giant owl! He has dubbed it “Bighoot” and cites evidence that it has long existed in the Point Pleasant area. I take this as an implicit concession that Mothman—of all the creatures known to science—most resembles an owl, except for size.

Here then is the question separating the mystifiers from the skeptics: Is it more likely that there has long been a previously undiscovered giant species among the order strigiformes (owls), or that some people suddenly encountering a “monster” at night have misjudged its size? The latter possibility is supported by the principle of Occam’s razor, that the simplest tenable explanation is to be preferred as most likely correct. The principle seems especially applicable to the case of Mothman.