Among the curious mysteries of Canada’s Yukon Territory is the reported discovery of an unusual coin in the gold fields near Dawson City in 1900. According to raconteur Ed Ferrell in his Strange Stories of Alaska and the Yukon (1996, 120), the coin “appeared to have been minted before the Ice Age” (emphasis added). (That began about 110,000 years ago and ended approximately 12,000 years ago.)

When I lived in Dawson in 1975–1976, I never heard of this fantastic claim. Yet I spent a significant amount of time working for the Dawson City Museum where, one might imagine, other artifacts might have been acquired—if any there were—of such a stunningly early and advanced civilization. (The earliest-known civilization was Sumer in Mesopotamia, dating to about 3,500 bce.) Nevertheless, coming across Ferrell’s mystery tale, I was determined to investigate. 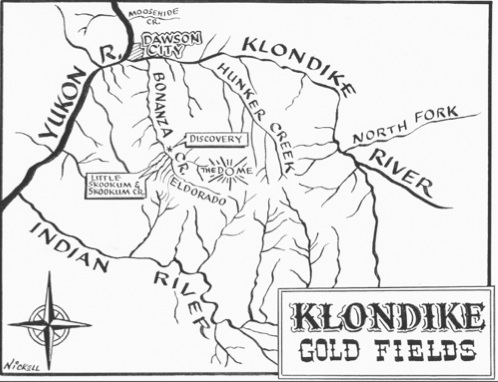 The coin was discovered about a year after the end (as most sources reckon) of the great Klondike gold rush. That stampede was triggered after George Washington Carmack and two Native American companions, known as Skookum Jim and Tagish Charlie, discovered gold on August 16, 1896. (Jim was the brother-in-law of Carmack, whose common-law wife Kate was on the expedition though not prospecting.) The discovery was made on Rabbit Creek, which was soon renamed Bonanza. The Klondike’s other gold-bearing creeks radiated like spokes of a wheel whose hub was a bald mountain called King Solomon’s Dome or simply The Dome (see Figure 1) (Morgan 1967, 132–142; “Klon­dike Gold Rush” 2015; Sack 1974, 3–7).

The following year, the stampeders came by the thousands, raging with Klondike fever. They arrived by land, or boat, or a combination, being required by safety-minded Canadian authorities to have a year’s worth of food—part of a typical ton of equipment and supplies. An entire tent town sprang up; so did a sawmill, and soon a clapboard Dawson City stood on the site (Sack 1974, 3–18). Banners and cloth signs proliferated (wood being scarce but cloth from tents being readily available). They proclaimed: “Gold Dust Accepted,” “New Tents,” “Dogs,” “Laundry,” “Meals 5¢,” “Saloon”—even “Fancy Dress Making” and “Fortunes Told $1” (Nickell 1994). Moneymaking schemes were everywhere.

When the majority of stampeders arrived in 1898, the most productive creeks had all been staked—with nearly 10,000 claims recorded by July. Some enterprisers amassed numerous claims, buying and selling, and hiring the “Cheechakos” (newcomers) to do the work. Others who missed out on becoming miners set up businesses catering to miners’ needs or worked for those who did (“Klondike Gold Rush” 2015; Morgan 1967, 139, 141).

News was in great demand, as shown by a surviving copy of a handwritten newspaper. The first daily paper was issued by the Midnight Sun, beating the Klondike Nugget whose editor had arrived first but awaited his equipment. He was still waiting, apparently, when The Dawson Miner came off the press. During the winter of 1898–1899 the Nugget was finally printing but forced to use wrapping paper rather than newsprint. (The editor eventually went bankrupt.) In 1899, the Dawson Daily News debuted, and the next year, on August 28, that paper published the article of interest to us, “Ancient Coin Found: A Puzzle to Students” (Morgan 1967, 139; “Klondike Gold Rush” 2015).

I feel something of a kinship with the reported site of the coin’s discovery “at the head of Big Skookum Gulch.” I have actually been in the immediate vicinity of that site, as Big and Little Skookum creeks are tributaries of Bonanza Creek, where gold was discovered in 1896 and where I went on outings and even panned for gold (Figure 2; see Nickell 2015). (I was in the old gold fields often, for example on Hunker Creek and elsewhere, staking my own placer claim on Moosehide Creek, managing a business that ran a riverboat on the Yukon, and once whitewater rafting on the Klondike [Nickell 2015].) (Again, see Figure 1.) 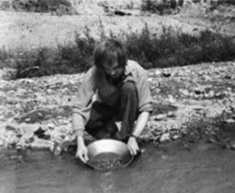 Figure 2. The author as a young man panning for gold on historic Bonanza Creek. (Author’s photo)

The site name is itself interesting. The word skookum comes from the jargon of the Chinook Indians and denotes a range of positive attributes, such as “big,” “durable,” “excellent,” “powerful,” “ultimate,” and so on. It may not be a coincidence that the mouths of Skookum and Little Skookum creeks are opposite the original site on Bonanza (again see Figure 1), where gold was codiscovered by a prospector named “Skookum Jim” (Morgan 1967, 132–134 “Skookum” 2015). (Bigfoot enthusiasts claim the word was sometimes a noun, a skookum being an evil spirit of the woods that they equate with Sasquatch [Meldrum 2006, 112–113; “Skookum” 2015].1)

As originally reported (“Ancient Coin Found” 1900), the “remarkable coin” was discovered by a man named Henry Nicodet “at the head of Big Skookum Gulch and fourteen feet under the frozen earth.” In the Klondike gold fields, one made prospect holes by digging six feet down to the permafrost, then building a fire to soften the earth for about fourteen inches, digging more and repeating, until reaching bedrock where most gold was found. Thus, “with two companions Nicodet sunk to bedrock, the last five feet being through an ancient glacial mass of ice.” Then, “Directly beneath the paleocrystic mass, and lying on a fold of bedrock, he found a coin that is a puzzle to the archaeologists and numismatic experts of this section, though there are men here skilled in reading the Egyptian heiroglyphics [sic] and other ancient languages.”

It is about the size of a copper cent,2 though not more than half as thick, and is apparently of brass, of some combination of copper and zinc. Both sides are covered with strange characters resembling heiroglyphics [sic] to the untrained eye, and the edge is milled as artistically as “the dollar of our daddies.” A peculiar thing about the coin is that it does not appear to be worn at all, the edges of the heiroglyphics [sic] being as sharp and clear cut as a new twenty-dollar gold piece. It was made with a die like modern coins.

In fact, this does not sound like an ancient coin at all. Not only did it have a freshly minted look, but it bore a milled edge. These features are evidential, as will be apparent from the following brief timeline of currency and coins.

In the earliest agricultural times, cattle were used for currency (about 7,000 bce). Metal money, formed of bronze ingots that were frequently cattle-shaped, and of varying weights to denote values, appeared several millennia afterward (circa 2,000 bce), and still later bronze was superseded by the precious metals silver and gold and by other shapes, such as cat heads in Egypt (ca. 1,000 bce). A natural alloy of gold that was up to 35 percent silver, known as electrum, was used to make bean-shaped ingots bearing a punchmark that signified the value, thus eliminating the need to weigh them. The first true coins were produced by the Lydians, about 640 bce; with a punch, they hammered into the soft metal the image of a man or animal that would signify the coin’s worth (Panati 1984, 169–170).

Such coins could have precious metal shaved off the edges, thus cheating the recipient. To end this practice, milled edges were invented, being introduced in the late seventeenth century (Panati 1984, 169–170). Considering the features of our questioned artifact—the milled edges, the use of dies to form the faces in relief, and the lack of wear—we can infer a relatively modern coin, or even a token. (Tokens often had milled edges too, not to prevent metal shaving but to impart a quality look.) It would have been of relatively recent manufacture, minted no earlier than about 225 years before it was discovered, and in fact might have been quite recent.

So the only supposed “evidence” of a fabulously ancient civilization existing, long before any known historical record, is the allegation that a coin (which is not in evidence, was not expertly examined, and which even so appears to be modern) was found where it should not have been—under prehistoric ice.

As it happens, Henry Jules Nicodet was a very real person (as CFI Libraries Director Tim Binga established for me). According to the 1901 census, Nicodet was born about 1867 in Switzerland, immigrated first to the United States, then—in 1898—to Canada. He was living with his wife and three children in Dawson City where his occupation was listed—not as gold miner but as “gardener.” This suggests that if he had had the mine on Skookum Creek at all, he had either ceased to run it, or it was not his principal endeavor. (He lived to age eighty, dying in 1947 in Tacoma, Washington, according to his death certificate.)

A number of coins and other artifacts attributed to ancient civilizations have occasionally turned up in North America, some of which have been hoaxes. Again, a “Norse penny” of 1065–1080 c.e., found at an archaeological site in Maine, was the only non-Indian artifact there and probably came from the north by trade with the Vikings. Their site at L’Anse aux Meadows at the northern tip of Newfoundland (where I have investigated) dates from about 1000 c.e. (Fort 1974, 147–160; Feder 1996, 89–118). Even in the Yukon, three Chinese coins have been discovered, one as old as 1403–1424, but these appear to have either been brought by prospectors who carried them as amulets or to have come from earlier trade: China to Russia to Pacific Northwest Indians (Lorenzi 2012).

Taken together, the evidence indicates that the “ancient coin” in question may have been either a coin or token, dated no earlier than the late seventeenth century. The “heiroglyphics” [sic] might have been anything from Chinese ideograms to Masonic symbols. (The apparent copper-and-zinc composition would be consistent with such coins or tokens.) At the time of its discovery—based on the newspaper report alone—a journal of coin scholarship labeled the claim a “whopper” and placed it under “Fairy Stories,” concluding, “Somebody up there is playing on credulity of the people” (see The Numismatist 1899–1900, 278–279). The original newspaper story had concluded: “Evidences of a former race having inhabited this section are unfortunately rare, but only on a few creeks has work been done, and then only to an upper bedrock beneath which is a sub-stratum of gravel superimposed on a second and probably primitive bedrock. When this is penetrated additional evidences of early occupation will probably be found” (“Ancient” 1900).

In fact, they were not. Although the gold rush had ended, mining continued—including dredging operations from 1906–1966, with millions of dollars sent to the market annually (Sack 1974, 18–21). No trace of the imagined civilization has ever been uncovered.

Thanks to Tim Binga, CFI Libraries Director, and Melissa Braun for their repeated assistance with research for this investigation.