As a PhD student in medical sciences, people often ask me questions about diet and nutrition. The problem is that several bogus claims have spread and are widely believed. Sometimes it only takes a website posting a diet claim for people to start propagating it without any critical analysis. For
example, very recently a meme claiming diet sodas harm kidney function achieved more than 150,000 shares on Facebook, even though the image didn’t offer any explanation for its claim. As historians of science Naomi Oreskes and Erik Conway put it in their book Merchants of Doubt, “the Internet has created an information hall of mirrors, where any claim, no matter how preposterous, can be multiplied indefinitely.” Here I discuss some myths about nutrition circulating in Brazil.

Coke Zero Is High in Sodium

The myth about Coke Zero is very common in Brazil. Some time ago I heard this claim being repeated on a local radio program. Questioning this claim doesn’t require any medical knowledge; you just need to compare nutrition information of different beverages or foods. In Brazil, a 350 mL can of Coke Zero has 49 mg of sodium. So, if Coke Zero really has a lot of sodium, every drink with more than 14 mg of sodium per 100 mL also has a lot of sodium. This myth probably started because Coke Zero has more sodium than Coke and Light Coke (the Brazilian version of Diet Coke). But people stop the comparison there because other diet sodas sold in Brazil, in fact, have more sodium. What about other common beverages? For example, in 200 mL of a Brazilian milk brand, there are 130 mg of sodium. I think that’s enough to raise suspicion: the milk has never been accused of having a high sodium amount and Brazilians drank milk long before Coke Zero came along. To debunk the myth completely, just search for “sodium” on the website of the Food and Drug Administration (FDA). According to the FDA,1 480 mg or more of sodium per serving (it’s usually 240 mL for drinks) is considered “high” in sodium. Also, 120 mg or less of sodium per serving is considered “low” in sodium. Thus, Coke Zero does not have a high amount of sodium; it has a low amount of sodium.

You Need to Detox Your Body 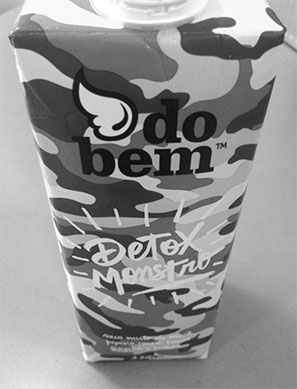 In conventional medicine, detox is a treatment for drug-dependent patients, during which their drug is removed from their bodies. In this case, detox is a valid medical treatment; it’s not a myth. But it has another meaning: for alternative therapists, “detox” is the use of therapies to eliminate toxins from the body. The latter is much better known to laypeople—and it’s bogus. The idea of removing toxins from the body looks so appealing that, in Brazil, the name of a green juice made of apple, cucumber, cabbage, ginger, and mint is “Monster Detox” (Figure 1). But scientifically it doesn’t make any sense. Notice that most detox claims don’t identify which toxins they’re talking about. Second, as Edzard Ernst, emeritus professor of alternative medicine at Exter University, explained in an article in The Guardian,2 if toxins did accumulate in the body, we would be dead or in need of medical intervention. In healthy persons, kidneys, liver, skin, and lungs eliminate toxins from our body. In 2012, Ernst published a paper about “alternative” detox.3 It’s astonishing that he wasn’t able to do a systematic review because, when looking for the literature in electronic databases, he only found articles about the conventional detox. As he explained in the article, alternative detox includes several different therapies ranging from different types of diets to skin bruising to colonic irrigation. However, published studies are of such poor quality that no conclusions can be drawn from them. The problem is not only the lack of evidence for benefit but the fact that it can also be dangerous, including malnutrition caused by diets, hepatotoxicity due to supplements, and perforation of the colon caused by colonic irrigation.

You Need a Gluten-Free Diet

Gluten-free diets can help people diagnosed with gluten sensitivity. For example, celiac disease is a serious autoimmune condition that causes intestinal inflammation triggered by a reaction to gliadin, a gluten component. Celiac disease is present in about 1 percent of Americans. There are reports of non-celiac gluten sensitivity (NCGS), but the evidence of its existence is still debatable. In her Skeptic article,4 Harriet Hall commented that one trial5 showed evidence for NCGS but other trials6 showed that, in fact, it is not gluten people are sensitive to; it’s Fermentable Oligo-, Di-, Mono-saccharides and Polyols (FODMAPs, certain types of carbohydrates). The problem is that people with no gluten sensitivity, in order to lose weight, have cut gluten out of their diets. It’s interesting to point out the lack of critical thinking: if someone actually loses weight on a gluten-free diet, it doesn’t mean it’s because of the absence of gluten. Gluten is a protein found in many grains, breads, cereals, and pastas. When a person adopts a gluten-free diet, it’s possible that he or she eats less of those things and ends up reducing calories. Besides, gluten-free diets can lack nutrients because whole grains, which contain gluten, are a good source of vitamins, fiber, and minerals. As written in a paper published in the Journal of the Academy of Nutrition and Dietetics,7 “despite the healthy claims for gluten-free eating, there is no published experimental evidence to support such claims for the general population. In fact, there are data to suggest that gluten itself may provide some health benefits.” The authors of this paper also noted, “There are no published reports showing that a gluten-free diet produces weight loss in persons without celiac disease or gluten sensitivity.” Remarkably, the paper’s authors also commented on the possibility of weight gain with a gluten-free diet.

Eating on Multiple Occasions During the Day Helps Weight Loss

A lot of people think increasing the number of times they eat each day helps them achieve weight loss. In fact, some earlier studies had showed inverse association between the number of eating occasions during the day and excess adiposity. However, researchers recognized underreporting of eating frequency and energy intake are strong confounding factors in epidemiological studies. Snacking is more likely to be underreported in obese or overweight people.8 Also, studies have found that participants reported implausible energy intake. When that was removed from the analysis, the association between eating frequency and body mass index became positive.9 Moreover, interventional studies measured daily energy expenditure and concluded that eating frequency has no discernible effect on it.8,9 It’s important to note that there is a possibility that fewer than three daily meals impair appetite control. However, it is premature to make any recommendations on eating frequency for weight control for different factors, such as the short-term duration of studies.9 In conclusion, whenever you hear about the relationship between high eating frequency, obesity, and metabolism, you have enough reasons to be skeptical.

This myth probably started because earlier studies had suggested a correlation between low vitamin levels and risk for diseases; this is the case of vitamin E and heart disease. Also, people believe that it’s better to be on the safe side and take vitamin pills in case they aren’t getting enough of it from their diet. But several randomized controlled trials have been done on this topic, and vitamins do not prevent chronic disease or death in people with no evidence of micronutrient deficiencies. Moreover, some studies showed that beta-carotene, vitamin E, and possibly high doses of vitamin A increase mortality. It’s exactly what the title of the paper says: “Enough Is Enough. Stop Wasting Money on Vitamin and Mineral Supplements.”10

1. FDA. “Sodium in Your Diet: Using the Nutri­tion Facts Label to Reduce Your Intake,” Available at
http://www.fda.gov/food/ingredientspackaginglabeling/labelingnutrition/ucm315393.htm.

2. Mohammadi, Dara. 2014. “You Can’t Detox Your Body. It’s a Myth. So How Do You Get Healthy?” The Guardian. Available at http://www.theguardian.com/lifeandstyle/2014/dec/05/detox-myth-health-diet-science-ignorance.