Among the
significant European figures of the sixteenth century, Paracelsus (1493–1541)
was a transitional figure in the contest between magical and scientific
thinking. On the one hand, he was part charlatan: his work was riddled
with mystical nonsense about alchemy and the search for immortality.

On the other, he rejected much ancient nonsense, advocated experimentation,
developed the idea that chemical substances might have medical value
(Gridlan 1997, 881; Chavallier 1996, 21–22), and famously ob­served
that whether or not a poison is lethal de­pends on its dose (qtd. in
Chevallier 1996, 22).

Although he adopted the name Para­cel­sus—apparently to suggest superiority
to Cel­sus, the Roman medical writer—he was born Theophrastus Bombastus
von Hohen­heim in 1493. He was known not only for his revolutionary
ideas but also for his argumentative manner; some claim—wrongly—that
the word bombastic was derived from his name (Hauck 2000, 99).1 An inveterate traveler, he settled into the role of town physician and university lecturer at Basel from 1526 to 1529, when he
lost a lawsuit over a professional fee. He continued wandering throughout
Europe, Asia Minor, and Africa until he was invited to Salzburg, Austria,
by the prince-archbishop in 1541. However, Paracelsus died there on
Sep­tember 24, 1541, at the age of forty-eight (Collier’s Encyclopedia, 1993; Para­celsus 2008). 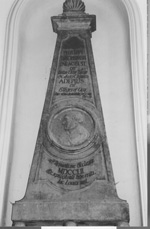 There
are those who say that Paracelsus continues to be a transitional figure
of another kind: a spirit interacting with the living and even being
sought for miraculous cures. On a trip to Europe in 2007, I visited
two sites in Salzburg where these activities are reputed to continue,
Salzburg Castle and the tomb of Paracelsus.

Located
on the river Salzach, Austria’s beautiful city of Salzburg is capital
of the state of the same name, both taking their appellation from the
salt—the so-called “white gold”—mined from mount Dürnberg.
Salzburg was the birthplace of Mozart, and today it offers many sights
including a baroque cathedral, a palace (Schloss Mira­bell) and gardens,
and (as part of the latter) a poignant little dwarf park bearing statues
of the wee people who once graced the royal court (Salzburg n.d.; Der Zwergl­garten 2007).

The
castle, the Hohensalz­burg Fortress, overlooks—actually towers over—Salzburg
from atop the Mönchsberg mountain. Built in 1077, the structure is
accessible by a steep footpath or by the funicular (a cable-operated
railway), and it offers impressive interior scenes to­gether with commanding
views of the historic city. The fortress was so imposing that for a
thousand years it was never at­tacked, although “when Napoleon stopped
by, the city wisely surrendered” (Steves 2007).

According
to paranormalist Dennis Will­iam Hauck in his book The
Inter­national Direc­tory of Haunted Places
(2000, 99):

Psychics
say [Paracelsus’s] ghost roams the castle grounds search­ing for
his many manuscripts that were taken from his room after his death and
hidden away by the Prince Bishop. American tourist Deb Dupre was one
of many to feel the presence of Paracelsus in the castle. Her en­counter
during a visit in 1986 changed her life, causing her to become more
unconventional and creative and open to the deeper symbolism of alchemy.
She even started painting dramatic and colorful depictions of alchemical
forces in her own life. Dupre also picked up paranormal energy in several
photographs of the castle, including the spiraling mist that followed
her around.

A copy of
one such “ghost” photo is reproduced in Hauck (2000, 99). Unfortunately,
science has not found such “spiraling mist” to be due to “paranormal
energy.” Instead, much evidence shows it is simply the result
of the camera’s flash rebounding from the wrist strap! 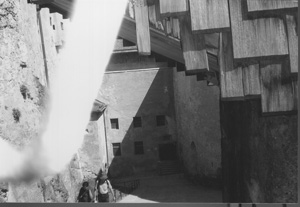 I
did a pioneering study of this effect (Nickell 1996, 13–14) and have
replicated it many times under controlled conditions. Depending on the
nature of the strap (round or flat, braided, smooth, etc.), the orientation
and closeness of the strap to the camera, as well as other factors including
lighting conditions, a considerable variety of effects can be produced.
Even so, other instances of camera-strap “ghosts” in Hauck (2000,
110, 120, 157) are recognizable. (The interested reader should compare
an example in Hauck [2000, 110] with one of mine [Nickell 1996, 13] to see how similar the effects can be.)

Visiting
Salzburg Castle with my colleague Martin Mahner, I sought out the site
in question and snapped some experimental pho­to­graphs, one of which
is shown in figure 1. (At the bottom of the white curve, the more mist-like
blurring is due to the strap’s relatively far distance from the lens,
an effect that occurs along the entire length of the analogous curved
line in the tourist photo, showing that that section of the strap was
the farthest from the lens when the flash went off.)

Except
for the photo and that reference to what “psychics say,” Hauck
offers no further proof that Paracelsus’s ghost, or any other, haunts
the fortress grounds. Indeed we queried one castle shopkeeper who insisted
that there was no ghostly lore—no specific story or generalized topic—that
she was aware of; neither were there any reported ghostly experiences
that had come to her attention. Virtually no one, she told us, asks
about ghosts. Subsequently, at the castle’s museum shop, a young lady
attendant echoed the first shopkeeper’s sentiments.

Of
course, no one can prove there is not a ghost at the fortress, but fortunately
no one has to. Rather, the burden of proof falls on claimants, and thus
far they have utterly failed to meet the challenge.

After searching
for the ghost of Paracelsus at the castle, Martin and I visited the
adept’s tomb at St. Sebastian’s church cemetery. We were there because
of a statement by Hauck (2000, 99) regarding Paracelsus: “To this
day, many ill and crippled people visit his gravesite hoping for a miraculous
cure from the spirit of the greatest doctor of all time.” (Hauck’s
specific source is unclear, since he supplies only a generalized bibliography.)

Located
on a line of sight that runs due north from the castle, the cemetery
is entered from the street Lizer Gasse and is at once a place that is
quintessentially baroque and Italian—as well as one of quiet repose.
Its centerpiece is the grave of Prince-Archbishop Wolf Dietrich (1587–1612).
The cemetery also contains the Mozart family tomb (with the graves of
the composer’s wife and father, Mozart himself being buried in Vienna),
as well as the graves of other Salzburg notables.

Paracelsus’s
grave niche in the church’s exterior, shown in figure 2, bears a bas-relief
profile of him. It also includes a Latin inscription stating, “Here
are the effigy and the bones of Philippus Theo­phrastus Para­celsus,
who has won such fame in all the world through his Alchemy, until they
are again clad in flesh. When this church was repaired in 1752 they
were lifted from their mouldering grave and interred at this spot.”

Alas,
while we were at the tomb, taking photographs and making notes, we watched
in vain for the pathetic pilgrims who were expected to visit, hoping
for magical healings. Only a curious tourist couple stopped briefly.
Finally, I spied a young priest hurrying by, and I called out, “Excuse
me, Father, do you speak English?”

I
told him a book claimed that people came to Paracelsus’s tomb to be
cured of their ailments, and I asked if this were in­deed so.

“I’ve
never heard such a claim,” he told me. He did say that there was a
group that made annual visits to the tomb, but he was unaware of any
healing tradition at the site.

Even
Hauck makes no mention of any actual healings being claimed at the site.
If there are, their numbers would no doubt still pale in comparison
to the French healing shrine, Lourdes. More than five million people
visit Lourdes annually, yet only sixty-seven alleged “miracle cures”
have been officially recognized since 1858 (D’Emilio 2008). Not only
is that an abysmal record, but the claims at such healing shrines are
invariably only examples of the logical fallacy arguing from ignorance
(that is, drawing a conclusion from a lack of knowledge): “One does
not know why the condition abated, so it must have been a miracle.”
In fact, some “cures” are attributable to poor investigation, while
others may simply represent misdiagnosis, psychosomatic conditions,
prior medical treatment, the body’s own healing power, and other factors
(Nickell 2007, 202–205).

Despite
our disappointing search, Para­celsus does continue to be among us—not
as a spirit plaguing our photos or providing miraculous healings but
as a transitional figure in man’s gradual emergence from the shadowy underworld of ignorance
and su­per­stition into the bright realm of science and reason.

I am grateful
to CFI/Germany for inviting me to Darmstadt for a conference, from whence
the indefatigable Martin Mahner and I were able to launch a five-country
investigative tour. As always, I am supremely indebted to John and Mary
Frantz, who generously set up an investigative fund that makes such
endeavors possible. I also want to thank, as ever, Tim Binga, director
of CFI libraries, for his research assistance and other colleagues who
continue to help in so many ways.