“Snake oil.” The expression has come to be synonymous with a quack remedy. But questions about the origins of the term provide the basis for an interesting investigation.

Although considered quintessentially American, patent medicines actually originated in England. The recipient of the first royal patent for a medicinal compound is unknown, but the second was granted to Richard Stoughton’s Elixir in 1712. By the mid-eighteenth century an incomplete list included 202 “proprietary” medicines-those protected by patent or registration. Relatively few of the ready-made medicines were actually patented-which required disclosure of their ingredients-but rather had their brand name registered. Nevertheless, the term patent medicine has become a generic term for all self-prescribed nostrums and cure-alls.

Shipments of patent medicines were halted by the Revolutionary War, and American entrepreneurs took the opportunity to meet the demand. Post-war nationalism and cheaper prices of the non-imported medicines helped American vendors maintain their lead over English suppliers (Munsey 1970).

Among the notable patent medicine men and women were Perry Davis, whose Pain-Killer became famous in the 1849 cholera epidemic and was subsequently spread worldwide by missionaries who used it as a cure-all for heathen sufferers; Lydia E. Pinkham, whose portrait on her Vegetable Compound, first marketed in 1875, made her the most widely recognized American woman of her day; the Kilmer brothers, Andral and Jonas, who moved to Binghamton, New York, in 1879 and were soon selling Swamp Root kidney and liver medicine and other “family remedies” from a palatial eight-story building; the trio of “Doc” Healy, “Texas Charlie” Bigelow, and “Nevada Ned” Oliver, who originated the Kickapoo Indian Medicine Company in 1881; and Mrs. Violet Blossom, who as “Lotus Blossom” ran a medicine show with her husband in the early 1900s and became known as “the queen of pitch doctors” (Holbrook 1959).

Among the most fascinating peddlers were one-time preacher Fletcher Sutherland and his seven daughters, whose hair had a collective length of thirty-seven feet. When the young ladies performed their vocal and instrumental concerts-at such venues as the 1881 Atlanta Exposition and, by 1884, Barnum and Bailey’s Greatest Show on Earth-Fletcher Sutherland shrewdly observed that the girls’ long hair was a greater attraction than their musical ability. This led him to create the “Seven Sutherland Sisters Hair Grower,” a concoction of alcohol, vegetable oils, and water. When the fifth daughter, Naomi, died unexpectedly in 1893 business was so good that, to keep up appearances, the remaining sisters hired a replacement. Overall, their hair grower and related products brought in more than $2.75 million over a 38-year period, but the septet squandered it on an opulent lifestyle that included each having a personal maid to comb her luxuriant tresses (Lewis 1991).

The medicine peddlers used a number of tricks and stunts. The larger traveling shows, employing advance men to herald their arrival, entered town with circus-like fanfare, typically with a band leading the procession of wagons. Skits and other diversions were used to attract audiences, who eventually were treated to the “Lecture” (which, when medicine shows expanded into radio, became the commercial). Assistants who moved through the crowds were often garbed as Quakers to lend an air of moral respectability. Native Americans were frequently recruited to promote the notion of “natural” medicine which was given names like Wright’s Indian Vegetable Pills, Seminole Cough Balsam, and various Kickapoo cures (Holbrook 1959, 196-215; Munsey 1970).

A major component of most tonics, “cures,” bitters, and other nostrums was alcohol. During the Temperance era the patent medicines were often sipped, with a wink, “for medicinal purposes,” leading the promoters of Old Dr. Kaufmann’s Great Sulphur Bitters to advise the public: “Never Use Cheap Rum Drinks Which Are Called Medicine.” Interestingly, the manufacturers never felt obliged to disclose the alcohol content of their product (Holbrook 1959, 159). The alcohol-as well as the placebo effect-explains why the nostrums often won testimonials from their purchasers, who felt better and so believed they had been helped rather than victimized.

In time worthless cure-alls came to be known as “snake oil.” One source asserts, “There is no such thing as snakeoil, though many thousands of bottles containing stuff called snakeoil were sold to gullible patrons of carnival sideshows in the nineteenth and early twentieth centuries” (Morris and Morris 1988). Actually, real snake oil was prized for its supposed medicinal properties. In 1880 for example, a newspaper article on a Pennsylvania man-“a celebrated hunter, trapper and snake-tamer by the name of John Geer”-told how he killed rattlesnakes and extracted “oil from their bodies.” The article stated: “this oil is very useable and sells readily for $1 per ounce. It is said to have great curative powers” (“Killing Snakes” 1880). I once saw a bottle in a private collection with a label on which was actually penned “Snake Oil” and that (if memory serves me) may have dated from the mid-nineteenth century or even earlier.

In any event, a cowboy named Clark Stanley, who called himself “The Rattlesnake King,” sold a Snake Oil Liniment that was reputedly “good for man and beast.” In 1893, at the World’s Columbian Exposition in Chicago, Stanley is said to have held crowds spellbound as, dressed in colorful western garb, he slaughtered hundreds of rattlesnakes, processing the juices into the cure-all.

A circa 1890s advertisement described Stanley’s snake oil as “A wonderful pain destroying compound.” It was “the strongest and best liniment known for the cure of all pain and lameness.” To be “used external [sic] only,” it treated “rheumatism, neuralgia, sciatica, lame back, lumbago, contracted muscles, toothache, sprains, swellings, etc.” It also, the ad said, “cures frost bites, chill blains, bruises, sore throat, [and] bites of animals, insects and reptiles,” in fact being “good for every thing a liniment should be good for.” Promising “immediate relief,” it sold for fifty cents a bottle (Fowler 1997, vi, 10-12).

Stanley claimed the secret recipe came from a Moki Pueblo Indian medicine man. (Reportedly, some Native Americans, including the Choctaws, did treat rheumatism and other ills with applications of rattlesnake grease.) In 1917, however, tests of a federally seized shipment of Snake Oil Liniment revealed it to be mostly mineral oil containing about one percent fatty oil (thought to have been beef fat), along with some red pepper (probably to impart a soothing warmth to the skin) and possible traces of turpentine and camphor (perhaps to provide a suitably medicinal smell) (Fowler 1997, 11-12). 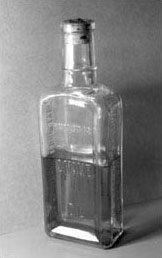 The bottle shown in the accompanying photograph (a gift to the author from skeptic Robert Price of Bloomfield, Connecticut) is from one of Stanley’s many imitators. While the front of the embossed bottle reads “Known as Snake Oil,” the sides inform that it is “Miller’s Antiseptic Oil” sold by the “Herb Juice Medicine Co.” The exact date is unknown, but the bottle was produced by an automatic glassblowing machine, which means it was manufactured after the turn of the century (see Munsey 1970, 33). Another imitator, probably inspired by the 1909 centennial of the sixteenth president’s birth, called his product Lincoln Oil. As indicated by a handbill in my collection, it supposedly worked from head to toe, curing toothache and corns alike.

Toward the close of the horse-and-buggy era the sale of patent medicines had become immense and so had the resulting victimization of the American public. A backlash came in the form of a campaign launched in 1905 by Collier’s magazine against what it called “The Great American Fraud.” Although the patent-medicine lobby in the U.S. Congress proved potent (not unlike today’s tobacco lobby), the tide was eventually turned and the federal Pure Food and Drug Act became law on January 1, 1907 (Munsey 1970; Holbrook 1959, 3-4).

Of course, not all of the tonics and cures were deliberately bogus. Some derived from homespun remedies which-by trial and error-were sometimes found to be effective treatments. Books of “receipts” (recipes) usually included a large section of home remedies (Marquart 1867). Among my own ancestors were a couple of eastern-Kentucky folk doctors, James Harrison Murphy (1843-1923) and his wife Martha Baker (1849-1917), who relied on such medicines. Harry gathered the herbs and roots for their remedies, which included a “blood tonic” (that was brewed, sweetened, and mixed with alcohol), along with a vermifuge and horehound tea. Martha administered the nostrums and offered other treatments such as lancing boils and setting broken bones (Nickell 1978).

In addition to folk remedies, quasi-pharmaceutical “receipts,” and recipes allegedly obtained from Indian medicine men, there were other sources of patent-medicine formulas. Some proprietors, like Fletcher Sutherland, seemed to rely on sheer inspiration. Mrs. J. H. R. Matteson of Buffalo, New York, went a step further, offering (according to an embossed bottle in my collection) “Clairvoyant Remedies.” Then there was simple imitation: the success of Paine’s Celery Compound (“A Nerve Tonic”) prompted other manufacturers to offer Celery Bitters, Celery Malt Compound, and Celery Crackers, as well as products called Celerena and Celery-Vesce (Holbrook 1959, 52-53).

Implementation of the Pure Food and Drug Act forced many medicines off the market and compelled others to change their advertising, product content, or both. But sale of patent and proprietary medicines continued, including Dr. Worden’s Female Pills (for “Female Diseases and Troubles, Peculiar to the Sex and Women’s Delicate System”), a product called Vin Vitae (or “Wine of Life,” a “tonic stimulant” that listed among its ingredients port wine and coca leaves, the source of cocaine), Dr. McBain’s Blood Pills (“a blood cleanser and purifier”), and Princess brand Hair Restorer and Bust Developer (both reassuringly described as completely harmless and sporting money-back guarantees). Such products were sold by mail-order companies (Sears 1909), drug and other retail stores, and traveling salesmen. One of the latter was “Snake-Oil Johnnie” McMahon (great-grandfather of Free Inquiry magazine editor Tim Madigan), who sold his wares in New Jersey during the 1920s.

Today, non-prescription medicines are more carefully regulated, but a new form of snake oil is on the rise. Broadly termed “alternative medicine,” it includes treatments ranging from the dubious to the bizarre, from acupuncture to ozone therapy (Raso 1996). Some of the new versions of snake oil-like aromatherapy oils and the resurgent homeopathic “remedies” (which supposedly restore the “vital force”)-even come in bottles.

I am most grateful to Ranjit Sandhu for discovering the significant 1880 newspaper article.