On July 8, 1947, a New Mexico newspaper, The Roswell Daily Record, issued a stunning story about the Roswell Army Air Field: “RAAF Captures Flying Saucer on Ranch in Roswell Region,” read the headlines (“RAAF” 1947). The story came from a press release issued that same day by an eager, but relatively inexperienced, public information officer at the airfield. The next day’s paper told how rancher “Mac” Brazel had described an area of the wreckage that consisted of (in the reporter’s words) “rubber strips,” “tinfoil,” “a rather tough paper” (with “eyelets”), “sticks,” and “tape” (“Harassed Rancher” 1947). 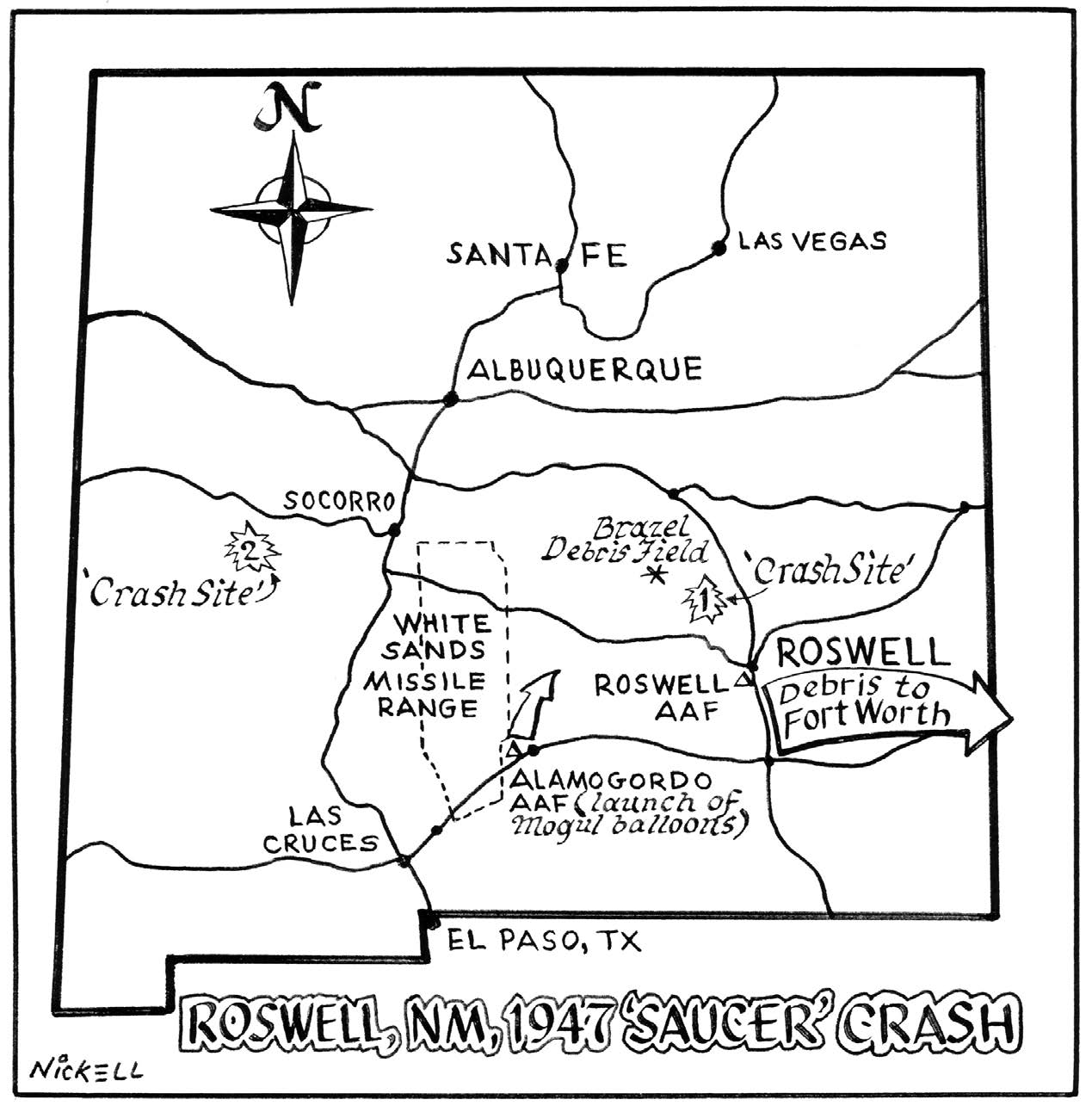 Figure 1. Map of Roswell and vicinity showing features relating to the crashed-saucer “incident” of 1947, as well as subsequent claims and revelations. (Illustration by Joe Nickell.)

If that doesn’t sound like an extraterrestrial craft, it wasn’t. It was soon identified as a weather balloon, although, in fact, as we now know, it was actually a balloon array with dangling box-kite–like radar reflectors (made of balsa sticks and foiled paper), that had gone missing in flight from a secret Project Mogul launch. Mogul was an attempt to use balloon-borne instruments to monitor sonic emissions from Soviet atomic tests. The late Charles B. Moore, former Mogul scientist, confirmed for me his identification of the Roswell wreckage as consistent with a lost Flight 4 Mogul array (Moore 1997; Saler et al. 1997; see also Thomas 1995; McAndrew 1997). Nevertheless, mysteries remain, including persistent claims that the debris was not of terrestrial origin after all.

With the flying saucer revealed as only a “weather balloon,” the Roswell story ended abruptly—or at least its public aspect did. But in the lingering and recreative memories of some of those involved, the mythmaking process began, and rumor and speculation developed in the Rowell area until conspiracy-bent UFOlogists arrived, asking leading questions and ultimately spinning a tale of government deception and cover-up. This was introduced in the book The Roswell Incident (Berlitz and Moore 1980). In time, two additional crash sites were “identified,” with claims that there were alien bodies (McAndrew 1997, 11). (See Figure 1, compiled from various sources.1)

I call this process “The Roswellian Syndrome,” and it is found in such subsequent UFO-cases-turned-conspiracies as those at Flatwoods, West Virginia, in 1952; Kecksburg, Pennsylvania, in 1965; and Rendlesham Forest, England, in 1980 (Nickell and McGaha 2012). In each case, it seems, the mythmaking continues, as mystery mongers and conspiracy hucksters mine the burgeoning accounts for more details to hype. With The Roswell Incident, some of these details concern the nature of the debris at the crash site.

Major Jesse Marcel, USAF retired, was a leading claimant. He had helped retrieve the wreckage, but in time began to make self-contradictory and inflated assertions about the amount of debris and its properties. He said that while the sticks resembled balsa, “they were not wood at all” and had “some sort of hieroglyphics on them that nobody could decipher.” (Actually, those were only little floral designs on the tape.) And of the metal, he said it was “like tinfoil, except that it wasn’t tinfoil” (Berlitz and Moore 1980, 65). Unfortunately for his credibility, Marcel also made false claims about himself—that he had a college degree, had been a pilot in World War II who had received five air medals for shooting down enemy aircraft, and other falsehoods (Fitzgerald 2001, 511; Korff 1997, 27). However, his comments about the tinfoil-like material deserved further study.

Major Marcel stated, over three decades later in 1979, that the metal was exceedingly thin. “It was possible to flex this stuff back and forth, even to wrinkle it, but you could not put a crease in it that would stay, nor could you dent it at all”—not even with a sledgehammer.2 “I would almost have to describe it as a metal with plastic properties” (Marcel 1979).

“Mac” Brazel, who actually found the wreckage, had a son Bill who echoed Major Marcel’s description. According to Bill Brazel, over the years he would pick up little pieces of the strange metal in the vicinity of the original debris. He described this as:

. . . several bits of a metal-like substance, something on the order of tinfoil except that this stuff wouldn’t tear and was actually a bit darker in color than tinfoil—more like lead foil, except very thin and extremely lightweight. The odd thing about this foil was that you could wrinkle it and lay it back down and it immediately resumed its original shape. It was quite pliable, yet you couldn’t crease or bend it like ordinary metal. It was almost more like a plastic of some sort, except that it was definitely metallic in nature. (Brazel 1979, 79)

Note that Major Marcel and Brazel’s son Bill used similar phrasing to describe the foil-like material—Marcell referring to “a metal with plastic properties” while Bill Brazel said it was “Like a plastic of some sort, except that it was definitely metallic in nature.” Unfortunately, pieces of the original material from the crash site were not kept either by Marcell or the Brazel families, both having turned in all the debris they found (Berlitz and Moore 1980, 71–72, 83–84). So, what was the metal?

I strongly suspect that the pieces Bill Brazel and others later picked up were circulated, in a sort of show-and-tell fashion, in the region in the years following The Roswell Incident. As it happens, there was considerable new debris being scattered in the area from perhaps as early as 1948 (McAndrew 1997, 42), certainly by the mid-1950s and continuing into the 1980s, that had the characteristics of the debris described by Roswell proponents. That debris came from balloons used as targets for radar-guided missiles as well as for various research projects. They were launched from Alamogordo Army Airfield (later Holloman Air Force Base) and vicinity and sent over White Sands Proving Ground. The balloons could naturally drift far afield, and bits and pieces could be scattered widely by the wind. The “strange” material attributed to the original Roswell debris allegedly came from areas northeast of White Sands (McAndrew 1997, 40–42). (Again, see Figure 1.)

These balloons were made of polyethylene—Mylar being a trademark—that had been “aluminized,” that is, coated with aluminum. The use of such material for high-altitude balloon construction was an outgrowth of research conducted by Charles B. Moore for Project Mogul (McAndrew 1997, 40). A piece of the silvery material would have been a novelty in the years following The Roswell Incident, because—while looking like aluminum foil—when crumpled it had the eye-catching ability of returning to its original shape. And it indeed had both metallic and plastic properties as described by Major Marcel and Bill Brazel.

I spoke with Charles B. Moore (1997) about this very issue. He noted that the silver-colored (aluminized) polyethylene was not available before the 1950s. (However, neither was there any record of anyone describing the Roswell metal as having uncrumpling properties before that time.) Moore believed the most likely scenario was that, sometime about 1954 or later, someone had circulated some of the aluminized Mylar they had discovered that was confused with the Roswell tinfoil.

In brief, the foil originally found among the “crashed saucer” debris by “Mac” Brazel was the same as that on the radar reflectors of Project Mogul’s flight 4 balloon array, as shown by much corroborative evidence. This includes Brazel’s own description, the photographs of the debris (McAndrew 1997, 7, 8), and the expert opinion of Charles B. Moore of Project Mogul.

In contrast, the unusual, supposedly extraterrestrial material—described as looking like metal but having plastic-like properties—fits the characteristics of aluminized Mylar, small pieces of which were subsequently found in the desert. As I have shown in simple experiments in my lab (see “The Real ‘X-Files’?” 2015), such material is exceedingly lightweight, resembles the described Roswellian material (being in fact metalized plastic), is exceedingly tough (resisting tearing and withstanding hammer blows), and—most significantly—after being crumpled resumes its original shape.

The evidence is overwhelming that the supposed “flying saucer” material was—although a novelty at the time—purely of terrestrial origin.