Hard-headed types like scientists and skeptical investigators are often seen as dour debunkers, devoid of magic and awe. We are seen as eggheads and naysayers who don’t believe anything wondrous that we can’t put under a microscope. Yet I passionately disagree; as Richard Dawkins, Carl Sagan, and others have eloquently pointed out, the skeptic’s world is not devoid of awe. Instead, we simply find wonder in the natural universe instead of a supernatural one.

In 1997 I visited two of the great mystical “energy centers” of the world: the pyramids at Ghiza and the Peruvian ruins of Macchu Picchu in the South American Andes. The Peruvian ruins sit atop a steep verdant mountain, surrounded by lower hills emerging regally from cottony white clouds. The huge stone complex, which is a remnant of the Inca civilization, was rediscovered only recently (in 1911), having escaped the Spanish Conquest because of its remote location and rugged terrain.

The ruins are one of South America’s largest tourist destinations. Minibuses crawl the zigzagging path up the mountain like a caravan of boxy ants, delivering their multicultural visitors to the top after about an hour’s journey. In my midst while viewing the ruins were two or three groups of New Age people (often distinguishable by the crystals around their necks or in their hands). They intently followed their tour guide as he described the ruins in glowing and esoteric terms, steeped in ancient wisdom and Earth-energy mysticism. The guide spoke of sacred space and of ancient shamans communing with gods and spirits. These modern-day pilgrims took photos and performed rituals and ceremonies, waving their arms slowly, claiming they were harnessing ancient energies. They seemed suitably awed by their experience. However, I had done some basic research on Macchu Picchu, and, as far as I could tell, the New Age angle was almost entirely an earnest fiction. 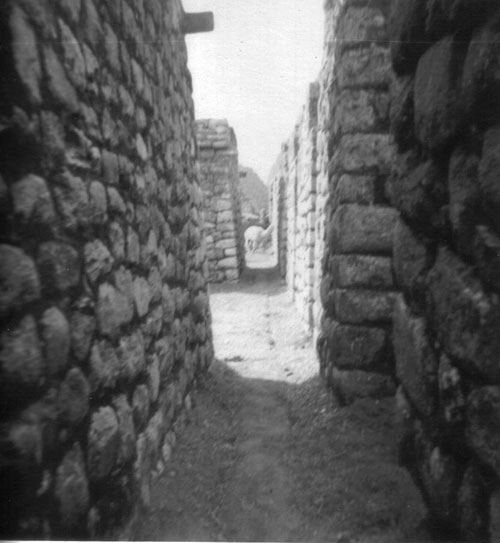 I’d read about how the Incan Empire was the most sophisticated civilization in the Andes highlands, consisting of at least 12 million people. I’d seen documentaries about the amazing road system the Incas built, stretching about two-thirds the length of South America. I’d also read about the numerous discoveries and ornate artifacts recovered from the culture. Among the most exciting was the discovery in 1995 of an Incan “ice maiden” found at a nearby mountain, Picchu Picchu. The body, found by archaeologist and mountaineering legend Johan Reinhard, was remarkably well preserved and revealed a trove of information about the Inca, such as their burial rites, diet, lifestyle, religion, and social stratification.

But somehow my travel guides, archaeology and history books, and National Geographic clippings had missed the terribly important New Age aspects of the ruins and Incan culture, such as cosmic cycles and archaeo-astronomy. There was no mention of sacred spaces or mystical Earth energies in the science-based resources I consulted. Even so, tourists flew in from Los Angeles or New York or Denver to attend the New Age tours. These pilgrims had their crystals and books and brochures, but few if any spoke more than a word or two of the local language or had the faintest appreciation for the real cultures and peoples they supposedly came to see. Judging from the questions they asked, they knew very little about the ruins that surrounded them or the culturally rich empire they represented. They didn’t seem interested in the true history of Macchu Picchu or the Inca; they were there not to learn anything new but to impose their own mystical worldviews on a foreign culture. I understand that the New Agers were sincere searchers for enlightenment, but I was sad and disappointed that they had in a real way missed the true significance of these amazing ruins and this fantastic culture. They got the touristy, New Age-lite version of the history of Macchu Picchu that bears little resemblance to reality. This sort of co-opting of indigenous peoples and their culture is crass and insulting.

I heard tourists talk about the Quechua people (a regional Indian group) and discuss among themselves the Quechua spiritual worldview. I was amazed at the patronizing tone the tourists adopted; it was a sort of false reverence for the Noble Savage, that the Indians were somehow spiritually enlightened relics for reference and reverence instead of real, flesh-and-blood humans. From a fifteen-minute lecture and a fuzzy photocopied handout, these tourists seemed to think they had a substantive understanding of Quechua culture and mysticism. A month earlier, I had spent several weeks living with a Quechua family in their home in the Amazon jungle without electricity or running water. I began as an ecotourist studying medicinal plants for a week and ended up staying longer. I learned from the family, harvested food with them, and even taught them some English in
return for their hospitality. I learned a lot
from my experience, but I would never presume to think that I had any real understanding of the Quechua, their culture, or their spiritual beliefs.

There may indeed be mystical energies permeating Macchu Picchu, but there is no reason to think that any such energy has any inherent connection to the ruins, its denizens, or its history. In fact, as National Geographic contributor Anthony Brandt wrote, “It was more likely a winter palace for an Inca emperor, populated not by priests and shamans but by nubile maidens there to serve his pampered highness.” (Frankly, I find this scenario much more titillating than the shamans.) Despite fanciful conjecture to the contrary, there simply is no evidence of any special religious or mystical energies associated with Macchu Picchu. I can understand why people would wish to believe there were (and why tourism groups would exploit and encourage that belief), but the New Age angle is anthropologically incorrect and culturally disrespectful. Macchu Picchu is an absolutely amazing, wondrous, and profound place where your spirit soars and the majesty is inescapable. Fabricating or exaggerating the significance of the ruins simply cheapens the experience.