In an earlier article, “Peddling Snake Oil” (Nickell 1998), I addressed the question of snake oil’s existence. At least one source had asserted: “There is no such thing as snakeoil, though many thousands of bottles containing stuff called snakeoil were sold to gullible patrons of carnival sideshows in the nineteenth and twentieth centuries” (Morris and Morris 1988).

Actually, real snake oil was prized for its reputed medicinal properties. However, those were modest compared to the claims of later cure-alls sold under the name “snake oil.” Here is an attempt to trace the evolution of both the product and its labeling-with examples from my personal collection (see figure 1).

Some Native Americans, including the Choctaws, reportedly treated rheumatism and other ills with applications of rattlesnake grease. The practice appears to have been copied by pioneers.

In 1880, a newspaper article on a Pennsylvania man-described as “a celebrated hunter, trapper and snake-tamer by the name of John Geer”-told how he killed rattlesnakes and extracted “oil from their bodies.” The article noted: “this oil is very usable and sells readily for $1 per ounce. It is said to have great curative powers” (“Killing Snakes” 1980).

Such a snake hunter was Peter “Rattlesnake Pete” Gruber (1858-1932) who operated a saloon and museum of curiosities in Rochester, New York. As shown in a rare photograph in my collection, he wore a snakeskin tie and coat, the latter studded with snake heads, and he sported a serpentine walking stick. He claimed an old Indian woman taught him to take out the rattlesnake fat and extract the oil to cure such ailments as rheumatism, stiff joints, carbuncles, boils, and earache. The snakes’ tissue-like outer skin was also used for poultices (Merrill 1952, 22, 27).

Another such hunter was Will “Rattlesnake Willie” Clark of Bolton, New York. According to a local tale (Lord 1999, 96):

Once he stopped at a pub to “wet his whistle” after a long day collecting snakes on Tongue Mountain. While he was imbibing, someone untied the burlap bag he had placed his captives in during the day. Suddenly cries of surprise and fear rose above the din of the bar-room as the snakes were noticed by the patrons. Willie immediately captured the half dozen escaping reptiles and returned them to the sack. The clients became very concerned, however, when old Willie admitted he could not remember if he had taken 6 or 7 of the crawling critters from the hills that afternoon. For the rest of the week the bartender kept a loaded shotgun behind the bar and visitors to the establishment carried forked sticks about with them whenever they went into the groggery.

There were many other snake hunters. In my collection is a Schoolcraft, Michigan, vendor’s license of May 26, 1881, permitting an otherwise unidentified “Snake Man” to “sell oil” for two days. I also have a 1906 postcard picturing one Abe Minckler of Kellam, Pennsylvania, a “Dealer in Snakes, Snake Skins, and Snake Oils.”

The original snake hunters metamorphed into the later medicine-show pitchmen and other vendors of “patent” medicines. (A relative few of the ready-made nostrums were actually patented, since that required disclosure of their ingredients. Instead they merely had their brand names registered.)

From a decade of collecting antique “snake oil” bottles, I have identified no fewer than seven types, as follows: 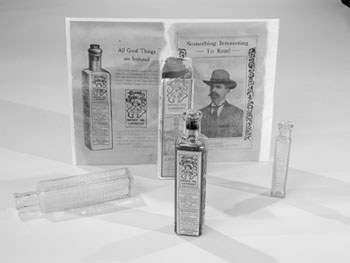 Old-fashioned snake oil has largely disappeared. (One exception is a small bottle of Aceite de Culebra-snake oil-I picked up in Mexico. Sold as an “Emollient-For External Use Only,” it contains “cod liver oil and mineral oil.”)

Although I cannot attest to the effectiveness of genuine rattlesnake oil, many of the snake-oil liniments of yesteryear no doubt provided some relief to aching muscles and certain other minor afflictions-much like today’s popular heat rubs and other topical medicines.

But just as snake-oil liniments were eventually overtaken by outrageous cure-alls, so are today’s respectable over-the-counter medicines suffering unfair competition from various “alternative” treatments that range from the ineffective to the dangerous. In that sense, snake oil is not so much an outdated term but one that needs updating from time to time.

Rob McElroy helped find many of the snake-oil bottles in my collection.