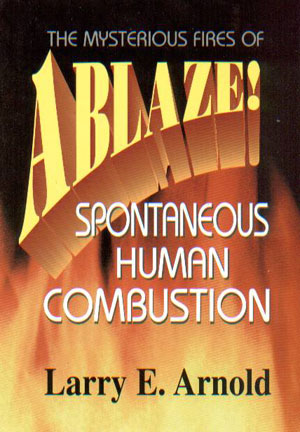 In my column in Skeptical Inquirer (November/December 1996), I dealt with the major cases of alleged spontaneous human combustion (SHC) reported in Larry E. Arnold’s book Ablaze! The Mysterious Fires of Spontaneous Human Combustion (1995). Although that selection revealed some of the pseudoscientific attitudes behind SHC, it perhaps did not go far enough to reveal just how silly some of the cases attributed to the imagined phenomenon are.

One such case in Ablaze! is that of a “baffling” and “abnormal fiery accident” that occurred “about fifteen miles southeast of Baltimore, in Arundel [sic] County, Maryland” (actually Anne Arundel County). The date is rather vaguely given as “early April 1953,” a curious way of expressing it, since the accident transpired on April 1 (Baltimore Sun, April 2, 1953). Arnold provides not a single source citation for the case other than to quote briefly the late Frank Edwards, one-time columnist for Fate magazine and author of several mystery-mongering books, like Stranger Than Science, notorious for their errors and exaggerations.

As Arnold relates the case:

Here, Maryland and State Police found Bernard J. Hess in his overturned car at the bottom of a twenty-foot embankment. The Baltimore man had a fractured skull. Therefore, the cause of death appeared obvious, the case routine. Then the coroner investigated. Routine quickly ceased. Although he found no trace of fire damage to the wreckage, the coroner discovered first- and second-degree burns covered two-thirds of the dead man’s fully clothed body. Police failed initially to notice Hess’s searing because . . . well, because his garments hadn’t burned!

Authorities concluded that Hess’s severely blistered skin would make it impossibly painfully [sic] for him to dress himself after being burned. Contemporary reports do not mention officials finding any electrical or fuel problems with the car that would have caused his injuries.

Did Hess fall victim to foul play at the scene, as unknown assailants stripped Hess naked, doused him with unidentified chemical accelerants and lit them, then re-dressed and drove their victim to a location remote from the crime to push him over the embankment in his car? No evidence supported this. Did Hess succumb to SHC?

As Frank Edwards remarked three years after this incident: “The burns which played a part in his death constitute another mystery which remains unsolved.”

Whereas Arnold insists that “contemporary reports” give no clue to the mystery, in fact newspaper accounts actually report the official medical examiner’s determination. First, however, the reader is invited to provide a plausible solution to the mystery. There are several potential hypotheses, each more credible than spontaneous human combustion, but you may ignore Arnold’s deliberately silly scenario of “unknown assailants” stripping, burning, and re-dressing the victim. Instead, simply consider the circumstances of an overturned car and the damaged skin coupled with unburned clothing. Please pause here to construct your hypothesis.

Finished? My own analysis began with the possibility that Mr. Hess had simply been scalded by hot water from a ruptured radiator — or from the heater core located in the dashboard. Apparently that was not the true solution, but it certainly represented a hypothetical solution. According to the Baltimore Sun of April 3, 1953, “Gasoline ‘burns’ on the body of Bernard Joseph Hess . . . had nothing to do with his death, an autopsy yesterday disclosed.” Dr. Russell S. Fisher, Baltimore’s chief medical examiner, stated that the 35-year-old Hess died of head injuries suffered when the convertible he was driving overturned on April 1. Dr. Fisher said that gasoline had soaked through the victim’s clothing to inflict what the Sun called “skin injuries similar to burns” caused by a reaction to the fuel. The Baltimore News-Post (April 2, 1953) cited an assistant medical examiner who provided a concurring opinion: “The examiner, Dr. Francis J. Januszeski, said gasoline is an ‘organic solvent,’ used in cleaning to remove grease, and has somewhat the same effect on flesh.”

Interestingly, Bernard “Whitey” Hess was a convicted forger who had been released on probation. He had used another man’s credentials to pose as a potential auto buyer and thus steal the convertible in which he died. His wife — then serving a sentence for embezzlement — was notified in jail of his death (Baltimore Sun, April 2 [evening ed.] and 3, 1953).

Obviously, the Hess case had nothing to do with spontaneous human combustion, as Larry Arnold should have realized. Arnold, who is not a physicist but a Pennsylvania school bus driver, had no justification for asking ominously, “Did Hess succumb to SHC?” The unburned clothing should have led any sensible investigator to one of the possibilities limited by that fact: for example, that Hess had been burned previously, or his skin injuries were caused by steam or hot water, chemical liquids or vapors, or some type of radiation (possibly even extreme sunburn through loosely woven clothing). In any event, Arnold could have done as I did and sought out the newspaper accounts of the day. It would have saved him from yet another folly.

I am grateful to my co-workers Vance Vigrass, Dana Walpole, and Etienne Ríos for their helpful suggestions and discussions.