This past March, the Tampa Bay Skeptics (TBS), as well as some other skeptics groups, received a letter from Jamal N. Hussein, Ph.D., director of Paramann Programme Labs in Amman, Jordan. Following are brief excerpts from his two-page letter.

“This project was started ten years ago by a group of scientists in different fields of medicine and experimental physics . . . for studying the paranormal immunities [Super Reactions (SR)] to pain, bleeding and infection possessed by swamis and gurus, who can ram sharp objects through their bodies without feeling pain or having serious wounds. . . . We recently became able to . . . bestow SR [spontaneously] . . .to all people without restrictions or reservations. . . . It looks as if this technique [connects] the human body to a certain source of unknown energy which . . . protects [it] from any harm resulting from driving swords and sharp objects into it. . . . These techniques show 100% success when applied to different persons, including those who had had no idea about the expected results of the techniques. . . .We hope that our Programme will be of interest to you so that we can conduct joint research in fields of mutual interest.” 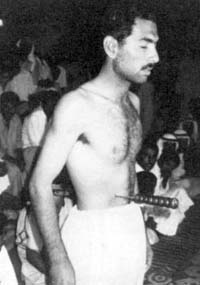 On April 8, after sharing Dr. Hussein’s letter with the TBS members attending our meeting, I replied on behalf of TBS. Noting our standing “$1,000 Challenge” for “verifiable proof of any paranormal phenomenon,” I informed Hussein that if he could demonstrate to us that the claims in his letter were true, “that would suffice.” I continued: “If you would like to visit the United States, specifically sunny Florida, we would love to test your claim, and would be agreeable to increasing our award to $10,000 if you were to exhibit no signs of pain or injury as we passed a knife through your body. Of course, we would have the police present to verify that we were doing this at your request. And, despite your claimed ‘100% success’ rate, as a physician I would be able to properly dress your wounds.”

I then received a May 10 letter from Louay J. Fatoohi of the physics department at Durham University, Durham, England, “on behalf of my colleague, Dr. Jamal Hussein, he will be on the East Coast next month and would be pleased to meet you and members of your committee. Dr. Hussein would therefore like to know how to arrange for the suggested meeting.” I replied on May 15, again on TBS stationery, which contains both our address and telephone number: ” . . . It is hard to believe that your colleague is prepared to be stabbed with knives. . . . Nevertheless, TBS is prepared to put him to the test. . . . You might send me a copy of Dr. Hussein’s plans for visiting the eastern U.S., including specific dates on which he could be available for testing.” 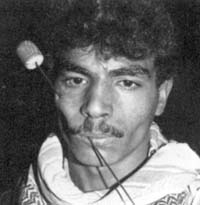 We heard nothing more until a July 25 mailing arrived from Paramann containing seven snapshots and a three-part article (co-authored by Hussein, Fatoohi, and two others) titled “The Deliberately Caused Bodily Damage Phenomena: Mind, Body, Energy or What?” which was published in the September, October, and November 1994 issues of the International Journal of Alternative & Complementary Medicine. An editor’s note accompanying the first installment of the article stated the following: “If the claims which are made in the article can be reproduced please do not try any of these methods on yourself or your patients! we would have a powerful method to use against trauma and pain.”

Unfortunately, despite our efforts, and our $10,000 offer, the Tampa Bay Skeptics was denied a unique opportunity to test these techniques on Dr. Hussein himself.

Several days prior to publication, I received another mass mailing, dated August 20, from Paramann Programme Labs. Their new letterhead now contains an e-mail address, that of L. Fatoohi, to which I promptly sent an inquiry. In his reply, Fatoohi apologized for not having answered my May letter, and informed me that Dr. Hussein had to cancel his planned trip to the U.S. “for personal circumstances.” I will be continuing my dialogue with Fatoohi, and will submit additional reports.

Gary Posner, M.D., is founder of Tampa Bay Skeptics and a CSI scientific consultant. His website is gpposner.com.