In Tallahassee’s Old City Cemetery stands an imposing monument that—many people insist—denotes the grave of a witch. Curious symbols atop the marker and a cryptic verse, together with other factors—notably the monument’s facing west rather than the traditional east—are cited as evidence in the identification. But was “BESSIE,” as her name is boldly incised, truly a witch, or can we unlock the secrets of this mysterious grave? (See Figure 1.) 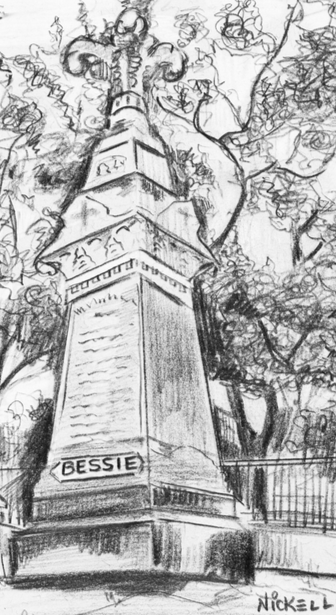 Old City Cemetery, established in 1829, is the oldest public graveyard in Tallahassee. Once scandalously overrun by hogs and cattle, it was acquired by the city in 1840. It was laid out in lots the following year when an epidemic of yellow fever swept the area, mandating sanitation regulations to protect the public. Originally burials were segregated, with the graves of whites restricted to the eastern section, while both slaves and free persons of color were interred in the western half. Today the cemetery is considered “one of Tallahassee’s most distinctive historic sites” (“Walking Tour” n.d.).

The grave markers reflect the evolving attitudes about death in popular culture. While the earliest—wooden head- and footboards—have deteriorated, later marble tombstones of simple shape bear inscriptions expressing loss or hope. Later Victorian monuments reveal that era’s emphasis on classical art forms, as well as on death and mourning.

In the southeast quadrant (bordering Martin Luther King Boulevard) is “The Witch’s Grave,” as it is now known far and wide, marked by a towering obelisk of elaborate Victorian design, its gray French granite estimated to weigh more than fifteen tons. The grave is that of Elizabeth Budd Graham (1866–1889), and the inscription also provides her nickname, “Bessie”; her husband’s and parents’ names; a verse; and other information. The most-sought grave in the cemetery, it often bears coins or other mementoes left by visitors.1

Some of the “witch” claims are set forth in Haunted Places: The National Directory (Hauck 1996, 129), as well as some online sources. As we shall see, they are based on whimsy, superstition, ignorance, and misinformation. Let’s look at the main claims.

A newspaper obituary for Bessie Graham noted that, the mother of an infant, she was “the lovely young wife of Mr. John A. Graham,” who “loved and adored his wife with all the affection possessed by human nature.” She herself exhibited “rare personal beauty and excellent traits of character” (“Obituary” 1889).

Her husband was a lumber magnate, a cattleman, and leading real estate developer of southern Florida. In 1894, he remarried and still later, despite his age, volunteered to serve in World War I, earning the rank of major (Moore 1922, 248, 387). Meanwhile he raised his and Bessie’s son, John A. Jr.

Other information about Bessie is scant, although her monument—properly read—tells more. As an obelisk, its form “was meant to represent rebirth and the spiritual connections between Heaven and Earth, life and afterlife” (Lorentz 2014). Near the top, the cross and crown not only express Christian belief, but the motif is also used in Freemasonry (and indeed, not surprisingly, her husband was a Mason). The verse’s invocation of the tolling (church) bell, “saintly soul,” and singing of “funeral song” all evoke traditional Christian worship, which, in Bessie’s time and place, were antithetical to witchcraft. Although graves traditionally faced east for the rising sun (a symbol of resurrection), the westward orientation would be consistent with Victorian emphasis on dying, sadly evoking the setting sun.

Still, slanders and errors about Bessie continue. One source, a YouTube video, is so egregious I am embarrassed for its amateur raconteur (Mohan 2016). Without offering any evidence, he claims that Bessie was rumored to have been poisoned and suffered “a long, painful death” (although she actually died of heart trouble after a brief illness [“Obituary” 1889]). He says the ghost of a young woman is seen sobbing at the grave (but this too appears suspiciously to lack any source). He insists actual witches perform nighttime rituals at the grave during the full moon (but these are unknown to the cemetery’s management), and he states that anyone visiting the grave will have Bessie appear in his or her dream “that very night” (yet I can attest that that never happened to me).

Everything we know of Bessie Graham speaks of the tragically brief life of a very good woman. Nothing whatsoever has come to light to warrant insinuations about her having been a witch—no document or even folklore from her time. There is nothing but nonsense, and most of that is apparent fakelore and social-media talklore. All of it is born of ignorance or mischief—leading to the careless defamation of her name, the wanton misappropriation of her legacy, and—in a very real sense—the shameful desecration of her grave.