About two years ago during a conversation, a friend of mine mentioned a movie she thought I’d really like. In fact it was a documentary, and as a fan of
docs, I was eager to hear more about it. “You’d find it interesting,” she said. “It’s kind of about stuff you investigate. It’s called What the Bleep Do We Know!? Have you heard of it?”

I had indeed heard of the film, a New Agey jumble of pseudoscience and mysticism about supposed links between consciousness and quantum physics, produced
by followers of J.Z. Knight, a woman who claims to dispense in­formation from a 35,000-year-old ghost. In fact, I had done my best to keep it from
misinforming the public when it was first released, writing a few short skeptical pieces about it.

Not wanting to get into an argument with my friend, I just let the conversation trail off. But before I did, she made an interesting comment: “To be honest
I didn’t really understand a lot of it. . . . But you’re really smart—you would get it.”

Most commonly, the person assumes, as my friend did, that the problem lies with the listener. Her (quite reasonable) assumption was that the film was
comprehensible and that if she didn’t understand it, it was due to her limitations or lack of knowledge. This was a mainstream, feature-length documentary
film with some famous people in it—in­cluding physicists. Surely these people would not appear on camera discussing self-evidently nonsensical ideas such
as that thoughts can control reality.

Less often, the problem lies with the speaker’s inability to effectively communicate—perhaps he or she does not share the same native language as the
listener, is disorganized, or has a speech impediment for example. In this case the information and message may be correct and clear, but communication
does not occur because of a problem with the source.

Sometimes the problem lies neither with the listener nor with the speaker, but instead in the content. In this case, the reason that the listener doesn’t
understand what is being said is that what is being said makes little or no sense by any objective measure. This is in­sidious and difficult to
detect because people do not like to challenge authority on a topic they are presumably trying to become educated about—especially in public. The speaker
is not talking gibberish; quite the opposite: he or she may be very eloquent. Furthermore, identifying nonsense often requires some basic understanding of
the subject. 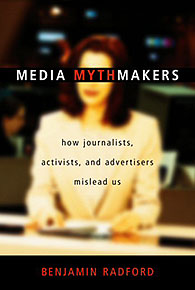 In my book Media Mythmakers: How Journalists, Activists, and Advertisers Mislead Us I discuss this phenomenon at length and refer to it as “the
illusion of meaning.” As children we are taught to assume that the words we hear and read have meaning and comprehensible content. When we hear information
we don’t understand, the common, default assumption is that we just don’t get it—not that the authoritative person we’re listening to is speaking nonsense.
Yet as we grow older, we are sometimes faced with “information” devoid of content—grammatically correct and often impressive words that are either patently
untrue, self-contradictory, or simply meaningless.

Too often we are embarrassed to admit that we don’t understand what we are told. We don’t want to appear stupid to the speaker or others in the audience.
But more people should ask questions, because others may be just as confused but not want to speak up. There is no shame in not understanding something,
and it’s a good lesson to remember that. Asking for clarification not only helps both the speaker and listener communicate more effectively, it is also a
powerful tool in revealing bullshit.

Fuzzy thinking and fuzzy language often go hand in hand. Purveyors of pseudoscience usually use vague terms with unclear meanings and definitions. New Age
healers, for example, use words and scientific-sounding phrases like “human energy field” and “vibrational frequency” without understanding (or clearly
explaining) what it is that they are talking about. This is a case where skeptics should be emboldened to raise their hands and ask, “I’m sorry, I don’t
understand what you’re saying. . . . What vibrations are you talking about? What exactly is this ‘energy field,’ and how can science detect it?”

The next time you hear something you don’t understand, ask for clarification. You don’t have to be apologetic about it, and the situation doesn’t have to
be confrontational. Those with science and facts and evidence on their side will be happy to explain what they mean. If the speaker cannot explain what he
is talking about in plain language—or without resorting to other, even less clear terms and concepts—that’s a warning sign that there’s confusion on both
ends of the line.