Combining myths of the American Sasquatch—better known since 1958 as “Bigfoot”—and various swamp monsters, Florida’s “Skunk Ape” is reportedly a large,
shaggy, man-beast that haunts, especially, Florida’s wilderness areas (Coleman and Huyghe 1999, 56–57). On a trip to the state’s
Panhandle region in October 2011, I was able to begin to look into the various legends and sightings—first, with a day’s excursion into the remote Tate’s
Hell1 wilderness area (Figure 1) and part of a night in the Apalachicola National Forest with Dr. Gary A. Stillwell as guide, and, second,
research trips to the state’s Wildlife Commission offices and State Library and Archives of Florida in Tallahassee. 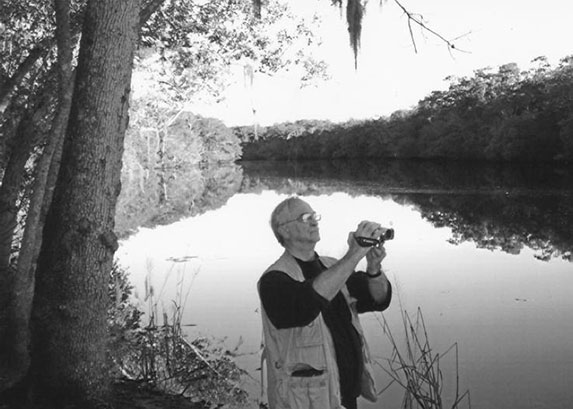 I have since conducted much additional re­search on the fabled creature, which is essentially only a regional variant of the North American Bigfoot
itself—see my “Bigfoot Lookalikes” (Nickell 2013). (After the Pacific Northwest, Florida and Pennsyl­vania are the most Bigfoot-reported regions of North
America—at least through 1980 [Nickell 2011, 225].) In addition to Skunk Ape, it has been called Stink Ape, Skunk Man, Skunk Monkey, Swamp Man, The Swamp
Monster, and, among many others, the Bardin Booger. (The latter beast—reported in the region around the logging community of Bardin—is a sub-variant,
itself having such names as Wooly Booger, Bardin Goomer, and several others, including even The Boogie Man, a name that reveals something of its status as
a folk monster [Jenkins 2010, 80, 102].) Here is some of what I discovered about the Skunk Ape.

Physical description. The Florida Skunk Ape has generally black or “dark” long hair or fur—one report described it as seemingly “covered in fur, as if wearing a fur coat”
(Jenkins 2010, 114). It may also be brown, or—in one 1848 instance—white. It has a large, round head with big, shining eyes, no appreciable neck, and
broad, rounded shoulders. When standing upright, it has “long dangling arms,” in one case being ob­served “swinging its arms as dogs yapped at it” (Bord
and Bord 2006, 244).

However, it is seen in various positions: one creature was “close to the ground, as if kneeling,” while another “stood up in a half crouch,” then took a
“huge stance with hunched shoulders”; still another was “a huge shape” that “stood up,” while often the creatures were first seen standing, watching
people. Estimates of its height vary greatly, from as short as four feet to as tall as ten, but the average is 7.45 feet (slightly smaller than the overall
North American Bigfoot average of 7.57, determined from the 1,002 cases cited previously). Limited estimates of its weight yield an average of 508.3
pounds.2 Its gait is sometimes said to be unusual—for instance, “exaggerated.” One witness said the creature “wobbled” as it walked (Jenkins
2010, 96, 105).

Behavior. The Skunk Ape’s behavior is typically similar to that of Bigfoot everywhere. It is frequently seen standing among trees, crossing a road (and
occasionally being hit by a car), rummaging in garbage, drinking water or catching fish from a lake or stream, visiting campsites, standing to peer into
windows, and so on. It typically vocalizes by growling, grunting, grumbling, or producing “stressed breathing” and, at least once, “clicking sounds,” among
others (although at times there is no sighting and so no certainty that the sound was that of a Skunk Ape) (Jenkins 2010, 111, 117, 123).

Habitat. Skunk Apes are encountered generally in remote areas, notably forests and swamps, including the Everglades, as well as other national and state parks.
They are attracted to human habitations—campsites, cabins and other outlying homes, and garbage dumps—in search of food (Jenkins 2010, 77–128).

Sign. Any evidence that a certain type of animal has been in a given area is called its sign. This can include tracks, indications of feeding (such as food
remnants), scat (fecal matter), and the like. In the seventy-seven cases studied, the Skunk Ape’s signs include large tracks, typically up to 17.5 inches
and with five toes (Bord and Bord 2006, 257, 262). Other on-site indicators were broken branches, a puddle of apparent urine, and uprooted plants (Jenkins
2010, 88, 95, 101).

As it happens, there is a known animal that actually has the foregoing characteristics: the black bear (Ursus americanus). It is typically covered
with shiny black fur and has a tan or grizzled snout. Black bears can also be other colors, including cinnamon and even white (Herrero 2002, 131–32). A
large one can stand seven feet tall (Yosemite 2013), weighing in the range of 203–587 pounds (Whitaker 1996, 703). When it stands, its “arms” dangle. It
has a big head, large shining eyes, “no neck” (as is said of the Skunk Ape), and rounded shoulders.

Bears can be malodorous, and some people claim they can smell them when they are nearby (Herrero 2002, 115). Since bears often scavenge on dead animals and
rummage in garbage bins and open dumps (Herrero 2002, 43, 156; Whitaker 1996, 706), they might be expected sometimes to be “smelly.”

Bears stand on their hind legs for various reasons, such as when necessary to peer in a window or when trying to sense something, sniffing the air. They
can walk in ungainly fashion this way. States one expert, “No doubt the ability of bears to stand on two feet has influenced some people’s perception of
them as being humanlike . . .” (Herrero 2002, 139). Indeed, the bear’s hind footprint is “remarkably human-like,” especially when, in late summer, the
claws are worn and “may not show up at all” in its tracks. At moderate speeds the hind and fore feet may superimpose to “give the appearance of a single
track made by a bipedal creature” (Napier 1973, 150–51).

Bears behave like Bigfoot often does. They stand and watch people, visit their camps and homes, wade in streams seeking fish, climb trees for protection,
and so on. They vocalize with growls, snorts, and loud huffing noises; common defensive display is “blowing with clacking teeth” (Whitaker 1996, 703–706;
Herrero 2002, 15, 16, 115; Rogers 1992, 3–4).

Black bear habitat is similar to that of Bigfoot, since it consists of “primarily forests and swamps” (Whitaker 1996, 704). The big mammals once occupied
all of Florida’s mainland, as well as some coastal islands and the larger Keys, but settlement reduced their range to scattered core areas now designated
as primary range (containing core bear population) and secondary range (where bear movement is also significant although the range is less optimal) (“Black
Bears” 2013). In addition to tracks, scat, and other signs, bears leave feeding signs that include broken vegetation (mangled berry patches, broken
fruit-true branches, uprooted plants) and remnants of carrion and large prey.

Here are a few reports of Florida Skunk Ape encounters that could be explained as misidentifications of bears:

• In 1957, in the Everglades in late afternoon, a wild-boar hunter encountered “What looked like a bear squatting,” but then “the thing slowly stood up to a
staggering height of about eight feet.” As he backed away out of the dark thicket, he glimpsed sunlight on the eyes yielding “a yellow-orange glow like the
eyes of a wild animal,” and the hunter ran to his truck (Jenkins 2010, 89–90.). Apparently the only thing that made him think the bearlike creature was not
a bear was his mistaken belief that bears do not stand upright.

• In 1960, in a sparsely populated area near Hollywood (near the outskirts of the Everglades), an “adolescent skunk ape” walked out of a drainage ditch
after midnight, then stood in the center of the road. From fifty yards away, the driver of a car saw that the creature was no more than five feet tall, had
long arms and a round head. It was “covered in dark fur and had no observable facial features” (Jenkins 2010, 91–92).

• In 1969, near Davie, Florida, a man encountered a “smelly, growling Bigfoot” in an abandoned guava orchard, and another man saw a “huge black Bigfoot
treed by dogs” in an orange grove; “it swung away through the trees,” then dived into a canal (Bord and Bord 2006, 256). Black bears feed on various fruit
and even climb trees for food, with broken fruit-tree branches being among the common signs of black-bear activity (Whitaker 1996, 703, 705). I suspect the
phrase swung away through the trees in the account crept in because of the notion that Skunk Apes are apelike; I suggest the man misperceived how
the bear made its mad scramble through the branches to the canal.

• In 1971, at Crystal River, four men saw four manlike animals on an embankment outside “a massive forest.” They were picking at some plants (later found
“pulled away from the earth”). The creatures were furry “from head to toe” and had “long arms and large heads that were not proportionate to their bodies”
(Jenkins 2010, 100). The description is quite similar to bears, among whose feeding signs is “ground pawed up for roots” (Whitaker 1996, 703).

Of course not all Skunk Ape reports represent sightings of bears. Some are the product of folklore (as Jenkins [2010, 79–81] readily admits), or the
misidentification of other wildlife (especially those “encounters” consisting of northing more than sounds or eyeshine), and many could well be outright
hoaxes. In fact, Bigsuit-style pranks were common regarding north-central Florida’s Skunk Ape known as the Bardin Booger (Daegling 2004, 237–45).

However, considerable evidence suggests that bears, which are known to exist, can be mistaken for the Skunk Ape as well as Big­foot in general, the
existence of which lacks proof. We must recall the principle of Occam’s razor (named for fourteenth-century philosopher William of Ockham), which holds
that the simplest tenable explanation—the one with the fewest assumptions—is most likely to be correct.

In addition to Dr. Gary A. Stillwell, to whom I am most indebted, I am also grateful to the staff of the State Library and Archives of Florida in
Tallahassee, to CFI Libraries Director Tim Binga, and CFI Librarian Lisa Nolan.

1. Tate’s Hell State Park is said to be “One of the prime habitats for the swamp-dwelling Sasquatch” (Hinson 2010).